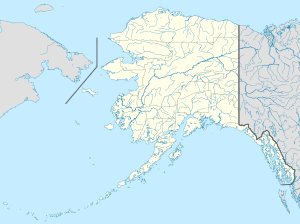 King Island (Inupiaq: Ugiuvak; Russian: Остров Кинг) (King's Island in early US sources) is an island in the Bering Sea, west of Alaska. It is about 40 miles (64 km) west of Cape Douglas and is south of Wales, Alaska.

King Island, Alaska. The large boulders on the top of the island are barely visible through the fog.

King island is a small island located about 40 miles (64 km) offshore, south of the village of Wales, Alaska and about 90 miles Northwest of Nome. The island is about 1 mile (1.6 km) wide with steep slopes on all sides. It was named by James Cook, first European to sight the island in 1778, for Lt. James King, a member of his party. It is part of the Bering Sea unit of the Alaska Maritime National Wildlife Refuge.

The island was once the winter home of a group of about 200 Inupiat who called themselves Aseuluk meaning "people of the sea" or Ukivokmiut, from Ukivok, the village of King Island and 'miut' meaning "people of" or "group of people".

The Ukivokmiut spent their summers engaging in subsistence hunting and gathering on King Island and on the mainland near the location of present-day Nome, Alaska. Their winters were spent in other subsistence activities, particularly such as hunting and fishing on the ice. Subsistence activities on and around the island included hunting seals and walruses, crab fishing and gathering bird eggs and other useful foods. The spring and summer was the important time of gathering to the Ukivokmiut, while the winters were the time of dance.

Due to the limited daylight during the winter, the days were spent dancing in the "Qagri", or men's communal house. As an example, the month of December is known to the Ukivokmuit as "Sauyatugvik" or the time of drumming.

After the establishment of Nome, the islanders began to sell intricate carvings to residents of Nome during the summer.

In the mid 1900s the Bureau of Indian Affairs closed the school on Ukivok, forcefully taking the children of Ukivok to go to school on mainland Alaska, leaving the elders and adults to gather the needed food for winter. Because the children were not on the island to help gather the needed food for winter, the adults and elders had no choice but to move to mainland to make their living. By 1970, all King Island people had moved to mainland Alaska year-round.

King Island first appeared on the 1880 U.S. Census as the unincorporated native eskimo village of "Ookivagamute." In 1890, it returned as Uġiuvak. It next appeared in 1910 as King Island and would continue to report until 1960, with the exception of 1950 when no figure was reported. It next reported as Uġiuvak again, classified as a native village (ANVSA) in 1980 and 1990, but with no residents. It has not reported since.

All content from Kiddle encyclopedia articles (including the article images and facts) can be freely used under Attribution-ShareAlike license, unless stated otherwise. Cite this article:
King Island (Alaska) Facts for Kids. Kiddle Encyclopedia.