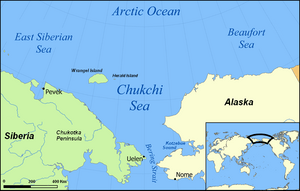 Map of the Chukchi Sea.

Chukchi Sea is a marginal sea of the Arctic Ocean. It is bounded on the west by the De Long Strait, off Wrangel Island, and in the east by Point Barrow, Alaska, beyond which is the Beaufort Sea. The Bering Strait forms its southernmost limit and connects it to the Bering Sea and the Pacific Ocean. The main port on the Chukchi Sea is Uelen in Russia. The International Date Line crosses the Chukchi Sea. It is moved east to avoid Wrangel Island as well as the Chukotka Autonomous Okrug on the Russian mainland.

The sea has an area of about 595,000 km² (230,000 mi²). It can only be travelled about four months of the year. The Chukchi Sea has very few islands compared to other seas of the Arctic. Wrangel Island is at the northwestern limit of the sea, Herald Island is near its northern limit, and a few small islands are along the Siberian and Alaskan coasts.

The sea is named after the Chukchi people. The live on its shores and on the Chukotka Peninsula. The Chukchi worked at fishing, whaling and the hunting of walrus in this cold sea.

The polar bear is found on pack ice of the Chukchi Sea; in fact, the population of polar bears that is found in the sea and its pack ice is one of the five genetically distinct Eurasian populations of this species.

The Chukchi shelf is believed to hold oil and gas reserves as high as 30 billion barrels. Several oil companies have competed for leases on the area, and on 6 February 2008, the U.S. government announced the successful bidders would pay US$2.6 billion for extraction rights. The auction has drawn some criticism from environmentalists.

All content from Kiddle encyclopedia articles (including the article images and facts) can be freely used under Attribution-ShareAlike license, unless stated otherwise. Cite this article:
Chukchi Sea Facts for Kids. Kiddle Encyclopedia.