The North American river otter (Lontra canadensis), or the common otter, is an aquatic mammal native to only North America in the countries Canada, and the United States. River otters are a distant relative of the weasel family. North American river otters can reach a length of 3.9 ft and weigh 3 lbs. The river otter's life expectancy is 10 to 15 years in the wild and 25 years in captivity. The main habitat of the river otter are near freshwater rivers, streams, lakes, ponds, marshes, swamps, and coastal waters. They prefer fish, though they will eat amphibians such as frogs, turtles, and crayfish. They have also been reported to eat small mammals and birds.

About 290 North American river otters are currently in captivity. 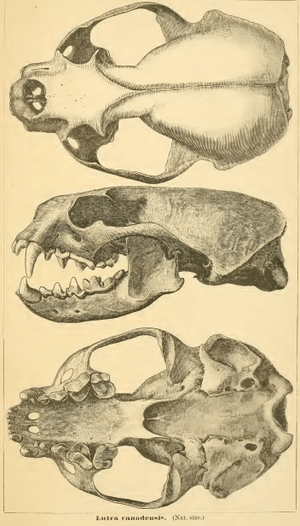 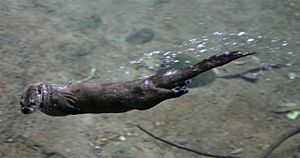 The North American river otter's streamlined shape allows it to glide through the water.

The North American river otter is a stocky animal of 5 to 14 kilograms (11 to 31 lb), with short legs, a muscular neck no smaller than the head, and an elongated body that is broadest at the hips. They have long bodies, and long whiskers that are used to detect prey in dark waters. An average adult male weighs about 11.3 kilograms (25 lb) against the female's average of 8.3 kilograms (18 lb). Its body length ranges from 66 to 107 centimetres (26 to 42 in). About one-third of the animal's total length consists of a long, tapered tail. Tail lengths range from 30 to 50 centimetres (12 to 20 in). Large male North American river otters can exceed a weight of 15 kilograms (33 lb). It differs from the European otter by its longer neck, narrower visage, the smaller space between the ears and its shorter tail.

A broad muzzle is found on the North American river otter's flat head, and the ears are round and inconspicuous. The rhinarium is bare, with an obtuse, triangular projection. Eyes are small and placed anteriorly. A short, broad rostrum for exhaling and a long, broad cranium define the relatively flat skull. The North American river otter's nostrils and ears close during submersion, keeping water from entering them. Its vibrissae (whiskers) are long and thick, enhancing sensory perception underwater and on land.

The fur of the species is short (guard hairs average 23.8 mm (0.94 in)), with a density of about 57,800 hairs/cm2 (373,000 hairs/in2) in the midback section. The pelage has a high luster and varies from light brown to black. The throat, chin, and lips are grayer than the rest of the body. Fur of senescent river otters may become white-tipped, and rare albinos may occur.

The North American river otter is sexually dimorphic. Males are, on average, 5% larger than females. In Idaho, juvenile, yearling, and adult males averaged 8, 11, and 17% heavier, respectively, than females of the same age. A clinal reduction in size may exist from north to south along the Pacific coast, but not from east to west.

North American river otters live an average of 21 years of age in captivity, but they can reach 25 years of age. In the wild, they normally live about 8 to 9 years in the wild, but are capable of living up to 13 years of age.

North American river otters are active year-round, and are most active at night and during crepuscular hours. They become much more nocturnal in the spring, summer, and fall seasons, and more diurnal during winter. They may migrate as a result of food shortages or environmental conditions, but they do not migrate annually. North American river otters only settle in areas that consist of vegetation, rock piles, and sufficient coverage.

North American river otters swim by quadrupedal paddling, forelimb paddling, alternate hind-limb paddling, simultaneous hind-limb paddling, or body and tail dorsoventral undulation. The tail, which is stout and larger in surface area than the limbs, is used for stability while swimming and for short bursts of rapid propulsion. While swimming at the surface, the dorsal portion of the North American river otter's head, including nostrils, ears, and eyes, is exposed above water. It must remain in motion to maintain its position at the surface.

Sliding across ice is an efficient means of travel. Note the long, tapered tail.

On land, the North American river otter can walk, run, bound, or slide. Foot falls during walking and running follow the sequence of left limb, right limb, right limb, left limb. During walking, the limbs are moved in a plane parallel to the long axis of the body. Bounding is the result of simultaneous lifting of the limbs off the ground. As the front feet make contact with the ground, the back feet are lifted and land where the front paws first contacted the ground, producing a pattern of tracks in pairs typical of most mustelids. Sliding occurs mostly on even surfaces of snow or ice, but can also occur on grassy slopes and muddy banks. Sliding across snow and ice is a rapid and efficient means of travel, and otters traveling over mountain passes, between drainages, or descending from mountain lakes often slide continuously for several hundred meters. Rear leg paddling enables continuous sliding where gravity is an insufficient or an opposing force. During winter, the North American river otters heavily use openings in the ice, and may excavate passages in beaver dams for accessing open water. 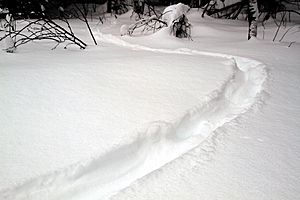 Tracks in the snow

North American river otters are renowned for their sense of play. Otter play mostly consists of wrestling with conspecifics. Chasing is also a common game. North American river otters rely upon play to learn survival skills such as fighting and hunting. However, playful behavior was found in only 6% of 294 observations in a study in Idaho, and was limited mostly to immature otters. 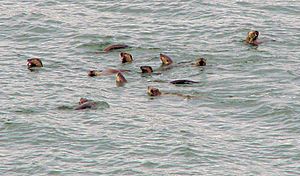 Prey is captured with a quick lunge from ambush, or more rarely, after a sustained chase. North American river otters can remain underwater for nearly 4 minutes, swim at speeds approaching 11 km/h (6.8 mph), dive to depths nearing 20 m (22 yd), and travel up to 400 m (440 yd) while underwater. Several North American river otters may even cooperate while fishing. Small fish are eaten at the surface, but larger ones are taken to the shore to be consumed. Live fish are typically eaten from the head.

North American river otters dry themselves and uphold the insulative quality of their fur by frequent rubbing and rolling on grass, bare ground, and logs.

A highly active predator, the North American river otter has adapted to hunting in water, and eats aquatic and semiaquatic animals. The vulnerability and seasonal availability of prey animals mainly governs its food habits and prey choices. This availability is influenced by the following factors: detectability and mobility of the prey, habitat availability for the various prey species, environmental factors, such as water depth and temperature, and seasonal changes in prey supply and distribution in correspondence with otter foraging habitat.

The North American river otter is more social than most mustelids. In all habitats, their basic social group is the family, consisting of an adult female and her progeny. Adult males also commonly establish enduring social groupings, some documented to comprise as many as 17 individuals. In coastal areas, males may remain gregarious even during the estrous period of females. Family groups may include helpers, which can be made up of unrelated adults, yearlings, or juveniles.

North American river otters living in groups hunt and travel together, use the same dens, resting sites, and latrines, and perform allogrooming. In freshwater systems, groups occur most often in autumn and during early winter. From mid-winter through the breeding season, adult females move and den alone. River otters are not territorial, but individual North American river otters of different groups portray mutual avoidance. Home ranges of males are larger than those of females, and both sexes exhibit intra- and intersexual overlap of their domains.

North American river otters can produce a snarling growl or hissing bark when bothered, and a shrill whistle when in pain. When at play or traveling, they sometimes give off low, purring grunts. The alarm call, given when shocked or distressed by potential danger, is an explosive snort, made by expelling air through the nostrils. North American river otters also may use a birdlike chirp for communication over longer distances, but the most common sound heard among a group of otters is low-frequency chuckling.

North American river otters are polygynous. Females usually do not reproduce until two years of age, although yearlings produce offspring on occasion. Males are sexually mature at two years of age.

Female estrus lasts about a month per year, and true gestation lasts 61–63 days. Because the North American river otters delay implantation for at least eight months, the interval between copulation and parturition can reach 10–12 months. Delayed implantation distinguishes the species from the European otter, which lacks this feature.

Young are born between February and April, and parturition lasts three to eight hours.

In early spring, expectant mothers begin to look for a den where they can give birth.

The female otters do not dig their own dens; instead, they rely on other animals, such as beavers, to provide suitable environments to raise their offspring. When the mothers have established their domains, they give birth to several kits.

Litter size can reach five, but usually ranges from one to three. Each otter pup weighs approximately five ounces. At birth, the North American river otters are fully furred, blind, and toothless. The claws are well-formed and facial vibrissae (about 5 mm (0.20 in) long) are present. The kits open their eyes after 30–38 days. The newborns start playing at five to six weeks, and begin consuming solid food at 9–10 weeks. Weaning occurs at 12 weeks, and females provide solid food for their progeny until 37–38 weeks have transpired. The maximum weight and length of both sexes are attained at three to four years of age.

The mothers raise their young without aid from adult males. When the pups are about two months old and their coats grow in, their mother introduces them to the water. North American river otters are natural swimmers and, with parental supervision, they acquire the skills necessary to swim. 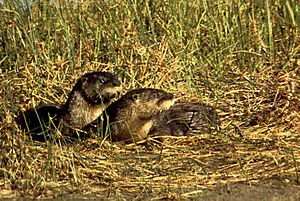 The species inhabits coastal areas, such as marshland. 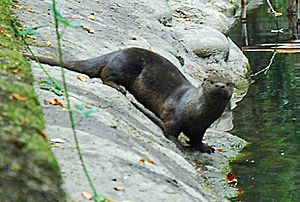 A North American river otter in the San Anselmo Creek. 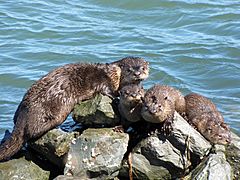 Although commonly called a "river otter", the North American river otter is found in a wide variety of aquatic habitats, both freshwater and coastal marine, including lakes, rivers, inland wetlands, coastal shorelines, marshes, and estuaries. It can tolerate a great range of temperature and elevations. A North American river otter's main requirements are a steady food supply and easy access to a body of water. However, it is sensitive to pollution, and will disappear from tainted areas.

Like other otters, the North American river otter lives in a holt, or den, constructed in the burrows of other animals, or in natural hollows, such as under a log or in river banks. An entrance, which may be under water or above ground, leads to a nest chamber lined with leaves, grass, moss, bark, and hair. Den sites include burrows dug by woodchucks (Marmota monax), red foxes (Vulpes vulpes), nutria (Myocastor coypus), or beaver and muskrat lodges. North American river otters also may use hollow trees or logs, undercut banks, rock formations, backwater sloughs, and flood debris. The use of den and resting sites is chiefly opportunistic, although locations that provide protection and seclusion are preferred.

All content from Kiddle encyclopedia articles (including the article images and facts) can be freely used under Attribution-ShareAlike license, unless stated otherwise. Cite this article:
North American river otter Facts for Kids. Kiddle Encyclopedia.