Aurora, a suburb of Chicago, is a city predominantly in Kane County and DuPage County, with portions extending into Kendall and Will counties. It is located in the outer region of Greater Chicago in the U.S. state of Illinois. It is the second most populous city in the state, and the 114th most populous city in the country. The population was 197,899 at the 2010 census, and was estimated to have increased to 199,963 by July 2013.

Once a mid-sized manufacturing city, Aurora has grown tremendously since the 1960s. Founded within Kane County, Aurora's city limits and population have since expanded into DuPage, Will, and Kendall counties. Between 2000 and 2003, the U.S. Census Bureau ranked Aurora as the 34th fastest growing city in the United States. From 2000 to 2009, the U.S. Census Bureau ranked the city as the 46th fastest growing city with a population of over 100,000.

In 1908, Aurora officially adopted the nickname "City of Lights," because it was one of the first cities in the United States to implement an all-electric street lighting system in 1881. Aurora's historic downtown is located on the Fox River, and centered on Stolp Island. The city is divided into three regions, The West Side, located on the west side of the Fox River, The East Side, located between the eastern bank of the Fox River and the Kane/DuPage County line, and the Far East Side/Fox Valley, which is from the County Line to the city's eastern border with Naperville.

The Aurora area is home to an impressive collection of architecture, including structures by Frank Lloyd Wright, Ludwig Mies van der Rohe, Bruce Goff and George Grant Elmslie. The Hollywood Casino Aurora, a dockside gaming facility with 53,000 square feet (4,900 m2) and 1,200 gaming positions, is located on the river in downtown Aurora. Aurora is also home to a large collection of Sears Catalog Homes (over 50 homes) and Lustron all-steel homes (seven homes).

Before European settlers arrived, there was a Native American village in what is today downtown Aurora, on the banks of the Fox River. In 1834, following the Black Hawk War, the McCarty brothers arrived and initially owned land on both sides of the river, but sold their lands to the Lake Brothers on the west side. The Lake Brothers opened a mill on the opposite side of the river. The McCartys lived and operated their mill on the east side. A post office was established in 1837, officially creating Aurora. Actually, however, Aurora was originally two villages: East Aurora, incorporated in 1845, on the east side of the river, and West Aurora, formally organized on the west side of the river in 1854. In 1857, the two towns joined officially, incorporated as the city of Aurora. The two sides could not agree on which side of the river should house the public buildings, so most public buildings were built on or around Stolp Island in the middle of the Fox River.

As the city grew, many factories and jobs came to Aurora, along with many people. In 1856, the Chicago, Burlington and Quincy Railroad located its roundhouse and locomotive shop in Aurora to become the town's largest employer until the 1960s. Many of the heavy industries were located on the East side which provided employment for many generations of European immigrants. Many immigrants flocked to the city, mainly from Great Britain, Ireland, Scandinavia, Luxembourg, Germany, France, and Italy. Aurora became the main economic center of the Fox Valley region. The combination of these three factors—a highly industrialized town, a sizable river that divided it, and the Burlington's shops—accounted for much of the dynamics of Aurora's political, economic, and social history. The city was inclusive and tolerant, and welcomed a variety of immigrants and openly supported abolitionism prior to the American Civil War. Mexican migrants began arriving after the Mexican Revolution of 1910. Socially, the town was progressive in its attitude toward education, religion, welfare, and women. The first free public school district in Illinois was established in 1851 and a high school for girls came four years later.

The city was a manufacturing powerhouse until the early 1970s, when the railroad shops closed. Soon many other factories and industrial areas relocated or went out of business. By 1980, there were few industrial areas operating in the city, and unemployment soared to 16%. During the late 1970s and early 1980s, development of the Far East side along the Eola Road and Route 59 areas began. While this was financially beneficial to the city, it also contributed to the decline of the downtown and the manufacturing sectors on the near East and West Sides. Crime rates soared and street gangs started to form in the mid-1980s. It was during this time that Aurora became a much more culturally diverse city. The Latino population started to grow rapidly in the city in the 1980s. In the late 1980s, several business and industrial parks were established on the outskirts of the city. In 1993, the Hollywood Casino was built downtown, which helped bring the first redevelopment to the downtown area in nearly twenty years. In the late 1990s, more development began in the rural areas and towns outside of Aurora. Subdivisions sprouted up all around the city, and Aurora's population soared.

Today, Aurora is a culturally diverse city of around 200,000 residents. Historic areas downtown are being redeveloped, and new developments are being built all over the city. 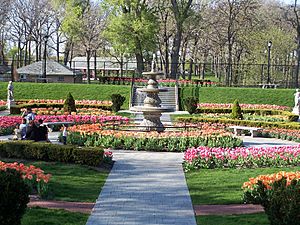 While the city has traditionally been regarded as being in Kane County, Aurora's city limits also include parts of DuPage, Kendall and Will counties. Aurora is one of only three cities in Illinois spanning four counties. (The other cities are Barrington Hills and Centralia.)

On July 17–18, 1996, a major flood struck Aurora, with 16.9 inches (430 mm) of rain in a 24-hour period, which is an Illinois state record, and the second highest ever nationally. Flooding occurred in almost every low-lying area in the city, and in neighborhoods bordering the Fox River, causing major damage in some neighborhoods. The flooding was just as bad in Blackberry Creek, on Aurora's far west side.

Aurora has not been struck by any major tornadoes in recent history, although they occur in Northern Illinois annually. In 1906, a tornado went through the Aurora Driving Park, a large recreation/amusement park and race track located where the Riddle Highlands neighborhood and Northgate shopping center is now located. The tornado hit during the afternoon performance of the Ringling Brothers "Greatest Show on Earth" circus, when the park was crowded. It killed 2 people and injured 22, but the grandstand was still filled for the evening performance. Weak Tornadoes struck the city in 1954, 1958, 1960, and 1991. In 1990, the supercell thunderstorm that produced the deadly Plainfield Tornado passed over the city, dropping golf ball sized hail and causing wind damage. Less than ten minutes after passing through Aurora, the storm produced an F5 tornado, which touched down in nearby Oswego, less than 5 miles from downtown. The tornado then traveled through Plainfield and Joliet, killing 29 people.

The city can receive heavy snowfall and experiences blizzards periodically.

There were 46,489 households out of which 44.2% had children under the age of 18 living with them, 56.5% were married couples living together, 12.0% had a female householder with no husband present, and 26.4% were non-families. 20.6% of all households were made up of individuals and 5.3% had someone living alone who was 65 years of age or older. The average household size was 3.04 and the average family size was 3.55. 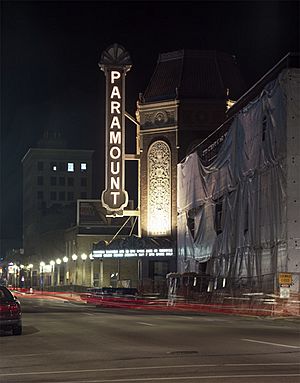 Downtown Aurora is home to the Paramount Theatre, a large live performance theater on the National Register of Historic Places, and the Hollywood Casino. There is also the Leland Tower, a former hotel which was the tallest building in Illinois outside the Chicago city limits and is on the National Register of Historic Places. The largest collection of commercial buildings by Prairie School architect George Grant Elmslie is located here. Also located downtown is the main building of Aurora Public Library and a branch campus of Waubonsee Community College.

Downtown Alive, a festival that includes live music and a variety of food booths, is held on three weekends (Friday and Saturday night) in the summer; Blues on the Fox (featuring national blues artists) is held on the Friday and Saturday of Father's Day weekend. Roughly 8,000–13,000 people attend. The quarterly AuroraArtWalk is hosted by the Cultural Creatives—a grassroots team of local artist, property owners, patrons and the City of Aurora. The Riverfront Playhouse is a not-for-profit theater that has held a storefront location in downtown Aurora since 1978.

A fixture of Downtown Aurora, the Waubonsee Community College Campus, which formerly sat on Stolp Island near the Paramount Theatre, has recently been closed, as a new and greatly expanded campus was built on the Western banks of the river, between the river and IL Route 31. The construction of the campus was part of a larger plan to redevelop the Downtown area, putting in parks and new walking paths, making the area more inviting. The plan also included a pedestrian bridge, which would connect the one banks of the river. Also in the works is a plan to modify or reconstruct the bridges onto Stolp Island, which have not been maintained for close to 60 years.

Aurora has a rich history of entertainment. There were several theaters in the downtown area and several large community parks with baseball stadiums, circus acts, and race tracks. Some of the more popular were:

All content from Kiddle encyclopedia articles (including the article images and facts) can be freely used under Attribution-ShareAlike license, unless stated otherwise. Cite this article:
Aurora, Illinois Facts for Kids. Kiddle Encyclopedia.