Naperville is a city in DuPage and Will counties in the U.S. state of Illinois, and a suburb of Chicago. Naperville was voted the second-best place to live in the United States by Money magazine in 2006. It was rated 1st on the list of best cities for early retirement in 2013 by Kiplinger. In a 2010 study, Naperville was named the wealthiest city in the Midwest and eleventh in the nation with a population over 75,000. It was ranked among the nation's safest cities by USAToday and Business Insider. As of the 2010 census, the city had a population of 141,853, which was estimated to have increased to 147,100 by July 2015. It is the fifth-largest city in Illinois. 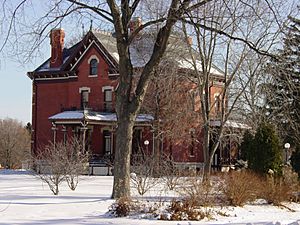 The Martin-Mitchell Mansion, within the Naper Settlement outdoor museum, is listed on the National Register of Historic Places

In July 1831, Joseph Naper arrived at the west bank of the DuPage River with his family and friends to found what would be known as Naper's Settlement. Among those original settlers were Naper's wife Almeda Landon, his brother John with wife Betsy Goff, his sister Amy with husband John Murray, and his mother Sarah. Their arrival followed a nearly two-month voyage across three Great Lakes in the Naper brothers' schooner, the Telegraph. Also on the journey were several families who remained in the settlement that would become Chicago, including that of Dexter Graves who is memorialized in Graceland Cemetery by the well-known Lorado Taft statue "Eternal Silence" (also known as "the Dexter Graves Monument").

By 1832, over one hundred settlers had arrived at Naper's Settlement. Following the news of the Indian Creek massacre during the Black Hawk War, these settlers were temporarily displaced to Fort Dearborn for protection from an anticipated attack by the Sauk tribe. Fort Payne was built at Naper's Settlement, the settlers returned and the attack never materialized. The Pre-Emption House was constructed in 1834, as the Settlement became a stage-coach stop on the road from Chicago to Galena. Reconstructions of Fort Payne and the Pre-Emption House stand as part of Naper Settlement outdoor museum village, which was established by the Naperville Heritage Society and the Naperville Park District in 1969 to preserve some of the community's oldest buildings.

In 1855 Sybil Dunbar came to Naperville as its first recorded black female resident; she died in 1868 and was buried in Naperville Cemetery on Washington Street. A commemorative marker honoring her was placed in the cemetery in 2015.

After DuPage County was split from Cook County in 1839, Naper's Settlement became the DuPage county seat, a distinction it held until 1868. Naper's Settlement was incorporated as the Village of Naperville in 1857, at which time it had a population of 2,000. Reincorporation as a city occurred in 1890.

On April 26, 1946, Naperville was the site of one of the worst train disasters in Chicago history. Two Chicago, Burlington and Quincy Railroad trains, the Advance Flyer and the Exposition Flyer, collided 'head to tail' on a single track just west of the Loomis Street grade crossing. The accident killed 45 and injured approximately 127 passengers and/or crew members. This event is commemorated in a metal inlay map of Naperville on the southeast corner of the Nichols Library's sidewalk area. In 2012, author Chuck Spinner published The Tragedy at the Loomis Street Crossing which details the tragedy and gives the stories of the 45 persons who perished. On April 26, 2014, a memorial entitled Tragedy to Triumph was dedicated at the train station. The sculpture by Paul Kuhn is dedicated not only to the crash victims but also to the rescuers at the site.

A predominantly rural community for most of its existence, Naperville experienced a population explosion beginning in the 1960s and continuing into the 1980s and 1990s, following the construction of the East-West Tollway (now known as the Ronald Reagan Memorial Tollway) and Interstate 355 (originally known as the North-South Tollway, now the Veterans Memorial Tollway). It has nearly quadrupled in size as the Chicago metropolitan area's urban sprawl brought corporations, jobs, and wealth to the area.

The March 2006 issue of Chicago magazine cites a mid-1970s decision to make and keep all parking in downtown Naperville free to keep downtown Naperville "alive" in the face of competition with Fox Valley Mall in Aurora and the subsequent sprawl of strip shopping malls. Parking meters were taken down, parking in garages built in the 1980s and 1990s is free, and parking is still available on major thoroughfares during non-peak hours.

Naperville marked the 175th anniversary of its 1831 founding in 2006. The anniversary events included celebrations, concerts and a balloon parade.

According to the 2010 census, Naperville has an area of 39.323 square miles (101.85 km2), of which 38.77 square miles (100.41 km2) (or 98.59%) is land and 0.553 square miles (1.43 km2) (or 1.41%) is water. Portions of the city of Naperville drain to the West Branch of the DuPage River within DuPage County. Specifically, in the flood of 1996, downtown businesses in the City of Naperville incurred significant damage. Overall, however, Forest Preserve District ownership of a large amount of property along the West Branch has minimized development in flood plains and has helped reduce the damages from overbank flooding that have occurred in the county's more developed watersheds.

There were 48,655 households out of which 45.3% had children under the age of 18 living with them, 70.0% were married couples living together, 6.2% had a female householder with no husband present, and 23.7% were non-families. 17.8% of all households were made up of individuals and 3.9% had someone living alone who was 65 years of age or older. The average household size was 3.04 and the average family size was 3.55.

In 2011, 14.9% of Naperville's residents were Asian, making it the Chicago suburb with the tenth highest percentage of Asians. 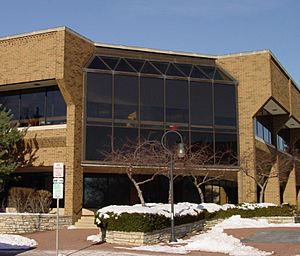 The Naperville Public Library has been ranked number one in the United States each year from 1999 through 2010, for cities with populations between 100,000 and 249,999 by Hennen's American Public Library Ratings.

There are three public library locations within the city limits:

In May 2005, a local technology company was contracted to install fingerprint scanners as a more convenient access method to the libraries internet computers, provoking some controversy. After further testing, the technology was not implemented.

The three libraries are used heavily by the public, including around one and a half million visitors and a circulation of about five million items yearly.

Naperville is home of the Naperville Independent Film Festival, an annual film festival which features the work of independent filmmakers.

The Naperville Historic District is a set of 613 buildings in the older eastern section of Naperville and is listed on the National Register of Historic Places.

In 1999, Naperville was designated a White House Millennium Community, due to the construction of the Moser Tower and Millennium Carillon. The tower is a bell tower just north of Aurora Avenue and at the base of Rotary Hill within the Riverwalk Park complex. The Carillon is designated as a Grand Carillon, with 72 bells, and is one of only four in the world that span six octaves. It was dedicated in an Independence Day event on June 29, 2000, with a reception attended by over 15,000, and a performance by the Naperville Municipal Band and the Naperville Men's Glee Club and Festival Chorus. The Carillon is both manually and also computer-playable, with most performances done by hand, but with half the bells played by a computer-controlled system at set times during the day. At present, the Carillon is operational and tours are available after concerts. Disputes over funding the completion of the tower were debated before the Naperville City Council during the fall of 2005 (and are still not resolved). The tower's design won an award for "Best Custom Solution" from the Precast/Prestressed Concrete Institute (PCI). 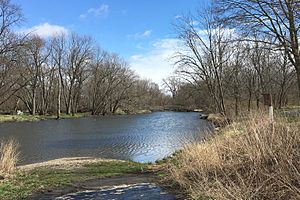 All content from Kiddle encyclopedia articles (including the article images and facts) can be freely used under Attribution-ShareAlike license, unless stated otherwise. Cite this article:
Naperville, Illinois Facts for Kids. Kiddle Encyclopedia.