Nokia Corporation is a Finnish telecommunications company with its main office in Espoo, a suburb of Helsinki.

The company began in 1865 as a wood pulp mill in Finland and began making paper. The paper was sold to Russia, the United Kingdom, and France. The company merged with the Finnish Rubber Company which wanted to use its hydroelectricity plant. After World War Two, Nokia bought a large part of the Finnish Cable Works. In 1967 the three companies joined to form the Nokia Group.

They began making electronic products, and for a few years early in the 21st century were the world's biggest maker of mobile phones. Some of its phones, such as the Nokia 1100 and 1110, have sold over 250 million units around the world, and a few others, like the Nokia 3210 and Nokia 3310, sold more than 100 million units.

The Nokia 1100 is the phone which sold the most units around the world of all-time.

In 2011, Nokia and Microsoft began a partnership which created Nokia Lumia, a series of smartphones that use the Windows Phone operating system and was meant to replace Symbian as the OS on Nokia's smartphones. Not many of these phones were sold and because of this, Nokia was losing money. Finally, in 2013, Microsoft bought out Nokia's mobile phone business, which became a division of Microsoft called Microsoft Mobile. Microsoft continued to make feature phones with the Nokia brand, but began using the Microsoft brand for its Lumia smartphones. Nokia's other phones, including the Nokia X which used Android, were discontinued, or no longer made.

Nokia also bought the mapping company Navteq in 2011, and changed its name to HERE. Its apps were first available only on Windows Phone as part of the company's deal with Microsoft, but they later became available for Android and iOS. HERE was sold to Volkswagen, BMW, and Daimler in 2015.

Also in 2011, Nokia started a music streaming service called MixRadio. It became part of Microsoft Mobile in 2014, was sold to a Japanese company in 2015, and was eventually shut down in 2016.

In 2013, Nokia bought out the share of its telecommunications division that was held by Siemens of Germany, and this division is now known as Nokia Networks. The French company Alcatel-Lucent was bought by Nokia and merged into Nokia Networks early in 2016, which also included taking over the famous Bell Labs. 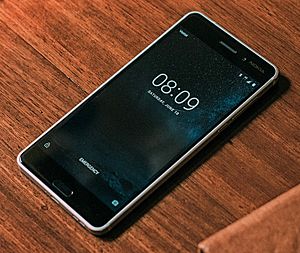 On 18 May 2016, Microsoft Mobile sold its Nokia-branded feature phone business to HMD Global, a new company founded by former Nokia executive Jean-Francois Baril, and an associated factory in Vietnam to Foxconn's FIH Mobile subsidiary. Nokia subsequently entered into a long-term licensing deal to make HMD the exclusive manufacturer of Nokia-branded phones and tablets outside Japan, operating in conjunction with Foxconn. The deal also granted HMD the right to essential patents and featurephone software. HMD subsequently announced the Android-based Nokia 6 smartphone in January 2017. At Mobile World Congress, HMD additionally unveiled the Nokia 3 and Nokia 5 smartphones, as well as a re-imagining of Nokia's classic 3310 feature phone. While Nokia has no investment in the company, they do have some input in the new devices.

On 28 June 2016 Nokia demonstrated for the first time a 5G-ready network. In February 2017 Nokia carried out a 5G connection in Oulu, Finland using the 5GTF standard, backed by Verizon, on Intel architecture-based equipment.

On 5 July 2017, Nokia and Xiaomi announced that they have signed a business collaboration agreement and a multi-year patent agreement, including a cross license to each company's cellular standard essential patents.

In 2017, Nokia's brand value jumped 147 places to 188th place compared to 2016 in the Brand Finance ranking. Its rise was attributed to its health portfolio and new mobile phones developed by HMD Global.

On 19 January 2018, Nokia signed a deal with NTT Docomo, Japan's largest mobile operator, to provide 5G wireless radio base stations in the country by 2020.

On 29 January 2018, Nokia introduced the ReefShark line of 5G chipsets, claiming that it triples bandwidth to 84 Gbit/s. It will be released by Q3 2018. It also incorporates artificial intelligence technologies from Bell Labs.

On 7 May 2018, Nokia announced that it has acquired a California based IoT startup, SpaceTime Insight.

All content from Kiddle encyclopedia articles (including the article images and facts) can be freely used under Attribution-ShareAlike license, unless stated otherwise. Cite this article:
Nokia Facts for Kids. Kiddle Encyclopedia.