Windows Phone 7 is the first release of the Windows Phone mobile client operating system, released on November 8, 2010, worldwide was released on October 21, 2010. It run on Windows CE 6.0 kernel.

Microsoft officially unveiled the new operating system is Windows Phone 7 Series, at the Mobile World Congress in Barcelona on February 15, 2010, and revealed additional MIX 2010. The final SDK is have made avaliable on September 16, 2010. In original names and ''wordy'', the names is Windows Phone 7 shortened on April 2, 2010.

On October 11, 2010. The CEO Steve Ballmer announced the 10 launch device for Windows Phone 7, made by HTC, Samsung, Dell and LG, with sale was beginning on October 21, 2010 for Europe and Australia, the Windows Phone 7 was released on November 8, 2010 for United States.

Upon the device were made on 60 carriers in 30 countries, another device will be launched in 2011. The released Windows Phone 7 ''Mango'' in CEO Steve Ballmer used beginning on November 11, 2010. More is ZTE Microsoft website, was beginning support for Windows Phone 7. 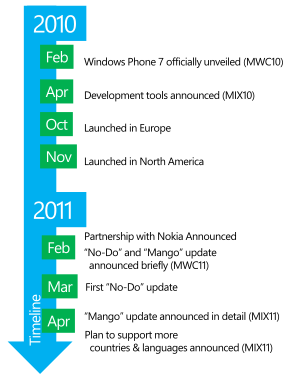 The main for Windows Phone 7 Timeline

Windows Phone 7 features a user interface based on designed system codename and commonly referred as Metro. The home screen, called ''Start screen'', is made up the ''Live Tiles'' for Windows Phone 7, Tiles are link features and functions, (such as contact and web). User can add and remove tiles, dynamic and updates in real times, it example, the tiles for an email account would display the number messange but live updates is weathers.

While Windows Phone was hiding removed Adobe Flash, which end least on December 31, 2020, which based system is Google, and Windows Live.

Windows Phone 7 device mockup by 512MB of RAM, also for ''Mango'' and Tango update, the requirements were revised to allow for chipsets with slower processors, and for devices to have a minimum of 256 MB of RAM. Certain features of the operating system, and the ability to install certain resource-intensive apps. The 512MB of RAM is the device for Tango updates, live everything new for Live Tiles in device.

Windows Phone 7.5 is the version for Windows Phone 7 was released in 2011, at the Campaign Shop in United States, the logo can smillar the red color button, Live Tiles app everything for version Mango, the first release Mango was leaked on January 2011, the support version have choose from Microsoft offcially version is Tango.

Microsoft's hardware requirements stipulate that every device running Windows Phone 7 must have a dedicated Search button on the front of the device that performs different actions. Pressing the search button while an application is open allows users to search within applications that take advantage of this feature; for example, pressing Search in the People hub lets users search their contact list for specific people. This has been changed in Windows Phone 7.5 however – as the search button is reserved for Bing – so applications that previously used this feature (such as the Marketplace) now include soft search buttons.

In other cases, pressing the Search button will allow the user to perform a search of web sites, news, and map locations using the Bing application.

Windows Phone also has a voice recognition function, powered by TellMe, which allows the user to perform a Bing search, call contacts or launch applications simply by speaking. This can be activated by pressing and holding the phone's Start button.

Bing is the default search engine on Windows Phone handsets due to its deep integration of functions into the OS (which also include the utilization of its map service for location-based searches and queries). However, Microsoft has stated that other search engine applications can be used. 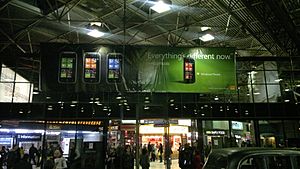 The "Music + Videos hub" allows the user to access music, videos, and podcasts stored on the device, and links directly to the "Xbox Music Store" to buy music, or rent with the Xbox Music Pass subscription service. When browsing the music by a particular artist, users are able to view artist biographies and photos, provided by the Xbox Music. This hub integrates with many other apps that provide video and music services, including, but not limited to, iHeartRadio, YouTube, and Vevo. This hub also includes Smart DJ which compiles a playlist of songs stored on the phone similar to the song or artist selected. Purchased movies and other videos can be played through Xbox Video.

The "Pictures hub" displays the user's Facebook and SkyDrive (Now OneDrive) photo albums, as well as photos taken with the phone's built-in camera. Users can also upload photos to social networks, comment on others photos, and tag photos on social networks. Multi-touch gestures permit zooming in and out of photos.

Windows Phone 7 supports WAV, MP3, WMA, AMR, AAC/MP4/M4A/M4B, and 3GP/3G2 standards. The video file formats supported include WMV, AVI, MP4/M4V, 3GP/3G2, and MOV (QuickTime) standards. These supported audio and video formats would be dependent on the codecs contained inside them. It has also been previously reported that the DivX and Xvid codecs within AVI are also playable on the system. Unlike the previous Windows Mobile operating system, there are currently no third-party applications for handling other video formats. The image file formats that are supported include JPG/JPEG, PNG, GIF, TIF and Bitmap (BMP).

After the "Mango" update, Windows Phone 7 added the ability for users to have custom ringtones. Ringtone audio files must be under 1MB and less than 40 seconds long. Custom ringtones still cannot be used for text messages, IMs or emails.

Contacts are organized via the "People hub", and can be manually entered into contacts or imported from Facebook, Windows Live Contacts, Twitter, LinkedIn and Gmail. Contacts may be manually imported from Outlook using Windows Live Contacts or Gmail. A "What's New" section show news feed and a "Pictures" section show pictures from those social networks made by the contacts. A "Me" section show the phone user's own social networks status and wall, allow the user to update his status, and check into Bing and Facebook Places. Contacts can be added to the home screen by pinning them to the start. The contact's "Live Tile" displays his social network status and profile picture on the homescreen and the contact's hub displays his Facebook wall as well as all of the rest of his contact information and information from his other social networks.

If a contact has information stored on multiple networks, users can link the two separate contact accounts, allowing the information to be viewed and accessed from a single card. As of Windows Phone 7.5, contacts can also be sorted into "Groups". Here, information from each of the contacts is combined into a single page which can be accessed directly from the Hub or pinned to the Start screen. 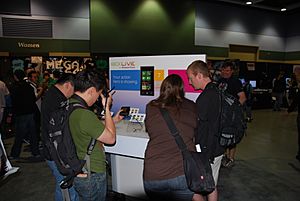 Windows Phone 7 features a user interface based on a design system codenamed and commonly referred to as Metro. The home screen, called "Start screen", is made up of "Live Tiles". Tiles are links to applications, features, functions and individual items (such as contacts, web pages, applications or media items). Users can add, rearrange, or remove tiles. Tiles are dynamic and update in real time – for example, the tile for an email account would display the number of unread messages or a tile could display a live update of the weather.

Several key features of Windows Phone 7 are organized into "hubs", which combine local and online content via Windows Phone's integration with popular social networks such as Facebook, Windows Live, and Twitter. For example, the Pictures hub shows photos captured with the device's camera and the user's Facebook photo albums, and the People hub shows contacts aggregated from multiple sources including Windows Live, Facebook, and Gmail. From the Hub, users can directly comment and 'like' on social network updates. The other built-in hubs are Xbox Music and Video, Xbox Live Games, Windows Phone Store, and Microsoft Office. Due to Facebook Connect service changes, Facebook support is disabled in all bundled apps effective June 8, 2015.

Windows Phone uses multi-touch technology. The default Windows Phone user interface has a dark theme that prolongs battery life on OLED screens as fully black pixels do not emit light. The user may choose a light theme instead, and can also choose from several accent colors. User interface elements such as tiles are shown in the user's chosen accent color. Third-party applications can be automatically themed with these colors.

What Engadget and Gizmodo felt were notable omissions in a modern smartphone OS[citation needed] have largely been addressed in the Mango update.[citation needed] ZDNet praised the OS's virtual keyboard and noted the excellent touch precision as well as powerful auto-correct and revision software. The touch responsiveness of the OS has also been universally praised by all three sites with reviewers noting the smoothness of scrolling and gestures like pinch to zoom in web browsing. PCWorld ran an article called "Windows Phone 7: Microsoft's Disaster" citing what they call a "lack of security, shockingly bad Office apps, an interface not backed up under the hood and abandonment of the full Microsoft customer base."

The reception to the "Metro" UI (also called Modern-Style UI) and overall interface of the OS has also been highly praised for its style, with ZDNet noting its originality and fresh clean look. Engadget and ZDNet applauded the integration of Facebook into the People Hub as well as other built-in capabilities, such as Windows Live, etc.

All content from Kiddle encyclopedia articles (including the article images and facts) can be freely used under Attribution-ShareAlike license, unless stated otherwise. Cite this article:
Windows Phone 7 Facts for Kids. Kiddle Encyclopedia.