DuPage County at the time of its creation in 1839

DuPage County is a county in the U.S. state of Illinois, and one of the collar counties of the Chicago metropolitan area. As of the 2010 census, the population was 916,924, making it Illinois' second-most populous county. Its county seat is Wheaton.

With a population nearing one million, DuPage County has become mostly developed and suburbanized, although some small pockets of farmland remain in the county's western part. The county has a vast socioeconomic profile; residents of Hinsdale, Naperville, and Oak Brook include some of the wealthiest people in the Midwest. In 2010, Midwest Living voted Hinsdale the Midwest's second wealthiest town, the first being Fairway, Kansas. In stark contrast, the large unincorporated area of Downers Grove Township in the southern part of the county is very blue collar, with several residents below the poverty line.

DuPage County was formed on 9 February 1839 out of Cook County. The county took its name from the DuPage River, which was, in turn, named after a French fur trapper, DuPage. The first written history to address the name, the 1882 History of DuPage County, Illinois, by Rufus Blanchard, relates:

Counties that are adjacent to DuPage include:

DuPage County's population's distribution by race and ethnicity in the 2010 census was as follows: 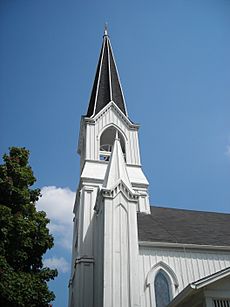 The First Church of Lombard is listed on the National Register of Historic Places.

DuPage County has several hundred Christian churches. Well-known churches include Community Christian Church of Naperville, College Church of Wheaton, Wheaton Bible Church, and First Baptist Church of Wheaton. There is also a large Catholic contingency, part of the Diocese of Joliet, and a Ukrainian Orthodox Church in Glendale Heights.

The Theosophical Society in America in Wheaton, the North American headquarters of the Theosophical Society Adyar, provides lectures and classes on theosophy, meditation, yoga, Eastern and New Age spirituality. Islamic mosques are located in Villa Park, Naperville (two mosques), Glendale Heights, Willowbrook, Westmont, Lombard, Bolingbrook, Addison, Woodale, West Chicago, and unincorporated Glen Ellyn. There are Hindu temples in Bartlett, Bensenville, Bloomingdale, Carol Stream, Itasca and Medinah, and an Arya Samaj center in West Chicago. There is a Nichiren Shōshū Zen Buddhist temple in West Chicago and a Theravada Buddhist Temple, called the Buddha-Dharma Meditation Center, in Willowbrook. There is also a Reform synagogue, Congregation Etz Chaim, in Lombard and an unaffiliated one in Naperville.

The 31-story Oakbrook Terrace Tower in Oakbrook Terrace, designed by Helmut Jahn, is the tallest building in Illinois outside of Chicago. The Elmhurst Art Museum is housed in a Mies Van Der Rohe building. There is a Frank Lloyd Wright house in Elmhurst. Bochasanwasi Shri Akshar Purushottam Swaminarayan Sanstha, a conservative Hindu sect, has built BAPS Shri Swaminarayan Mandir Chicago, a large, intricately carved, marble temple in Bartlett. There are some Sears Catalog Homes in Downers Grove and Villa Park. The Byzantine-style clubhouse of the Medinah Country Club is also an architectural highlight of the county. Lombard is home to over thirty Lustron prefabricated steel homes.

DuPage also plays host to a rich, local music scene. Some of the better-known bands to come out of the area include: The Hush Sound; Lucky Boys Confusion; Spitalfield; and The Plain White T's.

Oakbrook Terrace's Drury Lane Theatre is an important live theatre in DuPage County. The Tivoli Theatre, one of the first theaters in the United States to be equipped with sound, is still in use in Downers Grove. In addition to showing movies, the Tivoli is home to several local performing arts groups. 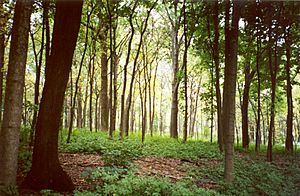 A woodland ecosystem in the Morton Arboretum

The Illinois Prairie Path, a 61-mile (98 km) rail-to-trail multi-use path, runs through Cook, DuPage and Kane Counties. It intersects with the Great Western Trail at several points, as well as the Fox River Trail at a few points.

All content from Kiddle encyclopedia articles (including the article images and facts) can be freely used under Attribution-ShareAlike license, unless stated otherwise. Cite this article:
DuPage County, Illinois Facts for Kids. Kiddle Encyclopedia.