Elmhurst is a city mostly in DuPage County and overlapping into Cook County in the U.S. state of Illinois, and a western suburb of Chicago. As of the 2010 census, the city had a total population of 44,121, which was estimated to have increased to 45,171 by July 2012. 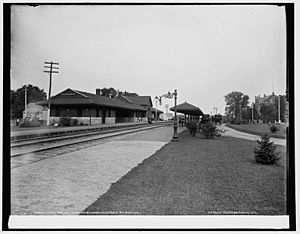 Members of the Potawatomi Native American people, who settled along Salt Creek just south of where the city would develop, are the earliest known settlers of the Elmhurst area. Around 1836, European-American immigrants settled on tracts of land along the same creek. At what would become Elmhurst City Centre, a native of Ohio named Gerry Bates established a community on a tract of "treeless land" in 1842.

The following year, Hill Cottage Tavern opened where St. Charles Road and Cottage Hill Avenue presently intersect. In 1845, the community was officially named Cottage Hill when a post office was established. Four years later the Galena and Chicago Union Railroad was given right-of-way through Cottage Hill giving farmers easier access to Chicago. The community changed its name to Elmhurst in 1869. In 1871, Elmhurst College was organized and currently has 3,500 undergraduates and about 300 graduate students. Elmhurst was incorporated as a village in 1882, with a population between 723 and 1,050, and legal boundaries of St. Charles Road to North Avenue, and one half mile west and one quarter mile east of York Street. Elmhurst Memorial Hospital was founded in 1926 as the first hospital in DuPage County.

The Memorial Parade has run every Memorial Day since 1918, and the annual Elmhurst St. Patrick's Day Parade continues to be the third largest parade of that sort in the Chicago area, following the more famous parades downtown and on the city's South Side.

Since 1964, it has been home to Elmhurst CRC, one of the largest congregations of the Christian Reformed Church in North America.

The Keebler Company's corporate headquarters was in Elmhurst until 2001, when the Kellogg Company purchased the company. The city is home to the headquarters of Sunshine Biscuits and McMaster-Carr Supply Co. Famous Amos cookies are also distributed from Elmhurst.

In 2014, Family Circle magazine ranked Elmhurst as one of the "Ten Best U.S. Towns for Families".

There were 15,627 households out of which 33.9% had children under the age of 18 living with them, 62.0% were married couples living together, 7.4% had a female householder with no husband present, and 28.1% were non-families. 24.6% of all households were made up of individuals and 11.4% had someone living alone who was 65 years of age or older. The average household size was 2.63 and the average family size was 3.19. 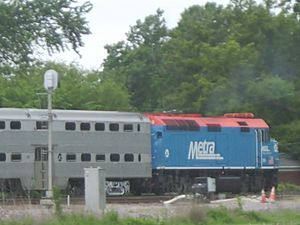 A Metra train near Elmhurst station

All content from Kiddle encyclopedia articles (including the article images and facts) can be freely used under Attribution-ShareAlike license, unless stated otherwise. Cite this article:
Elmhurst, Illinois Facts for Kids. Kiddle Encyclopedia.