Hinsdale is a village in Cook and DuPage counties in the U.S. state of Illinois. Hinsdale is a western suburb of Chicago. The population was 16,816 at the 2010 census, most of whom lived in DuPage County. The town's ZIP code is 60521. It is listed in the top 1% of wealthiest towns in Illinois, and is known locally for its beautiful residences and teardown (referring to a process in which a real estate company or individual buys an existing home and then demolishes and replaces it with a new one) culture, of which new rebuilds have taken 30% of homes in the village. The town has a rolling, wooded topography, with a quaint downtown, and is a 22-minute express train ride to downtown Chicago on the Burlington Northern line.

Hinsdale is located 20 miles (32 km) west of Chicago and is bordered by Western Springs to the east, Clarendon Hills and Westmont to the west, Oak Brook to the north, and Burr Ridge and Willowbrook to the south. It can be reached by highway from Interstate 294 or Interstate 55. The eastern boundary of Hinsdale is I-294, and the western boundary is Route 83.

The census recorded 5,488 households in the village, out of which 48.2% had children under the age of 18 living with them, 73.2% were headed by married couples living together, 6.6% had a female householder with no husband present, and 18.0% were non-families. 16.5% of all households were made up of individuals, and 8.5% were someone living alone who was 65 years of age or older. The average household size was 3.03, and the average family size was 3.43.

Hinsdale's downtown area is a National Register Historic District. The downtown area is located in the center of town and is remarkably little changed considering the many teardowns that have occurred in town. The village has restaurants, different types of shops, and various services, as well as the train station.

Another significant architectural landmark is the R. Harold Zook Home and Studio, which was originally located at 327 S. Oak Street and was saved from demolition in 2005 by relocation to the Katherine Legge Memorial Park, 5941 S. County Line Road.

To address Hinsdale's legacy of important architectural landmarks, the Hinsdale Historical Society runs the Roger & Ruth Anderson Architecture Center, which advocates for the preservation of Hinsdale's historical architecture and serves as an archive and resource. 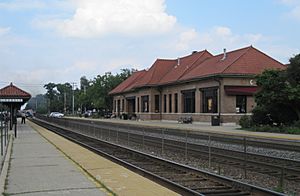 The Hinsdale train station on the BNSF Railway Line

The Katherine Legge Memorial Park and Lodge, located on 52 acres (21 ha) of woodland, was donated to the Village of Hinsdale in 1973. The lodge, built in 1927, may be rented for private and corporate events such as banquets, meetings, parties, picnics, receptions, and weddings. The park has a clubhouse with meeting rooms, a football/soccer field, a picnic area, playground apparatus, a scenic open space, a shelter, a frisbee golf course, a sledding hill, and four platform tennis courts.

All content from Kiddle encyclopedia articles (including the article images and facts) can be freely used under Attribution-ShareAlike license, unless stated otherwise. Cite this article:
Hinsdale, Illinois Facts for Kids. Kiddle Encyclopedia.