Kids Encyclopedia Facts
Not to be confused with Oakbrook Terrace, Illinois. For other uses, see Oakbrook (disambiguation). 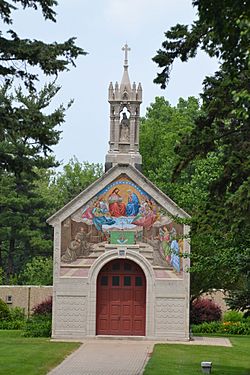 On the grounds of the Mayslake Peabody Estate in Oak Brook

Oak Brook is an affluent village in DuPage County with a small portion in Cook County in Illinois. The population was 7,883 at the 2010 census. A suburb of Chicago, Oak Brook serves as home to the headquarters of several notable companies and organizations including McDonald's (now moving to Chicago), Ace Hardware, Blistex, Federal Signal, CenterPoint Properties, Sanford L.P., TreeHouse Foods, and Lions Clubs International.

Oak Brook was incorporated as a village in 1958, due in large part to the efforts of Paul Butler, a prominent civic leader and landowner whose father had first moved to the vicinity in 1898 and opened a dairy farm shortly thereafter. Prior to incorporation, the name Oak Brook was used by local residents to distinguish their community from neighboring Hinsdale and Elmhurst, going back to the founding of the Oak Brook Civic Association almost two decades earlier.

The original boundaries were smaller than the present extent of the village, but a considerable amount of land was annexed soon after the founding of the village, including the land that is now the site of the Oakbrook Center shopping mall, which opened in 1962.

Paul Butler's interest in sport was reflected in the Oak Brook Sports Core, which features polo fields, a golf course (which was at one time the venue for the Western Open), swimming and tennis facilities, and other recreational facilities not commonly found in a village of this size.

The Oak Brook Historical Society was established in 1975 to serve as a community advocate for the historic preservation of the village and to be a resource for research and preservation of its history. Their current goal is to restore the Old Butler School, which will serve the community as the Oak Brook Heritage Center, operated by the Oak Brook Historical Society. The Heritage Center will provide multigenerational programming, exhibits of the heritage and history of Oak Brook, a research library, and small group meeting space.

Oak Brook is located about 19 miles (31 km) west of the Chicago Loop (downtown Chicago) and is served by a network of major federal, state, and county roads, including the Tri-State Tollway (Interstate 294), the Ronald Reagan Memorial Tollway (Interstate 88), and the Eisenhower Expressway (Interstate 290). Although Oak Brook is not directly served by any CTA or Metra trains, the commercial corridor along 22nd Street is served by several Pace bus routes, and train stations in neighboring villages offer commuter train access to downtown Chicago.

Most of Oak Brook consists of residential subdivisions, with the exception of the Oakbrook Center shopping mall and other retail and office properties along 22nd Street and the Interstate 88 corridor in the northern part of the village.

The village's adjacent neighbors are Elmhurst to the north, Hillside to the northeast, Westchester to the east, Hinsdale and Westmont to the south, Downers Grove to the southwest, and Lombard and Oakbrook Terrace to the northwest.

There were 2,939 households, out of which 24.2% had children under the age of 18 living with them, 73.6% were headed by married couples living together, 4.7% had a female householder with no husband present, and 19.6% were non-families. 18.2% of all households were made up of individuals, and 12.7% were someone living alone who was 65 years of age or older. The average household size was 2.63, and the average family size was 2.99.

In 2011, 23.2% of Oak Brook's residents were Asian, making it the Chicago suburb with the second highest percentage of Asians.

All content from Kiddle encyclopedia articles (including the article images and facts) can be freely used under Attribution-ShareAlike license, unless stated otherwise. Cite this article:
Oak Brook, Illinois Facts for Kids. Kiddle Encyclopedia.