The Chicago metropolitan area has one of the world's largest and most diversified economies, with more than six million full and part-time employees, and generating an annual gross regional product (GRP) of $689 billion in 2018. The region is home to more than 400 major corporate headquarters, including 31 in the Fortune 500. For six consecutive years, Chicagoland was ranked the nation's top metropolitan area for corporate relocations. The Chicago area is home to a number of the nation's leading research universities including the University of Chicago, Northwestern University, University of Illinois at Chicago, DePaul University, and Loyola University.

There are several definitions of the area, including the areas defined by the United States Office of Management and Budget (OMB) as the Chicago–Naperville–Elgin IL–IN–WI Metropolitan Statistical Area (MSA) and the slightly larger Combined Statistical Area, and the area under the jurisdiction of the Chicago Metropolitan Agency for Planning (CMAP) (an Illinois metropolitan planning organization).

The Chicago Metropolitan Statistical Area (MSA) was originally designated by the United States Census Bureau in 1950. It comprised the Illinois counties of Cook, DuPage, Kane, Lake and Will, along with Lake County in Indiana. As surrounding counties saw an increase in their population densities and the number of their residents employed within Cook County, they met Census criteria to be added to the MSA. The Chicago MSA, now defined as the Chicago-Naperville-Elgin, IL-IN-WI Metropolitan Statistical Area, is the third largest MSA by population in the United States. The 2015 census estimate for the MSA was 9,427,676, a decline from 9,729,825 in the 2010 census. This loss of population has been attributed to taxes, political issues, and other factors.

A breakdown of the 2009 estimated populations of the three Metropolitan Divisions of the MSA are as follows:

The OMB also defines a slightly larger region as a Combined Statistical Area (CSA). The Chicago-Naperville, IL-IN-WI Combined Statistical Area combines the metropolitan areas of Chicago, Michigan City (in Indiana), and Kankakee (in Illinois). This area represents the extent of the labor market pool for the entire region. The CSA has a population of 9,928,312 (2014 estimate).

The Chicago urban agglomeration, according to the United Nations World Urbanization Prospects report (2011 revision), lists a population of 9,545,000. The term “urban agglomeration” refers to the population contained within the contours of a contiguous territory inhabited at urban density levels. It usually incorporates the population in a city plus that in the surrounding area. 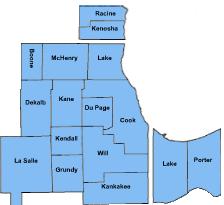 Chicagoland by county and state. 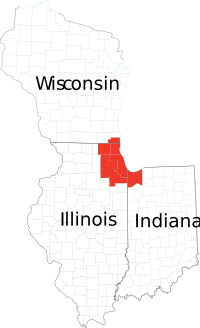 A map of Chicagoland in relation to the states of Wisconsin, Illinois, and Indiana.

Chicagoland is an informal name for the Chicago metropolitan area. The term Chicagoland has no official definition, and the region is often considered to include areas beyond the corresponding MSA, as well as portions of the greater CSA.

Colonel Robert R. McCormick, editor and publisher of the Chicago Tribune, usually gets credit for placing the term in common use. McCormick's conception of Chicagoland stretched all the way to nearby parts of four states (Indiana, Wisconsin, Michigan, and Iowa). The first usage was in the Tribune's July 27, 1926 front page headline, "Chicagoland's Shrines: A Tour of Discoveries", for an article by reporter James O'Donnell Bennett. He stated that Chicagoland comprised everything in a 200-mile (320 km) radius in every direction and reported on many different places in the area. The Tribune was the dominant newspaper in a vast area stretching to the west of the city, and that hinterland was closely tied to the metropolis by rail lines and commercial links.

Differing viewpoints exist, of course. For example, many residents who live in some of the more distant satellite counties nonetheless refer to themselves as being "from Chicago" or "Chicagoans". Until recently, DeKalb County was not considered part of the region proper, but as the highly developed area has continued to expand, it is now commonly defined as the "far suburbs" of the city.

In addition, company marketing programs such as Construction Data Company's "Chicago and Vicinity" region and the Chicago Automobile Trade Association's "Chicagoland and Northwest Indiana" advertising campaign are directed at the MSA itself, as well as LaSalle, Winnebago (Rockford), Boone, and Ogle counties in Illinois, in addition to Jasper, Newton, and La Porte counties in Indiana and Kenosha, Racine, and Walworth counties in Wisconsin, and even as far northeast as Berrien County, Michigan. The region is part of the Great Lakes Megalopolis, containing an estimated 54 million people.

Chicago Metropolitan Agency for Planning (CMAP) is an Illinois state agency responsible for transportation infrastructure, land use, and long term economic development planning for the areas under its jurisdiction within Illinois. The planning area has a population of over 8 million, which includes the following locations in Illinois:

The city of Chicago lies in the Chicago Plain, a flat and broad area characterized by little topographical relief. The few low hills are sand ridges. North of the Chicago Plain, steep bluffs and ravines run alongside Lake Michigan.

Along the southern shore of the Chicago Plain, sand dunes run alongside the lake. The tallest dunes reach up to near 200 feet (61 m) and are found in the Indiana Dunes National Lakeshore. Surrounding the low plain are bands of moraines in the south and west suburbs. These areas are higher and hillier than the Chicago Plain. A continental divide, separating the Mississippi River watershed from that of the Great Lakes and Saint Lawrence River, runs through the Chicago area.

A 2012 survey of the urban trees and forests in the seven county Illinois section of the Chicago area found that 21% of the land is covered by the tree and shrub canopy, made up of about 157,142,000 trees. The five most common tree species are buckthorn, green ash, boxelder, black cherry, and American elm. These resources perform important functions in carbon storage, water recycling, and energy saving. 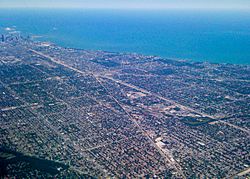 Airborne view of the dense southern part of Chicago, running alongside Lake Michigan. Downtown Chicago is at the far left by the lake in the photo.

The suburbs, surrounded by easily annexed flat ground, have been expanding at a tremendous rate since the early 1960s. Aurora, Elgin, Joliet, and Naperville are noteworthy for being four of the few boomburbs outside the Sun Belt, West Coast and Mountain States regions, and exurban Kendall County ranked as the fastest-growing county (among counties with a population greater than 10,000) in the United States between the years 2000 and 2007.

Settlement patterns in the Chicago metropolitan area tend to follow those in the city proper: the northern suburbs along the shore of Lake Michigan are comparatively affluent, while the southern suburbs (sometimes known as Chicago Southland) are less so, with lower median incomes and a lower cost of living. However, there is a major exception to this. While Chicago's West Side is the poorest section of the city, the western and northwestern suburbs contain many affluent areas. According to the 2000 Census, DuPage County had the highest median household income of any county in the Midwestern United States.

In an in-depth historical analysis, Keating (2004, 2005) examined the origins of 233 settlements that by 1900 had become suburbs or city neighborhoods of the Chicago metropolitan area. The settlements began as farm centers (41%), industrial towns (30%), residential railroad suburbs (15%), and recreational/institutional centers (13%). Although relations between the different settlement types were at times contentious, there also was cooperation in such undertakings as the construction of high schools.

As the Chicago metropolitan area has grown, more counties have been partly or totally assimilated with the taking of each decennial census.

Counties highlighted in gray were not included in the MSA for that census. The CSA totals in blue are the totals of all the counties listed above, regardless of whether they were included in the Chicago Combined Statistical Area at the time.

Urban areas within the Chicago CSA 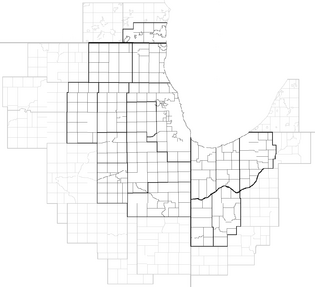 The extent of the 16-county Chicago CSA (in black) and the 16 counties that share a border with the Chicago CSA (in gray), with counties divided into Minor Civil Divisions. In Illinois and Indiana, townships are intermediate between counties and municipalities (with the latter lying within townships and crossing township borders, while in Michigan and Wisconsin, townships are municipal equivalents.

The formerly distinct urban areas of Aurora, Elgin, Joliet, and Waukegan were absorbed into the Chicago UA as of the 2000 census.

† These urban areas and urban clusters are expected to be joined to the Chicago Urban Area by the next census in 2010.

^ The Round Lake Beach-McHenry-Grayslake, IL-WI UA extends into Walworth County, WI, which lies in the Milwaukee CSA.

^^ The Michigan City-LaPorte, IN-MI UA extends into Berrien County, MI, which lies (for the moment) outside the Chicago CSA.

^^^ The Sandwich, IL UC extends into LaSalle County, IL, which lies (for the moment) outside the Chicago CSA.

^^^^ The Genoa City, WI-IL UC extends into Walworth County, WI, which lies in the Milwaukee CSA. 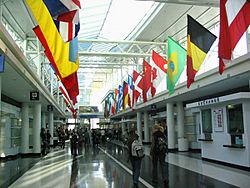 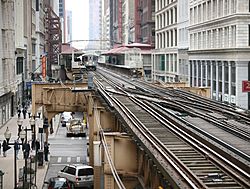 Chicago 'L' in the Loop 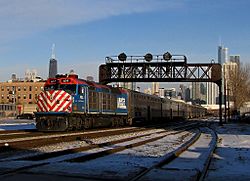 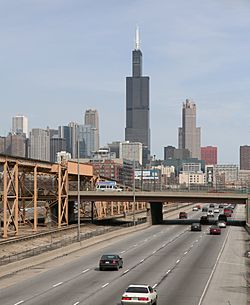 The Eisenhower Expressway with the Chicago Transit Authority Blue Line train
Main pages: Transportation in Chicago and Roads and freeways in Chicago

In addition to the Chicago Loop, the metro area is home to a few important subregional corridors of commercial activities. Among them are:

Listing of the professional sports teams in the Chicago metropolitan area

The Chicagoland Speedway oval track has hosted NASCAR Cup Series and IndyCar Series races. The Chicago Marathon is one of the World Marathon Majors. The Western Open and BMW Championship are PGA Tour tournaments that have been held primarily at golf courses near Chicago. 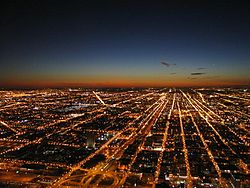 Westward view from the Willis Tower in Chicago
Main page: Economy of Chicago

See also: List of companies in the Chicago metropolitan area, Chicagoland Chamber of Commerce, and Economy of Illinois

A key piece of infrastructure for several generations was the Union Stock Yards of Chicago, which from 1865 until 1971 penned and slaughtered millions of cattle and hogs into standardized cuts of beef and pork. This prompted poet Carl Sandburg to describe Chicago as the "Hog Butcher for the World".

By the early 2000s, Illinois' economy had moved toward a dependence on high-value-added services, such as financial trading, higher education, logistics, and health care. In some cases, these services clustered around institutions that hearkened back to Illinois's earlier economies. For example, the Chicago Mercantile Exchange, a trading exchange for global derivatives, had begun its life as an agricultural futures market.

In 2007, the area ranked first among U.S. metro areas in the number of new and expanded corporate facilities. It ranked third in 2008, behind the Houston–Sugar Land–Baytown and Dallas–Fort Worth metropolitan areas, and ranked second behind the New York metropolitan area in 2009.

The Wall Street Journal summarized the Chicago area's economy in November 2006 with the comment that "Chicago has survived by repeatedly reinventing itself." 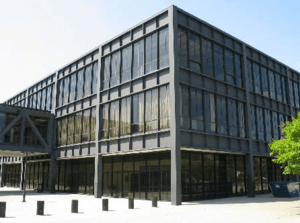 Elementary and secondary education within the Chicago metropolitan area is provided by dozens of different school districts, of which by far the largest is the Chicago Public Schools with 400,000 students. Numerous private and religious school systems are also found in the region, as well as a growing number of charter schools. Racial inequalities in education in the region remain widespread, often breaking along district boundaries; for instance, educational prospects vary widely for students in the Chicago Public Schools compared to those in some neighboring suburban schools.

Historically, the Chicago metropolitan area has been at the center of a number of national educational movements, from the free-flowing Winnetka Plan to the regimented Taylorism of the Gary Plan. In higher education, University of Chicago founder William Rainey Harper was a leading early advocate of the junior college movement; Joliet Junior College is the nation's oldest continuously-operating junior college today. Later U of C president Robert Maynard Hutchins was central to the Great Books movement, and programs of dialogic education arising from that legacy can be found today at the U of C, at Shimer College, and in the City Colleges of Chicago and Oakton Community College in the Northwest suburbs.

All content from Kiddle encyclopedia articles (including the article images and facts) can be freely used under Attribution-ShareAlike license, unless stated otherwise. Cite this article:
Chicago metropolitan area Facts for Kids. Kiddle Encyclopedia.