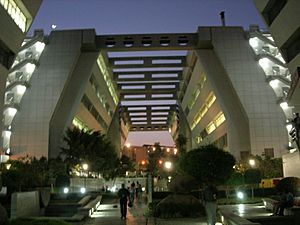 Satellite cities are smaller cities that are near to a large city that is the center of a metropolitan area. They are different from suburbs, subdivisions and bedroom communities because they have their own centre. Satellite cities could be separate cities outside of the larger metropolitan areas. However, working as part of a metropolis, a satellite city gets "cross-commuting" (people living in the city working outside of the city and people from other places working in the city).

All content from Kiddle encyclopedia articles (including the article images and facts) can be freely used under Attribution-ShareAlike license, unless stated otherwise. Cite this article:
Satellite city Facts for Kids. Kiddle Encyclopedia.