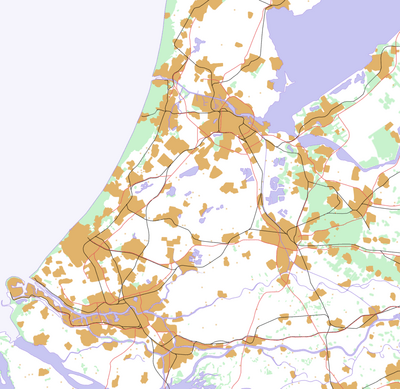 Clickable schematic map of the Randstad, a big conurbation in the Netherlands

A conurbation is an urban area comprising a number of cities, towns and villages which, through population growth and expansion, have physically merged to form one continuous built up area. It is thus a polycentric form of agglomeration. This term is commonly used in the United Kingdom.

A metropolitan area usually combines one or several conurbations with peripheral zones not themselves necessarily urban in character, but closely dependent on the conurbation(s) in terms of employment and commerce. The word conurbation is not used in the United States. The term metropolitan area is used instead.

The Randstad, which is a densely populated area in the Netherlands consisting of a cluster of the four biggest cities of the country and several smaller cities, towns and urbanized villages, is an appropriate example of a conurbation. The San Francisco Bay Area which is a cluster of cities, towns, and villages surrounding the San Francisco Bay is another example. The Brussels-Capital Region in Belgium, by contrast, is an ordinary type of agglomeration centered on one city.

All content from Kiddle encyclopedia articles (including the article images and facts) can be freely used under Attribution-ShareAlike license, unless stated otherwise. Cite this article:
Conurbation Facts for Kids. Kiddle Encyclopedia.