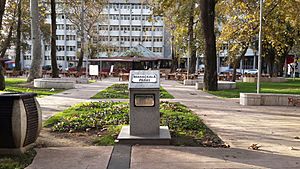 Yalova is a Turkish city in the northwest, which was affected in the earthquake of 17 August 1999. The city is along the coast of the Marmara Sea. Yalova has a better quality of life from other Turkish cities. It has a population of 77,000.

The first people settled in this region in the Prehistoric Period.

Twin cities of Yalova are Bonn in Germany and Mahachkala in Russia.

All content from Kiddle encyclopedia articles (including the article images and facts) can be freely used under Attribution-ShareAlike license, unless stated otherwise. Cite this article:
Yalova Facts for Kids. Kiddle Encyclopedia.