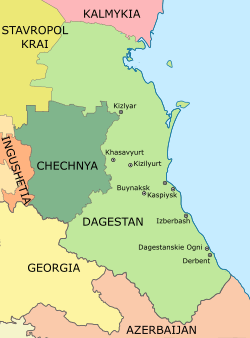 Dagestan is a federal subject of the Russian Federation in the Caucasus region. The name comes from two Persian words, dag which means mountain, and stan which means land. Dagestan has a population of nearly 3 million, and its people are known as Dagestani. Its capital city is Makhachkala.

Dagestan has the status of "republic" in Russia and has its own constitution and official languages. Republics in Russia are the home of its ethnic minorities (those who are not Russians), and usually one or two nationalities have a majority of the population in each republic. But in Dagestan, there are over 30 different nationalities (the largest of which are the Avar, Lak, Dargwa, Lezgian, and Tabasaran), and none of these form a majority. This is because the mountains in the region make it hard for people to move around. These people speak 30 different languages, but use Russian as their lingua franca to communicate between each other.

Most people of Dagestan are Muslims and belong to the Shafi`i school of Sunni Islam.

All content from Kiddle encyclopedia articles (including the article images and facts) can be freely used under Attribution-ShareAlike license, unless stated otherwise. Cite this article:
Dagestan Facts for Kids. Kiddle Encyclopedia.