Komotini is a city in the region of East Macedonia and Thrace, northeastern Greece. It is the capital of the Rhodope regional unit. It was the administrative centre of the Rhodope-Evros super-prefecture until its termination in 2010, by the Kallikratis Plan.

The city is home to the Democritus University of Thrace, founded in 1973. The presence of the Democritus University makes Komotini the home of thousands of Greek and international students and this, combined with an eclectic mix of Western and Oriental elements in the city's daily life, have made it an increasingly attractive tourist destination. The Police Academy is located 7 kilometres (4 miles) from Komotini on the road to Xanthi on extensive grounds and with modern facilities.

Built at the northern part of the plain bearing the same name, Komotini is one of the main administrative, financial and cultural centers of northeastern Greece and also a major agricultural and breeding center of the area. It is also a significant transport interchange, located 795 km NE of Athens and 281 km NE of Thessaloniki.

Komotini is home to a sizeable Turkish-speaking Muslim minority. 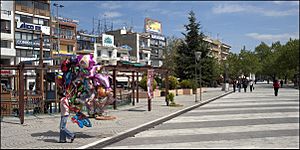 At the heart of the city lie the evergreen Municipal Central Park and the 15 m-high WW2 Heroes' Memorial, locally known as 'The Sword'. The revamped Central square (Square of Peace), is the focus of a vibrant nightlife boosted by the huge number of students living in the city. The Old commercial centre is very popular with tourists as it houses traditional shops and workshops that have long vanished from other Greek cities.

In addition, in the northwestern outskirts of the city (Nea Mosinoupoli) locals and tourists alike flock into a modern shopping plaza: Kosmopolis Park, which houses department stores, shops, supermarkets, a cinema complex, cafés and restaurants. The area stretching from Kosmopolis to Ifaistos is gradually becoming a retail destination in its own right. 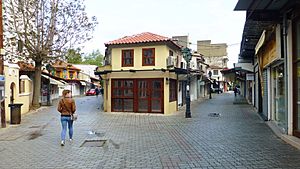 Komotini began life as a Byzantine Fortress built by the Emperor Theodosius in the 4th century AD. The ruins of this quadrangular structure can still be found NW of the central square.

Komotini has several museums including the Archaeological, Byzantine and Folklore museums. SW of the central square one can find the Open-air Municipal Theatre, which hosts many cultural shows and events.

6 kilometres (4 miles) NE of Komotini is the Nymfaia forest. It has recreational facilities which comprise trails, courts, playgrounds and space for environmental studies. The forest is divided by a paved road which leads to the ruins of yet another Byzantine fortress and the historical (WWII) fort of Nymfaia.

All content from Kiddle encyclopedia articles (including the article images and facts) can be freely used under Attribution-ShareAlike license, unless stated otherwise. Cite this article:
Komotini Facts for Kids. Kiddle Encyclopedia.