Kavala is one of the biggest cities in Macedonia. It is the capital of Kavala prefecture. It is in the northeastern part of Greece, in the East Macedonia and Thrace periphery. It is on the Bay of Kavala, across from the island of Thasos. According to the 2001 census, 63,293 people lived there. 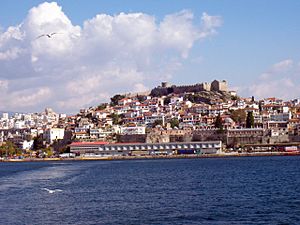 The city was founded in the late 7th century BC by settlers from Thassos. It was one of several Thassian colonies along the coastline, all founded in order to take advantage of rich gold and silver mines, especially those located in the nearby Pangaion mountain, which were eventually exploited by Phillip II of Macedonia.

Worship of Parthenos, a female deity of Greek–Ionian origin associated with Athena, is archaeologically attested in the Archaic period. At the end of the 6th century BC Neapolis claimed independence from Thassos and began issuing its own silver coins with the head of Gorgo (γοργὀνειο) on one side. A few decades later a large Ionic temple made from Thassian marble replaced the Archaic one. Parts of it can now be seen in the town's archaeological museum. 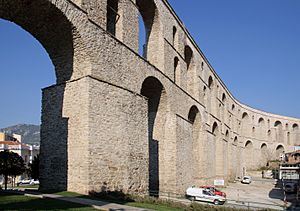 The aqueduct of Kavala, Greece. The present structure dates to the 16th century

The military Roman road Via Egnatia passed through the city and helped commerce to flourish. It became a Roman civitas in 168 BC, and was a base for Brutus and Cassius in 42 BC, before their defeat in the Battle of Philippi.

In the 6th century, Byzantine emperor Justinian I fortified the city in an effort to protect it from barbarian raids. In the 8th and 9th centuries, Bulgarian attacks forced the Byzantines to reorganise the defence of the area. Bulgarians also ruled it briefly. In 926 the Byzantine general Basil Klaudon reconstructed the town's fallen walls according to an inscription now in the archaeological museum. Thanks to its location, the city experienced an economic resurgence, securing contact between Constantinople and Thessaloniki. 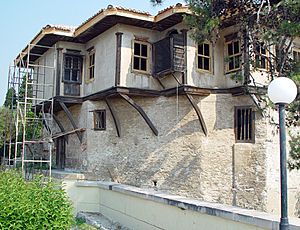 The Ottoman Turks first captured the city in 1387 and completely destroyed it in 1391. Kavala was part of the Ottoman Empire from 1387 to 1912. In the middle of the 16th century, Ibrahim Pasha, Grand Vizier of Suleiman the Magnificent, contributed to the town's prosperity and growth by the construction of an aqueduct. The Ottomans also extended the Byzantine fortress on the hill of Panagia. Both landmarks are among the most recognizable symbols of the city today.

Mehmet Ali, the founder of a dynasty that ruled Egypt, was born in Kavala in 1769. His house has been preserved as a museum. 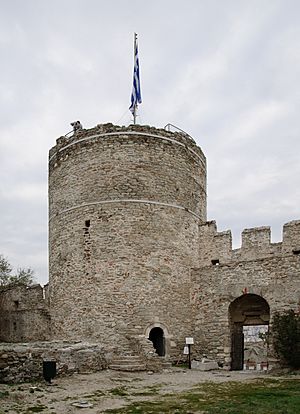 The tower of Kavala castle

In August 1916 rests of the IV Army Corps, stationed at Kavala under Ioannis Hatzopoulos surrendered to the advancing German and Bulgarian armies. These events provoked a military revolt in Thessaloniki, which led to the establishment of the Provisional Government of National Defence, and eventually Greece's entry into the First World War.

After the Greco-Turkish War of 1919–1922, the city entered a new era of prosperity because of the labour offered by the thousands of refugees that moved to the area from Asia Minor. The development was both industrial and agricultural. Kavala became greatly involved in the processing and trading of tobacco. Many buildings related to the storage and processing of tobacco from that era are preserved in the city.

During World War II and after the fall of Athens, the Nazis awarded Kavala back to Bulgarian allies in 1941, causing the city to suffer once again, but it finally was liberated in 1944. Almost the entire Jewish community of the city was exterminated during the Occupation. 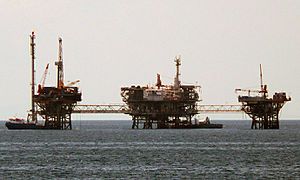 Traditionally the primary occupation of the population of Kavala was fishing. The fishermen of the town were well known all over northern Greece. After the country's industrialization, Kavala also became a center of the tobacco industry in northern Greece. The building of the Municipal Tobacco Warehouse still stands today.

Oil deposits were found outside the city in the mid-20th century and are currently exploited by an oil rig. 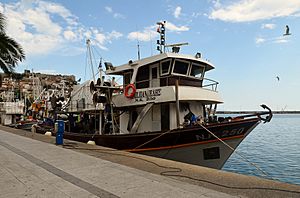 Kavala hosts a wide array of cultural events, which mostly take place during the summer months. The top festival is the Festival of Philippi which lasts from July to September and includes theatrical performances and music concerts. Since 1957, it has been the city's most important cultural event and one of the most important of Greece.

Cosmopolis is an international festival held in the Old Town of Kavala that offers an acquaintance with cultures around the world through dancing and musical groups, traditional national cuisines, cinema, and exhibits at the kiosks of participant countries. The first festival took place in 2000. Giannis Papaioannou's Festival includes concerts and music seminars. 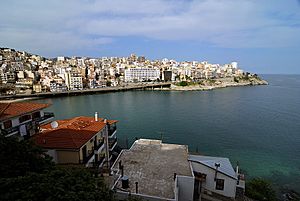 Ilios ke Petra (Sun and Stone) (July) is a festival held in "Akontisma" of Nea Karvali. The event is of folkloric character, with the participation of traditional dancing groups from all over the world.

Kavala AirSea Show is an annual air show held in late June. Various cultural events are held in all municipalities of Kavala during the summer months. 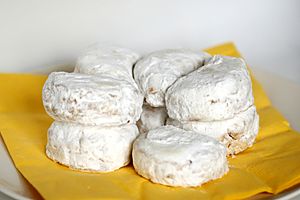 Fish and seafood, as well as the products of the local livestock breeding and agricultural sectors are the prevailing elements of Kavala cuisine. Fresh fish and seafood, salted food, mackerel "gouna" (sun dried mackerel on the grill), sardine pantremeni, mussels with rice, herring saganaki, anchovies wrapped in grape leaves, and stuffed eggplant are some very renowned recipes in Kavala and the coastal settlements of the region. The grapes and wine produced in the area, as well as the kourabiedes (sugar-coated almond biscuits) from Nea Karvali, are particularly famous.

All content from Kiddle encyclopedia articles (including the article images and facts) can be freely used under Attribution-ShareAlike license, unless stated otherwise. Cite this article:
Kavala Facts for Kids. Kiddle Encyclopedia.