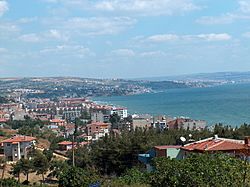 Tekirdağ is a city in Turkey. It is a part of the region historically known as Eastern Thrace. Tekirdağ is the capital of Tekirdağ Province. The city population as of 2016[update] is 176,848. There are honorary consulates of Hungary and Bulgaria in Tekirdağ.

Tekirdağ is on the northern coast of the Sea of Marmara, 135 kilometres (84 miles) west of the city of Istanbul.

All content from Kiddle encyclopedia articles (including the article images and facts) can be freely used under Attribution-ShareAlike license, unless stated otherwise. Cite this article:
Tekirdağ Facts for Kids. Kiddle Encyclopedia.