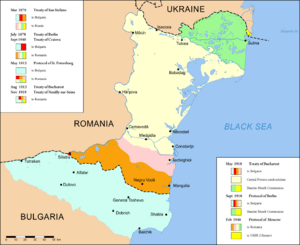 Dobruja is an area between Bulgaria and Romania. It can be found between the Danube and the Black Sea.

This historical region however, sees today, little but significant nationalistic conflict, for who, out of the coastal Balkan countries should control the western coastal lying areas of the Black Sea.

The areas of interest are seen to varying amounts of tourism amongst the Black Sea and its huge saline content, which brings in a leveled amount of income in the tourism sectors of the Dobruja region, i.e. Bulgaria, Romania and Ukraine.

All content from Kiddle encyclopedia articles (including the article images and facts) can be freely used under Attribution-ShareAlike license, unless stated otherwise. Cite this article:
Dobruja Facts for Kids. Kiddle Encyclopedia.