Asparuh of Bulgaria facts for kids 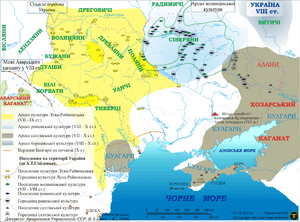 Map from Soviet book "Archeology of the Ukrainian SSR in 3 volumes", Kiev, 1986, showing place of the Asparuh's burial near the modern city of Zaporizhzhia.

Asparuh (also Ispor; Bulgarian: Аспарух or (rarely) Bulgarian: Исперих) was а ruler of Bulgars in the second half of the 7th century and is credited with the establishment of the First Bulgarian Empire in 681.

The Nominalia of the Bulgarian khans states that Asparuh belonged to the Dulo clan and reigned for 61 years. This long period cannot be accepted as accurate due to chronological constraints, and may indicate the length of Asparuh's life. According to the chronology developed by Moskov, Asparuh would have reigned 668–695. Other chronologies frequently end his reign in 700 or 701 but cannot be reconciled with the testimony of the Namelist. According to the Byzantine sources, Asparuh was a younger son of Kubrat, who had established a spacious state ("Great Bulgaria") in the steppes of modern Ukraine. Asparuh may have gained experience in politics and statesmanship during the long reign of his father, who probably died in 665 (apud Moskov). According to Djagfar Tarikhy (a work of disputed authenticity) Asparukh was made the leader of the Onogur tribe by his father. After his father's death, Asparuh would have acknowledged the rule of his older brother Bat Bayan, but the state disintegrated under Khazar attack in 668, and he and his brothers parted ways, leading their people to seek a more secure home in other lands. 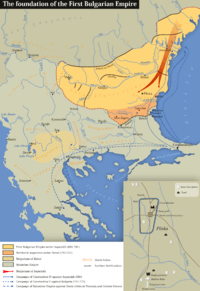 The foundation of the First Bulgarian Empire

Establishment of the First Bulgarian Empire

Asparukh was followed by 30,000 to 50,000 Bulgars. He reached the Danube and while the Byzantine capital Constantinople was besieged by Muawiyah I, Caliph of the Arabs (674–678), he and his people settled in the Danube delta, probably on the now-disappeared Peuce Island. After the Arab siege of Constantinople ended, the Byzantine Emperor Constantine IV marched against the Bulgars and their Slav allies in 680 and forced his opponents to seek shelter in a fortified encampment. Compelled to abandon the leadership of his army in order to seek medical treatment for his ailments in Anchialo (today's Pomorie), Constantine IV inadvertently demoralized his troops, who gave in to rumours that their emperor had fled. With segments of the Byzantine army starting to desert, the Bulgars and their allies broke through the blockade and routed their enemy at the Battle of Ongala in 680. Asparuh then swiftly moved from the Danubian delta down to the Balkan range.

Asparuh's victory led to the Bulgarian conquest of Moesia and the establishment of some sort of alliance between the Bulgars and the local Slavic groups (described as the Severi and Seven Slavic tribes). As Asparuh commenced to raid across the mountains into Byzantine Thrace in 681, Constantine IV decided to cut his losses and conclude a treaty, whereby the Byzantine Empire paid the Bulgars an annual tribute. These events are seen in retrospect as the establishment of the Bulgarian state and its recognition by the Byzantine Empire. In later tradition Asparukh is credited with building the major centers of Pliska and Drăstăr, as well as at least one of the Bulgarian limes walls from the Danube to the Black Sea. While the multi-tribal and hegemonic character of the Bulgarian state in the first century or two after its establishment is readily apparent, Bulgarian historians have stressed the establishment of a capital and of a state tradition that could be viewed retrospectively as national. According to a late tradition, Asparuh died fighting the Khazars on the Danube. According to one theory, advanced by the Bulgarian historian Vaklinov, his grave is located near Voznesenka ("Ascension") on the Dnieper in Ukraine.

The town of Isperikh, several villages and Asparuh Peak on Livingston Island in the South Shetland Islands, Antarctica are named after Asparuh of Bulgaria.

All content from Kiddle encyclopedia articles (including the article images and facts) can be freely used under Attribution-ShareAlike license, unless stated otherwise. Cite this article:
Asparuh of Bulgaria Facts for Kids. Kiddle Encyclopedia.