Bulgarians are a South Slavic people from southeast Europe. There are around 7.3 million Bulgarian nationals. The Bulgarians speak the Bulgarian language and most of them live in Bulgaria. There is also a large diaspora of Bulgarians in Germany, Ukraine, Spain, UK and USA.

Bulgarian Orthodoxy has been the prominent religion in Bulgaria since 870 AD. There are also a small amount of Bulgarians who converted to Islam during Ottoman rule. 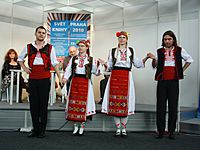 All content from Kiddle encyclopedia articles (including the article images and facts) can be freely used under Attribution-ShareAlike license, unless stated otherwise. Cite this article:
Bulgarians Facts for Kids. Kiddle Encyclopedia.