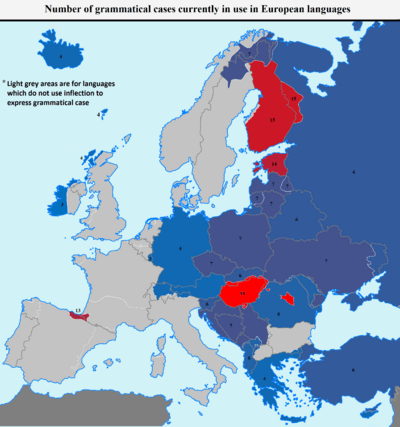 Number of inflectional grammatical cases currently in use in European languages. Light grey areas are for languages which do not inflect for grammatical case.
This page is about the grammatical concept. For the similarly named concept in orthography and typography, see Letter case.

Case is a special grammatical category of a noun, pronoun, adjective, participle or numeral whose value reflects the grammatical function performed by that word in a phrase, clause, or sentence. In some languages, nouns, pronouns, adjectives, determiners, participles, prepositions, numerals, articles and their modifiers take different inflected forms depending on what case they are in. English has largely lost its case system, although personal pronouns still have three cases which are simplified forms of nominative case, accusative case and genitive case: subjective case (I, you, he, she, it, we, they, who, whoever), objective case (me, you, him, her, it, us, them, whom, whomever) and possessive case (my, mine; your, yours; his; hers; its; our, ours; their, theirs; whose; whosever). Forms such as I, he and we are used for the subject ("I kicked the ball"), whereas forms such as me, him and us are used for the object ("John kicked me").

So, in many languages like Latin (especially), German, Russian, Spanish, Korean and Japanese, a noun's case is shown by the end of the word (the nouns change depending on their role in the sentence). Nouns change their endings to show if they are doing an action, if they are having an action done to them, if they just happen to be there during the action and whether they own something. Therefore, the word order is less important in these languages, whereas in English it is vital. 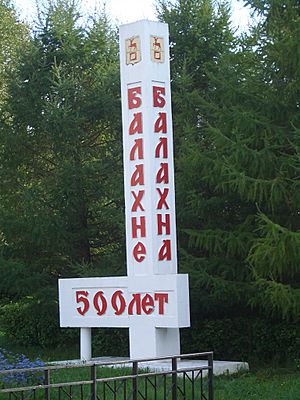 On this sign in Russian memorializing an anniversary of the city of Balakhna, the word Balakhna on the right is in the nominative case, whereas the word Balakhne is in the dative case in Balakhne 500 Let ('Balakhna is 500 years old') on the front of the sign. Furthermore, let is in the genitive (plural) case.

In English we have only the remnants of this complicated system. We use word order and add auxiliary (helping) words as needed.

"The most important grammatical development [in English] was the establishment of a fixed pattern of word-order to express the relationship between clause elements".p44

English does have these cases for nouns and pronouns: common case and genitive (possessive).p202 Each may take a plural. Examples:

All content from Kiddle encyclopedia articles (including the article images and facts) can be freely used under Attribution-ShareAlike license, unless stated otherwise. Cite this article:
Case (grammar) Facts for Kids. Kiddle Encyclopedia.