Rock Island is a city in and the county seat of Rock Island County, Illinois, United States. The original Rock Island, from which the city name is derived, is now called Arsenal Island. The population was 37,108 at the 2020 census. Located on the Mississippi River, it is one of the Quad Cities, along with neighboring Moline, East Moline, and the Iowa cities of Davenport and Bettendorf. The Quad Cities has a population of about 380,000. The city is home to Rock Island Arsenal, the largest government-owned weapons manufacturing arsenal in the US, which employs 6,000 people.

There is a wide variety of housing available in Rock Island, including historic homes, new downtown condos, new construction in the heart of the city, and wooded retreats. The Rock Island-Milan School District, Rockridge School District (southwest portion of city) along with private schools, serve the city. The District (Downtown Rock Island) has art galleries and theaters, nightclubs and coffee shops, and restaurants of all flavors. Golf courses, parks, a casino, botanical center, marina, historic tours, bike paths, and festivals offer entertainment opportunities.

This area has been a fortuitous place first for settlement and then for steamboat traffic, bridges, and railroads.

Various Native American tribes occupied this area for thousands of years before settlement. By the early nineteenth century, it was occupied chiefly by the historic Sauk tribe. Their major village of Saukenuk was located on the south side of Rock Island, along the Rock River. After the War of 1812, the United States built Fort Armstrong on the island for defensive reasons in 1816.

Saukenuk was the birthplace of the Sauk war chief Black Hawk, for whom the Black Hawk War of 1831–1832 was named. Fort Armstrong served as the US military's headquarters for the war. Today the Black Hawk State Historic Site, listed on the National Register of Historic Places, includes much of the site of the original village of Saukenuk. The park includes a museum and a number of hiking trails along the Rock River and in surrounding woods. 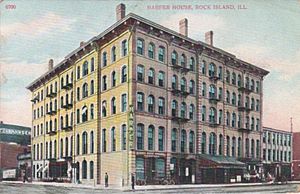 The Chicago, Rock Island & Pacific Railroad was founded here in 1851. It was informally known as the Rock Island Line. As part of later nineteenth-century development, two first-class hotels: the Harper House (opened in February 1871) and the Rock Island House were built in town. Rock Island Arsenal has manufactured military equipment and ordnance for the U.S. Army since the 1880s. The railroad was liquidated in bankruptcy in 1980.

Due to its geography, Rock Island has a rich history of bridge building, including the first railroad bridge across the Mississippi (now gone), an unusual two-track railroad bridge, and the largest roller dam in the world.

The first railroad bridge across the Mississippi River was built between Arsenal Island and Davenport in 1856. Many steamboat pilots felt that the bridge had been intentionally positioned to make it hard for them to navigate, and this conflict reflected a larger rivalry: St. Louis and its steamboats against Chicago and its railroads. Two weeks after the bridge opened, the steamboat Effie Afton collided with the bridge, caught fire, and damaged the bridge. The owner of the Effie Afton sued the bridge company for damages, and Abraham Lincoln was one of the lawyers who defended the railroad. This test case was appealed to the United States Supreme Court, which ruled in favor of the railroad in 1872. Although the original bridge is long gone, a monument exists on Arsenal Island marking the Illinois side. On the Iowa side, the bridge was located near where 4th and Federal streets intersect with River Drive. 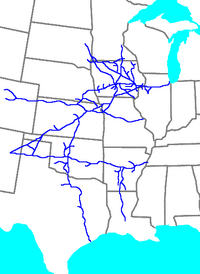 The Rock Island Line shipped goods from west of the Mississippi, across the bridge at Rock Island, east to Chicago. This map shows the railroad's extent in 1965.

Lock and Dam No. 15 and the Government Bridge are located just southwest of the site of the first bridge. The Government Bridge, completed in 1896, is notable for having two sets of railroad tracks above the car lanes. There are only two bridges in the world with this feature.

Lock and Dam No. 15, completed in 1934 as a federal Works Progress Administration (WPA) project during the Great Depression, is the largest roller dam in the world. The dam is designed for navigation, not flood control. During flood season, the rollers are raised, unleashing the full flow of the water.

On the south side of the city, overlooked by the Black Hawk State Historic Site, is a crossing of the Rock River to Milan, Illinois. This set of bridges also crosses the historic Hennepin Canal and Sears Dam (this was named after the entrepreneur David B. Sears, who previously built the Sears Dam between Arsenal Island and Moline.) In 2007 a new bridge was completed between 3rd Street Moline/southeast Rock Island and Milan. It expedites the trip to Milan, the airport, and points south on U.S. Route 67.

Note: the US Census treats Hispanic/Latino as an ethnic category. This table excludes Latinos from the racial categories and assigns them to a separate category. Hispanics/Latinos can be of any race

Construction will begin in April 2017 for a new Rock Island County courthouse. The 46,000 square foot building will have three stories that house four courtrooms, judges offices, a law library, and both the Circuit Clerk and States Attorneys offices. The $28 million project is expected to be completed in the fall of 2018. The old courthouse is expected to be torn down upon completion of the new building. 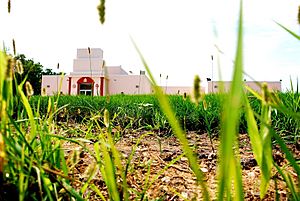 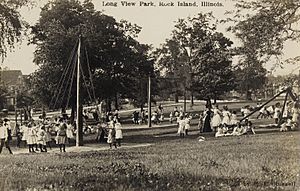 Rock Island, Illinois is the site of the Quad City Hindu Temple, a Hindu shrine dedicated chiefly to the deity Venkateswara. The temple opened in 2007. Prior to its construction, Hindu worshippers had to travel to St. Louis or Peoria to participate in Hindu festivals and worship.

According to the city's 2017 Comprehensive Annual Financial Report, the largest employers in the city are:

The first football game in what was to become the National Football League was played at Rock Island's Douglas Field in September, 1920. It was hosted by the Rock Island Independents (1907–1926), who were a charter NFL franchise in 1920.

The Rock Island Islanders were a minor league baseball team that played for 37 seasons between 1901 and 1948. The Islanders played at Douglas Park and were affiliates of the Cincinnati Reds and Philadelphia A's.

The Rock Island Legion Post 200 baseball team won the 4th State Championship in its history in 2011 in Galesburg, Illinois. Post 200 would finish 4th that year in the Great Lakes Regional.

Rock Island High School has won state championships in basketball, girls and boys track, softball, and wrestling. Additionally the football and basketball programs are perennial powerhouses. Rock Island Public Schools Stadium has an artificial surface and has a seating capacity of over 15,000.

All content from Kiddle encyclopedia articles (including the article images and facts) can be freely used under Attribution-ShareAlike license, unless stated otherwise. Cite this article:
Rock Island, Illinois Facts for Kids. Kiddle Encyclopedia.