Bettendorf is a city in Scott County, Iowa, United States. It is the 15th largest city of Iowa and the third-largest city in the "Quad Cities". It is part of the Davenport–Moline–Rock Island, IA-IL Metropolitan Statistical Area. The population was 39,102 at the 2020 U.S. Census.

Bettendorf is one of the Quad Cities, along with neighboring Davenport and the Illinois cities of Moline, East Moline and Rock Island. The Quad Cities have a population estimate of 382,630.

Bettendorf lies in the original Wisconsin Territory, which the United States bought from the Sac and Fox Indians after defeating them in the Black Hawk War. The territory was ceded in the Black Hawk Purchase of 1832. The first European-American settlers established a village they called Lillienthal, after an early tavern and dance hall. The village of Gilbert developed alongside Lillienthal in 1858, honoring Elias Gilbert, who platted the original site. At that time, the residents were predominantly German immigrants and worked as farmers, skilled laborers, and small business owners. The two villages eventually combined to become the town of Gilbert.

Circa 1900, the town gave William and Joseph Bettendorf 70 acres (280,000 m2) of riverfront land on the condition that they move their iron wagon business from Davenport to Gilbert. In 1903, the town of 440 citizens petitioned for incorporation, requesting to change the town's name in honor of the brothers whose factory was a major economic influence in the early development of the city.

In the late 1940s, Aluminum Company of America (A.L.C.O.A.) chose Riverdale, an enclave of Bettendorf, for construction of the world's largest aluminum mill. The huge mill, and the attendant developments from it, created thousands of jobs and greatly increased growth in Bettendorf's population, which has continued to the present day.

The first modern-day riverboat casinos in the United States were launched in Bettendorf on April 1, 1991 by local businessman Bernard Goldstein. He went on to found the Isle of Capri Casinos. Goldstein and his family members also operate Alter Companies, which is a scrap metal, barge and towboat company operating on the river waterfront. The Quad Cities Waterfront Convention Center opened by the casino and hotel in 2009. It is owned by the city and operated by the Isle of Capri.

Beginning in 2012, a good portion of downtown Bettendorf's buildings are being torn down to make way for the new I-74 Bridge project, expected to begin construction in 2018. 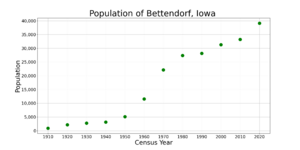 The population of Bettendorf, Iowa from US census data

For other higher education schools in the area, see Quad Cities Colleges and Universities.

The Bettendorf Community School District covers most areas of central, northern and western Bettendorf. Elementary students are assigned to one of five elementary schools: named in honor of Neil Armstrong, Herbert Hoover, Paul Norton, Mark Twain and Grant Wood. The district also has a middle and high school. The Neil Armstrong School is the only one in the district to operate on a "balanced calendar" of year-round, full-time use. A seven-member board of education represents district residents. 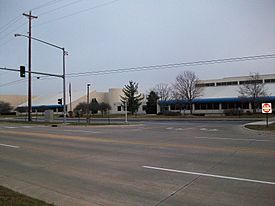 Pleasant Valley High School
is in nearby Riverdale and serves Bettendorf.

The Pleasant Valley Community School District encompasses areas of eastern Bettendorf, as well as the outlying communities of Pleasant Valley, Riverdale and LeClaire. Located inside the city limits are four of the district's six elementary schools (Pleasant View, Riverdale Heights, Hopewell and Forest Grove), while Pleasant Valley High School and the administrative center are in nearby Riverdale. Junior high students attend Pleasant Valley Junior High School, on the outskirts of LeClaire, while LeClaire elementary students go to either Cody or Bridgeview Elementary Schools. Board members are elected from seven director districts, five within Bettendorf's city limits and two others serving LeClaire-area residents. The high school has 1,232 students, the junior high 501 students, and the four combined elementary schools 1,821 students. The total district has 3,454 students.

Both high schools are part of the Mississippi Athletic Conference for sports.

All content from Kiddle encyclopedia articles (including the article images and facts) can be freely used under Attribution-ShareAlike license, unless stated otherwise. Cite this article:
Bettendorf, Iowa Facts for Kids. Kiddle Encyclopedia.