I-74 Bridge facts for kids

The Interstate 74 Bridge, officially known as the Iowa-Illinois Memorial Bridge, and often called The Twin Bridges, or the I-74 Bridge, is a pair of suspension bridges that carry Interstate 74 across the Mississippi River and connect Bettendorf, Iowa and Moline, Illinois. It is located near the geographic center of the Quad Cities.

The bridge was designed by engineer Ralph Modjeski. The first span opened in 1935 as a toll bridge. In 1961, an identical twin span, built from the same blueprint, opened to facilitate increased traffic demands. Tolls were discontinued in 1970. The twin spans were merged with Interstate 74 in 1975. 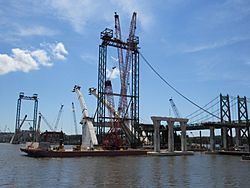 Construction of the new span in 2019. 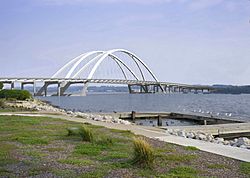 Artist rendering of the new bridge.

The I-74 Corridor Study was completed to study replacing the bridge with a larger one with 4 lanes in each direction. The study claimed that the I-74 Bridge project would spur economic growth, create construction jobs, reduce traffic backups, and improve air quality.

Funding for the construction of the new bridge has been earmarked for $22 million in 2017 and $50 million in 2018. Former Illinois Governor Pat Quinn said the state is committed to bridge improvements to help traffic flow and "boost economic growth in the region".

As of 2012, the Illinois Department of Transportation also budgeted more than $34 million for engineering, design and land acquisition for the new bridge. The conceptual design of the arch bridge was completed by CH2M Hill and Boston-based bridge designer Miguel Rosales from Rosales + Partners. Final design was completed by Modjeski and Masters in association with Alfred Benesch & Company. The portion of the bridge spanning the Mississippi River is estimated at more than $700 million, while the project as a whole, including all approach routes and connectors, is estimated at $1.2 billion.

While on a tour at the base of the bridge in Bettendorf in May 2012, U.S. Transportation Secretary Ray LaHood said that, in comparison with other bridges that he has seen in other states, the current I-74 Bridge is one of the worst he's seen.

The new bridge will be just upstream of the existing bridge and will be a basket-handle, true-arch twin bridge with four lanes in each direction and a pedestrian/bicycle path. A ground-breaking ceremony for the new bridge was held on June 26, 2017. The westbound bridge is expected to be completed in late 2019 and the eastbound span is expected to be completed in late 2020. The existing I-74 bridge is anticipated to be removed in 2021. Winter weather conditions and the resulting high water over an extended period of time, however, have created delays and the opening of the first span has been pushed to the first half of 2020. On November 13, 2020, the Iowa-bound side of the new bridge opened to motorists.East-bound lanes of the new bridge are expected to open by the end of the year 2020.

All content from Kiddle encyclopedia articles (including the article images and facts) can be freely used under Attribution-ShareAlike license, unless stated otherwise. Cite this article:
I-74 Bridge Facts for Kids. Kiddle Encyclopedia.