Kids Encyclopedia Facts
This page is about the four cities known collectively as the "Quad Cities" in the Midwest United States. For other uses, see Quad Cities (disambiguation).

The Quad Cities is a region of four counties in northwest Illinois and Southeastern Iowa. The urban core consists of four principal cities: Davenport and Bettendorf in Iowa, and Rock Island and Moline in Illinois. These cities are the center of the Quad Cities Metropolitan Area, which as of 2013 had a population estimate of 383,781 and a CSA (Combined Statistical Area) population of 474,937, making it the 90th largest CSA in the nation.

Before European settlers came to inhabit the Quad Cities, the confluence of rivers had attracted many varying cultures of indigenous peoples, who used the waterways and riverbanks for their settlements for thousands of years. At the time of European encounter, it was a home and principal trading place of the Sauk and Fox tribes of Native Americans. Saukenuk was the principal village of the Sauk tribe and birthplace of its 19th-century war chief, Black Hawk. In 1832, Sauk chief Keokuk and General Winfield Scott signed a treaty in Davenport after the US defeated the Sauk and their allies in the Black Hawk War. The treaty resulted in the Native Americans ceding six million acres (24,000 km²) of land to the United States in exchange for a much smaller reservation elsewhere. Black Hawk State Historic Site in Rock Island preserves part of historic Saukenuk and is listed on the National Register of Historic Places.

The history of urban settlements in the Quad-Cities was stimulated by riverboat traffic. For 14 miles (21 km) between LeClaire, Iowa, and Rock Island, the Mississippi River flowed across a series of finger-like rock projections protruding from either bank. These rapids were difficult for steamboats to traverse. As demand for river-based transportation increased along the upper Mississippi, the navigability of the river throughout the "Rock Island Rapids" became a greater concern. Over time, a minor industry grew up in the area to meet the steamboats' needs. Boat crews needed rest areas to stop before encountering the rapids, places to hire expert pilots such as Phillip Suiter, who was the first licensed pilot on the upper Mississippi River, to guide the boat through the rocky waters, or, when the water was low, places where goods could be removed and transported by wagon on land past the rapids. Today, the rocks are submerged six feet underwater by a lake formed by two locks and dams.

As the Industrial Revolution developed in the United States, many enterprising industrialists looked to the Mississippi River as a promising source of water power. The combination of energy and easy access to river transportation attracted entrepreneurs and industrialists to the Quad Cities for development. In 1848, John Deere moved his plough business to Moline. His business was incorporated as Deere & Company in 1868. Deere & Company is the largest employer today in the Quad Cities.

The first railroad bridge built across the Mississippi River connected Davenport and Rock Island in 1856. It was built by the Rock Island Railroad Company, and replaced the slow seasonal ferry service and winter ice bridges as the primary modes of transportation across the river. Steamboaters saw the nationwide railroads as a threat to their business. On May 6, 1856, just weeks after completion of the bridge, an angry steamboater crashed the Effie Afton into it. John Hurd, the owner of the Effie Afton, filed a lawsuit against the Rock Island Railroad Company. The Rock Island Railroad Company selected Abraham Lincoln as their trial lawyer and won after he took the case to the US Supreme Court. Phillip Suiter was one of his expert witnesses. It was a pivotal trial in Lincoln's career.

Evolution of an identity

After the civil war, the region began to gain a common identity. The river towns that were thoughtfully planned and competently led flourished, while other settlements, usually get-rich-quick schemes for speculators, failed to pan out. By World War I, the towns of Davenport, Rock Island, and Moline had begun to style themselves as the "Tri-Cities", a cluster of three more-or-less equally sized river communities growing around the small bend of the Mississippi River where it flows west. But with the growth of Rock Island County, during the 1930s the term "Quad Cities" came into vogue, as East Moline was given "equal status". Despite the fact that the region had earned the name "Quad Cities", the National Basketball Association had a franchise in Moline, Illinois, from 1946 to 1951 called the "Tri-Cities Blackhawks". Then, with the opening of an Alcoa plant east of Davenport in 1948, the town of Bettendorf underwent so much growth that many people in the community discussed the adoption of the name "Quint Cities", and indeed, eventually Bettendorf passed East Moline in size. But by this time, the name "Quad Cities" had become known well beyond the area, and "Quint Cities" never caught on, despite the efforts of WOC-TV (as KWQC-TV was then called) and others.

Beginning in the late 1970s, economic conditions caused major industrial restructuring, which disrupted the basis of the region's economy. The major companies, agricultural manufacturers, ceased or scaled back operations in the Quad Cities. Factories which closed included International Harvester in Rock Island and Case IH in Bettendorf. Moline-based John Deere cut its labor headcount by one half. Later in the 1980s, Caterpillar Inc. closed its factories at Mount Joy and Bettendorf.

Since the 1990s, the Quad Cities governments, businesses, non-profits and residents have worked hard to redevelop the region. They have achieved national attention for their accomplishments.

Examples of revitalization and rebirth:

The Quad Cities area is one where the telephone companies cooperate with regional phone calls. Iowa and Illinois have different area codes (563 and 309 respectively), yet most calls originating and terminating within the core urban area are placed without long-distance charges by dialing just a 7-digit number. This helps the bi-state area promote itself as a single community, "joined by a river."

The John Deere Pavilion in Moline 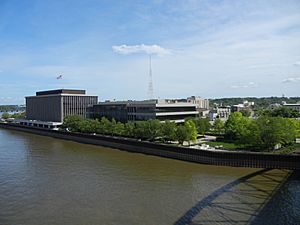 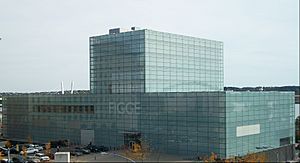 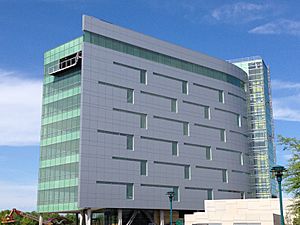 Since 1916, the region has supported the Quad City Symphony Orchestra, which presents a year-round schedule of concerts at the Adler Theatre in Davenport and Centennial Hall in Rock Island. The Handel Oratorio Society, dating to 1880, is the second-oldest organization of its kind in the nation and presents annual performances of "Messiah" along with another major work for choir and orchestra. The Augustana Choir, founded at Rock Island's Augustana College in 1934, is one of the nation's leading collegiate choruses. Major outdoor summer music festivals include the Bix Beiderbecke Memorial Jazz Festival, Mississippi Valley Blues Festival, and River Roots Live.

The Quad-Cities' three traditional community theaters – Playcrafters Barn Theatre (founded in 1920, comedies and dramas) and Quad City Music Guild (1948, musicals) in Moline, and Genesius guild (1957, outdoor Shakespeare and Greek comedies and tragedies) in Rock Island – were joined in 1976 by Circa '21 Dinner Playhouse, a professional dinner theater in downtown Rock Island's historic Fort Theatre. Ballet is performed at Ballet Quad Cities. The River Music Experience provides quality music programming, education, and outreach to all cities.ComedySportz provides improv comedy. Bluebox Limited is a Bettendorf-based film production company, and many outside productions companies have filmed movies in the Quad Cities in recent years. Historic buildings and sites listed on state and the National Register of Historic Places interpret the history of people's settlement and lives in the area.

Bill McAlister recorded a song titled "Quad City Queen" and included it on his "Illinois Opry" album. The song references the TPC golf course in Silvis, and the arsenal gate.

The current I-74 Bridge, connecting Bettendorf, Iowa, and Moline, Illinois, is located near the geographic center of the Quad Cities. 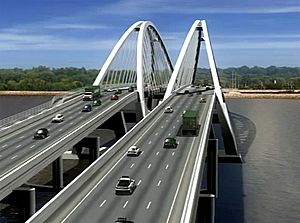 The future I-74 Bridge will span 4 lanes in each direction; construction is set to begin in 2018.

A total of five bridges accessible by automobiles connect Iowa with Illinois in the Quad Cities across the Mississippi River. The Fred Schwengel Memorial Bridge carries Interstate 80 and connects Le Claire, Iowa, with Rapids City, Illinois. Continuing downstream, the I-74 Bridge connects Bettendorf, Iowa, with Moline, Illinois, and is the busiest bridge with an average of 70,400 cars a day. The Government Bridge connects Downtown Davenport with the Rock Island Arsenal. Three bridges connect Davenport with Rock Island, Illinois; The Rock Island Centennial Bridge, The Crescent Rail Bridge, and the furthest downstream bridge, the Sergeant John F. Baker, Jr. Bridge which carries I-280.

There are three transit operators in the Quad Cities with limited interconnection between them. Rock Island County Metropolitan Mass Transit District (Quad Cities MetroLINK) serves the Illinois cities of Rock Island, Moline, East Moline, Milan, Silvis, Carbon Cliff, Hampton and Colona. It has 12 routes and a fleet of about 52 buses. It operates a river craft during summer months. In Iowa, Davenport Citibus has 13 fixed routes and operates 20 buses, six days a week and Bettendorf Transit operates five routes, Monday–Saturday, and has eight buses.

Amtrak currently does not serve the Quad Cities. The closest station is about 50 miles (80 km) away in Galesburg, Illinois. In 2008, the two current United States Senators from Iowa, Tom Harkin and Chuck Grassley, Illinois Senator Dick Durbin, and former President Barack Obama sent a letter to Amtrak asking them to begin plans to bring rail service to the Quad Cities. In October 2010, a $230 million federal fund was announced that will bring Amtrak service to the Quad Cities, with a new line running from Moline to Chicago. They hope to have the line completed in 2015, and offer two round trips daily to Chicago. In December 2011, the federal government awarded $177 million in funding for the Amtrak connection. It will establish passenger rail for the first time since the 1970s.

The Quad Cities are served by the Quad City International Airport, Illinois' third-busiest airport, located in Moline. The airport is marketed as a regional alternative to the larger airports in Chicago, nearly 200 miles (320 km) away. The smaller Davenport Municipal Airport is the home of the Quad City Air Show.

All content from Kiddle encyclopedia articles (including the article images and facts) can be freely used under Attribution-ShareAlike license, unless stated otherwise. Cite this article:
Quad Cities Facts for Kids. Kiddle Encyclopedia.