The Figge Art Museum is an art museum in Davenport, Iowa. The Figge, as it is commonly known, has an encyclopedic collection and serves as the major art museum for the eastern Iowa and western Illinois region. The Figge works closely with several regional universities and colleges (see below) as an art resource and collections hub for a number of higher education programs.

The museum opened on August 6, 2005, and is the renamed successor to the Davenport Museum of Art, which was opened on October 10, 1928, as the Davenport Municipal Art Gallery. The museum has its roots in the Davenport Art Association, which was founded before February 23, 1878, and was re-located on November 15, 1889, to the Bianca Wheeler art studio. The Figge Art Museum is one of the oldest art institutions in the country and is considered the first municipal art gallery in the United States. The Figge won an AIA award.

The new building was designed by Stirling Prize-winning Modernist British architect David Chipperfield. It was Chipperfield's first architectural commission in the United States. The Figge Art Museum gets its name from the V.O. and Elizabeth Kahl Figge Foundation, which donated $13 million towards its $47 million construction. The Figge family, a local banking family of Swiss origin, has a long tradition of philanthropy and cultural enrichment.

The first pieces of its collections were donated by Davenport community leader Charles Ficke (1850–1931), a successful lawyer and former mayor, who collected art from around the world. Robert E. Harsche, then Director of the Art Institute of Chicago, reported that to his knowledge no American public art gallery had "started out with so large a number of important paintings as a nucleus."

The museum has over 4,000 works of art, ranging from the 16th century to the present, and is best known for its extensive collection of Haitian, Colonial Mexican and Midwestern art, particularly pieces by Thomas Hart Benton, Marvin Cone and Grant Wood, including the only self-portrait Wood ever painted. In 1990, Grant Wood's estate, which included his personal effects and various works of art, became the property of the Figge Art Museum through his sister Nan Wood Graham, the woman portrayed in American Gothic.

The museum exhibits an important collection of pieces by Frank Lloyd Wright, the American architect and designer from the Midwest.

The Figge Art Museum is home to Western Illinois University's graduate program in Museum Studies, which offers a Master of Arts degree in the various aspects of museum management, such as curatorial design, museum administration and finance, art education, collections management, and marketing/PR. 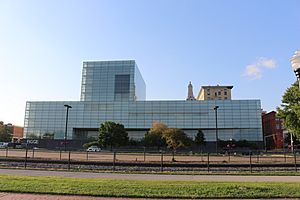 All content from Kiddle encyclopedia articles (including the article images and facts) can be freely used under Attribution-ShareAlike license, unless stated otherwise. Cite this article:
Figge Art Museum Facts for Kids. Kiddle Encyclopedia.