Johnson Wax Headquarters is the world headquarters and administration building of S. C. Johnson & Son in Racine, Wisconsin. Designed by American architect Frank Lloyd Wright for the company's president, Herbert F. "Hib" Johnson, the building was constructed from 1936 to 1939. Its distinctive "lily pad" columns and other innovations revived Wright's career at a point when he was losing influence. Also known as the Johnson Wax Administration Building, it and the nearby 14-story Johnson Wax Research Tower (built 1944–1950) were designated as a National Historic Landmark in 1976 as Administration Building and Research Tower, S.C. Johnson and Son. 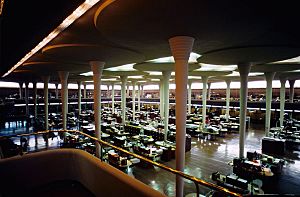 The Johnson Wax Headquarters were set in an industrial zone and Wright decided to create a sealed environment lit from above, as he had done with the Larkin Administration Building. The building features Wright's interpretation of the streamlined Art Moderne style popular in the 1930s. The building features many curved lines and required over 200 different curved "Cherokee red" bricks to create the sweeping curves of the interior and exterior. The warm, reddish hue of the bricks was used in the polished concrete floor slab as well; the white stone trim and white dendriform (tree like) columns create a subtle yet striking contrast. All of the furniture, manufactured by Steelcase, was designed for the building by Wright and it mirrored many of the building's unique design features.

Throughout the "Great Workroom," a series of the thin, white tree like columns rise to spread out at the top, forming a ceiling, the spaces in between the circles are set with skylights made of Pyrex glass tubing. At the corners, where the walls usually meet the ceiling, the glass tubes continue up, over and connect to the skylights creating a pleasant soft light. The Great Workroom is the largest expanse of space in the Johnson Wax Building, and it features no internal walls. It was originally intended for the secretaries of the Johnson Wax company, while a mezzanine holds the administrators. 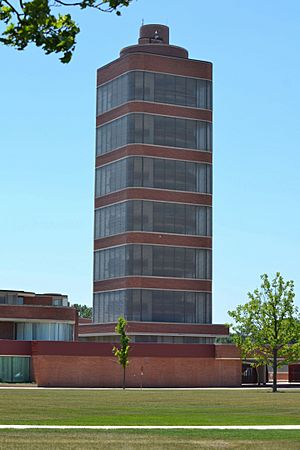 The Research Tower was a later addition to the building. t is one of only 2 existing high rise buildings by Frank Lloyd Wright. Elevators and stairway channels run up the core of the building. The single reinforced central core, termed by Wright as a tap root, was based on an idea proposed by Wright for the St. Mark's Tower in 1929.

The Research Tower is no longer in use because of the change in fire safety codes (it has one 29-inch wide twisting staircase), although the company is committed to preserving the tower as a symbol of its history. In 2013, an extensive 12-month restoration was completed. The tower was re-lit on December 21, 2013, and it was announced that it would be opened for public tours for the first time in its history. The research labs shown on the tour have been set up to appear frozen in time, including beakers, scales, centrifuges, archival photographs and letters about the building.

The Johnson Wax buildings are on the National Register of Historic Places, and the Administration Building and the Research Tower were each chosen by the American Institute of Architects as two of seventeen buildings by the architect to be retained as examples of his contribution to American culture. In addition, the Administration Building and Research Tower were both made National Historic Landmarks in 1976.

In 2008, the U.S. National Park Service submitted the Johnson Wax Headquarters and the Research Tower, along with nine other Frank Lloyd Wright properties, to a list for World Heritage Status. The 10 sites have been submitted as one total site.

All content from Kiddle encyclopedia articles (including the article images and facts) can be freely used under Attribution-ShareAlike license, unless stated otherwise. Cite this article:
Johnson Wax Headquarters Facts for Kids. Kiddle Encyclopedia.