Jasper Johns (born May 15, 1930) is an American painter, sculptor and printmaker whose work is associated with abstract expressionism, Neo-Dada, and pop art. He is well known for his depictions of the American flag and other US-related topics. Johns' works regularly receive millions of dollars at sale and auction, including a reported $110 million sale in 2010. At multiple times works by Johns have held the title of most paid for a work by a living artist.

Johns has received many honors throughout his career, including receipt of the National Medal of Arts in 1990, and the Presidential Medal of Freedom in 2011. In 2018, The New York Times called him the United States' "foremost living artist." 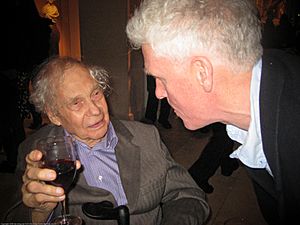 Johns studied a total of three semesters at the University of South Carolina, from 1947 to 1948. He then moved to New York City and studied briefly at the Parsons School of Design in 1949. In 1952 and 1953 he was stationed in Sendai, Japan, during the Korean War.

All content from Kiddle encyclopedia articles (including the article images and facts) can be freely used under Attribution-ShareAlike license, unless stated otherwise. Cite this article:
Jasper Johns Facts for Kids. Kiddle Encyclopedia.