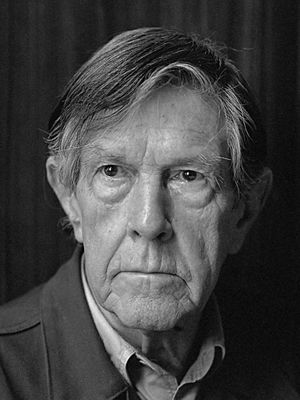 John Milton Cage, Jr. usually known as just John Cage, (September 5, 1912 - August 12, 1992) was an American composer, writer, philosopher, and visual artist. He was one of the first composers (or musicians) to introduce different styles of music to popular culture. He made mostly avant-garde music and electronic music, and was very well known for making the piece 4'33", which challenged what music is. He also wrote music for pianos that had been "prepared" by having screws and nails placed in them. He was gay. His life partner from 1943 until his death was choreographer Merce Cunningham (1919-2009). Cage died of a stroke in New York City.

This piece is in 3 movements (sections), and is special in that all of the movements are silent, the score having the Latin word for silence three times (tacit, tacit, tacit). Some people think that it is just a joke because of this, as there is nothing to listen to. It was written in 1952, and is 4 minutes and thirty three seconds long. Cage got the idea from being in a soundless chamber, but realising that even here there was no true silence because he could hear his heart beating.

All content from Kiddle encyclopedia articles (including the article images and facts) can be freely used under Attribution-ShareAlike license, unless stated otherwise. Cite this article:
John Cage Facts for Kids. Kiddle Encyclopedia.