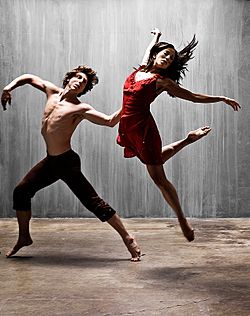 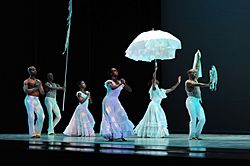 Modern Dance is related to ballet, but aims at different types of performance, instead of the classical ballets. Many of its dancers have been trained in ballet, and modern dance companies are rather similar to ballet companies.

The phrase 'Modern dance' is also applied to Ballroom dance of the English (now 'International') style. However, this page uses Modern dance as a term to describe 20th century concert dance, on stage. The modern dance style does not have set rules. Modern dancers often create their own dance routines using their emotions and moods, but on the other hand, many performances are choreographed.

Modern dancers prefer a more relaxed and free style of dancing. While ballerinas try to be light on their feet, modern dancers use body weight to increase movement.

Also modern dancing does not require specific costumes. So modern dancers often dance barefoot and choose whatever they want to wear. Modern dancers try to show their innermost emotions through dancing, often trying to get closer to their inner-selves. This is why many modern dancers choose a subject that is close to their hearts and attempts to express the subject to the audience.

Modern Dance was developed in the 20th century, mainly in the United States and Germany. In the early 1900s, several female dancers began rebelling against the strict rules of classical ballet. The pioneers of Modern Dance in the United States were Isadora Duncan, Loie Fuller, Ruth St. Denis and Martha Graham. The pioneers of Germany were Rudolf Von Laban and Mary Wigman.

All content from Kiddle encyclopedia articles (including the article images and facts) can be freely used under Attribution-ShareAlike license, unless stated otherwise. Cite this article:
Modern dance Facts for Kids. Kiddle Encyclopedia.