Augusta–Richmond County US /ə.ˈɡʌs.tə/ is a consolidated city-county on the central eastern border of the U.S. state of Georgia, and located at the fall line of the Savannah River, at the head of its navigable portion. It is in the piedmont section of the state.

According to 2012 US Census estimates, the Augusta–Richmond County population was 197,872, not counting the unconsolidated cities of Hephzibah and Blythe.

Augusta is the principal city of the Augusta–Richmond County Metropolitan Statistical Area, which as of 2012 had an estimated population of 580,270, making it the third-largest city and the second-largest metro area in the state after Atlanta. It is the 116th-largest city in the United States. Internationally, Augusta is best known for hosting The Masters golf tournament each spring.

The area along the river was long inhabited by varying cultures of indigenous peoples, who relied on the river for fish, water and transportation. The site of Augusta was used by Native Americans as a place to cross the Savannah River, because of its location on the fall line.

In 1735, two years after James Oglethorpe founded Savannah, he sent a detachment of troops to explore the upper Savannah River. He gave them an order to build at the head of the navigable part of the river. The expedition was led by Noble Jones, who created the settlement to provide a first line of defense for coastal areas against potential Spanish or French invasion from the interior. Oglethorpe named the town Augusta, in honor of Princess Augusta, wife of Frederick, Prince of Wales (she was the mother of King George III of the United Kingdom). Oglethorpe visited Augusta once, in September 1739. He did so while returning to Savannah from a perilous visit to Coweta Town, where he had met with a convention of 7,000 Native American warriors and concluded peaceful relations with several Native American groups in what is today the northern and western part of Georgia. Augusta was the second state capital of Georgia from 1785 until 1795 (alternating for a period with Savannah, the first).

Augusta developed rapidly as a market town as the Black Belt in the Piedmont was developed for cotton cultivation. Invention of the cotton gin made processing of short-staple cotton profitable, and this type of cotton was well-suited to the upland areas. Cotton plantations were worked by slave labor, with hundreds of thousands of slaves shipped from the Upper South to the Deep South in the domestic slave trade. Many of the slaves were brought from the Lowcountry, where their Gullah culture had developed on the large Sea Island cotton and rice plantations

As a major city in the area, Augusta was a center of activities during Reconstruction and after. In the mid-20th century, it was a site of civil rights demonstrations. In 1970 Charles Oatman, a mentally disabled teenager, was killed by his cellmates in an Augusta jail. A protest against his death broke out in a riot involving 500 people, after six black men were killed by police, each found to have been shot in the back. The noted singer and entertainer James Brown was called in to help quell lingering tensions, which he succeeded in doing. 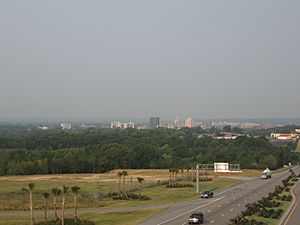 The Augusta skyline, as seen from North Augusta, South Carolina 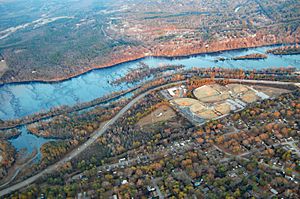 Savannah River and the Augusta Canal, with River Watch Parkway and residential areas in foreground

Augusta is located about halfway up the Savannah River on the fall line, which creates a number of small falls on the river. The city marks the end of a navigable waterway for the river and the entry to the Georgia Piedmont area. 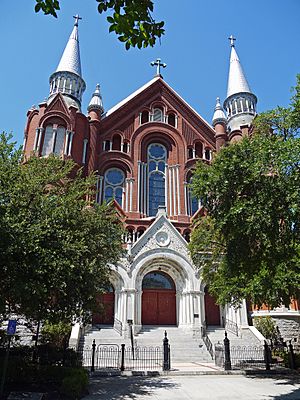 Augusta Downtown Historic District is a historic district that encompasses most of downtown Augusta and its pre-Civil War area. It was listed on the National Register of Historic Places in 2004.

There were 75,208 households, out of which 28.0% had children under the age of 18 living with them, 35.2% were headed by married couples living together, 22.7% had a female householder with no husband present, and 37.1% were non-families. 30.7% of all households were made up of individuals and 8.8% had someone living alone who was 65 years of age or older. The average household size was 2.46 and the average family size was 3.09.

The Jewish community in Augusta dates back to the early 19th century. Today, there are two congregations, Congregation Children of Israel (Reform) and Adas Yeshurun (Conservative). There is also a Chabad-Lubavitch house. Around 1,300 Jews currently live in Augusta, who collectively support a Jewish Community Center.

Augusta is twinned with:

All content from Kiddle encyclopedia articles (including the article images and facts) can be freely used under Attribution-ShareAlike license, unless stated otherwise. Cite this article:
Augusta, Georgia Facts for Kids. Kiddle Encyclopedia.