Columbus is a city in the U.S. state of Georgia and the county seat of Muscogee County, with which it is consolidated. According to the 2013 estimates from the U.S. Census Bureau, Columbus has a population of 202,824 residents, with 316,554 in the greater Columbus-Phenix City metropolitan area. The metro area joins the nearby Alabama cities of Auburn and Opelika to form the Columbus-Auburn-Opelika Combined Statistical Area, which has an estimated population of 501,649. Columbus is directly to the east across the Chattahoochee River from Phenix City, Alabama. Situated at the heart of the Chattahoochee Valley, Columbus is Georgia's second-largest city and fourth-largest metropolitan area.

Columbus lies 100 miles (160 km) southwest of Atlanta. Fort Benning, home of the United States Army Infantry School and a major employer, is located south of the city in Chattahoochee County. Columbus is home to museums and tourism sites, including the National Infantry Museum, dedicated to the United States Army's Infantry Branch. It has the longest urban whitewater rafting course in the world constructed on the Chattahoochee River. 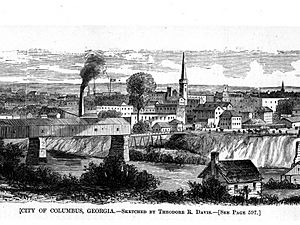 This was for centuries and more the traditional territory of the Creek Indians, who became known as one of the Five Civilized Tribes of the Southeast after European contact. Those who lived closest to white-occupied areas conducted considerable trading and adopted some European-American ways.

Founded in 1828 by an act of the Georgia Legislature, Columbus was situated at the beginning of the navigable portion of the Chattahoochee River and on the last stretch of the Federal Road before entering Alabama. The city was named for Christopher Columbus, its founders likely influenced by the writings of Washington Irving. The plan for the city was drawn up by Dr. Edwin L. DeGraffenried, who placed the town on a bluff overlooking the river. Across the river to the west, where Phenix City, Alabama is now located, Creek Indians still lived until they were forcibly removed in 1836 by the federal government to make way for European-American settlers.

The river served as Columbus's connection to the world, particularly enabling it to ship its commodity cotton crops from the plantations to the international cotton market via New Orleans and ultimately Liverpool, England. The city's commercial importance increased in the 1850s with the arrival of the railroad. In addition, textile mills were developed along the river, bringing industry to an area reliant upon agriculture. By 1860, the city was one of the more important industrial centers of the South, earning it the nickname "the Lowell of the South," referring to an important textile mill town in Massachusetts. 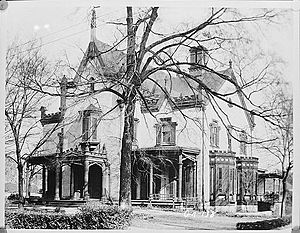 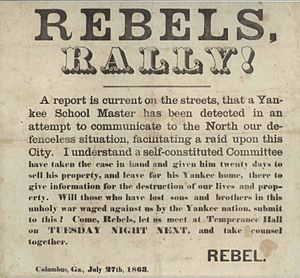 An 1863 Broadside published in Columbus warning of an impending attack

When the Civil War broke out in 1861, the industries of Columbus expanded their production; this became one of the most important centers of industry in the Confederacy. During the war, Columbus ranked second to Richmond in the manufacture of supplies for the Confederate army. In addition to textiles, the city had an ironworks, a sword factory, and a shipyard for the Confederate Navy.

Unaware of Lee's surrender to Grant and the assassination of Abraham Lincoln, Union and Confederates clashed in the Battle of Columbus, Georgia, on Easter Sunday, April 16, 1865, when a Union detachment under General James H. Wilson attacked the city and burned many of the industrial buildings. John Stith Pemberton, who later developed Coca-Cola in Columbus, was wounded in this battle. After becoming addicted to morphine, Pemberton sought out a replacement for his addiction. After creating Coca-Cola, he carried it to Atlanta before he died in 1888. Col. Charles Augustus Lafayette Lamar, owner of the last slave ship in America, was also killed here. A historic marker has been erected in Columbus. It notes that this was the site of the "Last Land Battle in the War from 1861 to 1865."

Reconstruction began almost immediately and prosperity followed. Factories such as the Eagle and Phenix Mills were revived and the industrialization of the town led to rapid growth; the city outgrew its original plan. The Springer Opera House was built on 10th Street, attracting such notables as British writer Oscar Wilde. The Springer is now the official State Theater of Georgia.

By the time of the Spanish–American War, the city's modernization included the addition of trolleys extending to outlying neighborhoods such as Rose Hill and Lakebottom, and a new water works. Mayor Lucius Chappell also brought a training camp for soldiers to the area. This training camp named Camp Benning would grow into present-day Fort Benning, named for General Henry L. Benning, a native of the city.

Downtown Columbus in the early 1950s

In the spring of 1866 the Ladies Memorial Association of Columbus passed a resolution to set aside one day annually to memorialize the Confederate dead. The secretary of the association, Mrs. Charles J. (Mary Ann) Williams, was directed to write a letter inviting the ladies of every Southern state to join them in the observance. The letter was written in March 1866 and sent to representatives of all of the principal cities in the South, including Atlanta, Macon, Montgomery, Memphis, Richmond, St. Louis, Alexandria, Columbia, and New Orleans. This was the beginning of the influential work by ladies' organizations to honor the war dead.

The date for the holiday was selected by Elizabeth "Lizzie" Rutherford Ellis. She chose April 26, the first anniversary of Confederate General Johnston's final surrender to Union General Sherman at Bennett Place, North Carolina. For many in the South, that act marked the official end of the Civil War.

In 1868, General John A. Logan, commander in chief of the Union Civil War Veterans Fraternity called the Grand Army of the Republic (GAR), launched the Memorial Day holiday that has become observed in the entire United States. General Logan's wife said he had borrowed from practices of Confederate Memorial Day. She wrote that Logan "said it was not too late for the Union men of the nation to follow the example of the people of the South in perpetuating the memory of their friends who had died for the cause they thought just and right."

With the expansion of the city, leaders who promoted establishing a university, founded Columbus College, a two-year institution which later was developed as Columbus State University, now a comprehensive center of higher learning.

The city government became consolidated with the county in 1971, the first of its kind in Georgia (and one of only 16 in the U.S. at the time).

Expanding on its industrial base of textile mills, the city has been the home of the headquarters for Aflac, Synovus, TSYS and Carmike Cinemas. 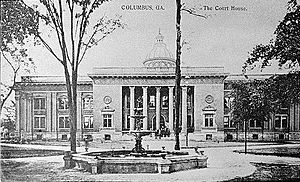 The Muscogee County Courthouse in 1941, which was demolished in 1970.

Early efforts to halt the gradual deterioration of downtown began with the saving and restoration of the Springer Opera House in 1965. It was designated as the State Theatre of Georgia, helping spark a historic preservation movement in the city. This has documented and preserved various historic districts in and around downtown.

Through the late 1960s and early 1970s, large residential neighborhoods were built to accommodate the soldiers coming back from the Vietnam War and for those associated with Ft. Benning. These range from Wesley woods to Leesburg to Brittney and Willowbrook and the high end Sears woods and Windsor park. Large tracts of blighted areas were cleaned up. A modern Columbus Consolidated Government Center was constructed in the city center. A significant period of urban renewal and revitalization followed in the mid to late 1990s.

During the 2000s, expansion and historic preservation continued throughout the city. South Commons has been revitalized. This area combines the 1996 Olympic softball competition complex, A. J. McClung Memorial Stadium, Golden Park, the Columbus Civic Center, and the recently added Jonathan Hatcher Skateboard Park. The National Infantry Museum has been constructed in South Columbus, located outside the Fort Benning main gate.

Columbus has a center for the fine and performing arts. RiverCenter for the Performing Arts, which opened in 2002, houses Columbus State University's music department. In 2002 Columbus State's art and drama departments moved to downtown locations. Such initiatives have provided Columbus with a cultural niche and with vibrant and modern architecture mixed among older brick facades.

The "Ready to Raft 2012" campaign is a project that created an estimated 700 new jobs and is projected to bring in $42 million annually to the Columbus area. The project resulted in the longest urban whitewater rafting venue in the world. This, in addition to other outdoor and non-outdoor tourist attractions, led to around 1.8 million visitors coming to Columbus during the fiscal year 2015, according to the Columbus Convention and Visitors Bureau.

In upcoming years, the city predicts that an additional 30,000 soldiers will be trained annually at Fort Benning due to base realignment and closure of other facilities. As a result of this, Columbus is expected to see a major population increase.

Columbus is one of Georgia's three Fall Line Cities, along with Augusta and Macon. The fall line is where the hilly lands of the Piedmont plateau meet the flat terrain of the coastal plain. As such, Columbus has a varied landscape of rolling hills on the north side and flat plains on the south. The fall line causes rivers in the area to decline rapidly towards sea level. Textile mills were established here in the 19th and early 20th centuries to take advantage of the water power from the falls. Columbus was developed along the Chattahoochee River.

Columbus has a humid subtropical climate according to the Köppen climate classification system. Daytime summer temperatures often reaches highs in the mid 90s, and low temperatures in the winter average in the upper 30s. Columbus is often considered a dividing line or "natural snowline" of the southeastern United States with areas north of the city receiving snowfall annually, with areas to the south typically not receiving snowfall every year or at all. Columbus is within USDA hardiness zone 8b in the city center and zone 8a in the suburbs. 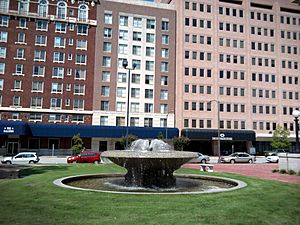 One of Columbus' nicknames: "The Fountain City."
Main page: Neighborhoods in Columbus, Georgia 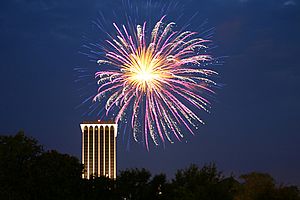 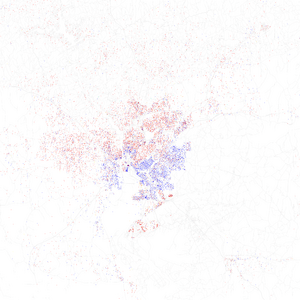 Map of racial distribution in Columbus, 2010 U.S. Census. Each dot is 25 people: White, Black, Asian, Hispanic or Other (yellow) 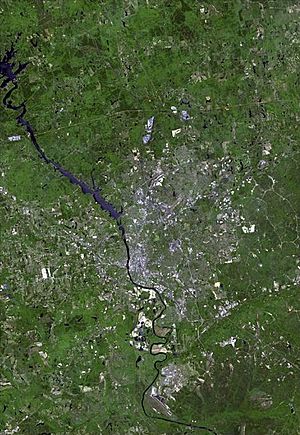 There were 69,819 households out of which 34.6% had children under the age of 18 living with them, 44.7% were married couples living together, 19.6% had a female householder with no husband present, and 31.7% were non-families. 26.7% of all households were made up of individuals and 9.4% had someone living alone who was 65 years of age or older. The average household size was 2.54 and the average family size was 3.08.

Columbus contains approximately 200 Christian churches, with the Southern Baptist Convention being the largest denomination by number of churches. Columbus is also home to three Kingdom Halls for Jehovah's Witnesses, and one Greek Orthodox Church. Other religions are represented by two synagogues, three mosques, and a Hindu temple, the latter two reflecting an increasing number of immigrants in the region from Southeast Asia.

Columbus is served by one major indoor shopping mall, Peachtree Mall, which is anchored by major department stores Dillard's, Macy's, and J.C. Penney. The total retail floor area is 821,000 square feet (76,300 m2). Major strip malls include Columbus Park Crossing, which opened in 2003, and The Landings, which opened in 2005. Columbus is also served by The Shoppes at Bradley Park, a lifestyle center. 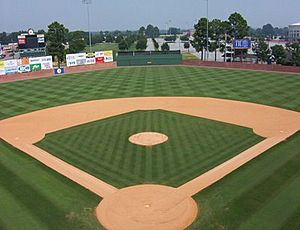 Below is the list of major venues in the city of Columbus: 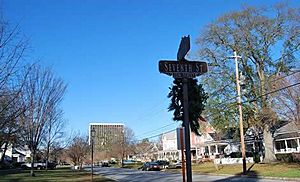 Columbus is home to 8 historic districts, all listed in the NRHP. They are as follows: 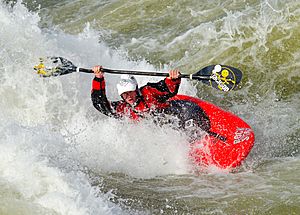 Whitewater kayaking in the Chattahoochee River

The Chattahoochee River white water opened in 2012. After the Eagle & Phenix Dam was breached, river flow was restored to natural conditions allowing the course to be created. The 2.5-mile (4.0 km) course is the longest urban whitewater rafting and kayaking in the world, and has been ranked the world's best manmade whitewater course by USA Today. It also features the Blue Heron Adventure, a zip-line connecting users from the Georgia side of the river to the Alabama side.

All content from Kiddle encyclopedia articles (including the article images and facts) can be freely used under Attribution-ShareAlike license, unless stated otherwise. Cite this article:
Columbus, Georgia Facts for Kids. Kiddle Encyclopedia.