Kids Encyclopedia Facts
Not to be confused with Moore's Fort.

Fort Moore was the second of two historic U.S. Military Forts in Los Angeles, California, during the Mexican–American War. It lay straight above the junction of the Hollywood Freeway and Broadway, on an historic hill that once sheltered the old Plaza.

The landmark hill took its name, Fort Hill, from the first fort, and the hill afforded sweeping views of the old adobe town and the vineyards in the swale of the Los Angeles River. Fort Hill was a spur of the ridge that runs from the Quarry Hills (Elysian Park) southward to Beaudry’s Bunker Hill; it originally stretched east between 1st Street and Ord Street. In old photographs, it forms a backdrop just behind the Plaza Church and square. By 1949, what was left of the hill under the fort was cut down when the Hollywood Freeway was put through.

The fort is now memorialized by the Fort Moore Pioneer Memorial, a stone mural on Hill Street, along the south side of Grand Arts High School.

On August 13, 1846, early in the conflict, U.S. naval forces under Commodore Robert F. Stockton arrived at Los Angeles and raised the American flag without opposition. A small occupying force of 50 Marines, under Captain Archibald H. Gillespie, built a rudimentary barricade on what was then known as Fort Hill overlooking the small town.

The harsh martial law of Captain Gillespie soon ignited a popular uprising among Californios and Mexicans led by General José María Flores beginning on September 22, 1846. Known as the Siege of Los Angeles, Californios assembled a force to retake Los Angeles. Gillespie's fifty marines were able to resist an initial attack on the government house in town and regrouped on Fort Hill, where they strengthened the fortification with sandbags and mounted their cannon. As time passed, the Californio forces opposing the U.S. takeover grew to just over 600 men, with several Californio citizens voicing opposition. General Flores offered an ultimatum: leave within 24 hours or face attack. Gillespie agreed to withdraw from Los Angeles, under safe passage, on September 30, 1846.

On October 7, the U.S. forces regrouped, with Commodore Stockton sending 350 Americans, including 200 U.S. Marines, under U.S. Navy Capt. William Mervine, to retake Los Angeles. The marines were defeated in their attempt at the Battle of Dominguez Rancho, as Stockton's fleet fled south to San Diego. In December, U.S. Army forces under Captain Stephen W. Kearny were defeated by the Californio Lancers at the Battle of San Pasqual. After regrouping and resupplying forces in San Diego, on January 10, 1847, Los Angeles was recaptured by the combined 700 man forces of John C. Fremont, Stockton and Kearny, after the Battle of Rio San Gabriel and the Battle of La Mesa. With the signing of the Treaty of Cahuenga on January 13, 1847, war in Alta California ended.

On January 12, 1847, to secure the area from future attack, U.S. forces began erecting a 400-foot (120 m) long breastwork on the same strategic site as the previous Fort Hill and named it the Post at Los Angeles. The plans were later revised, and on April 23 a larger defensive structure was begun on the same site. Constructed by the Mormon Battalion and the U.S. 1st Dragoons, it was designed for six cannons. It was never completed and was dedicated as Fort Moore on July 4, 1847, named after Captain Benjamin D. Moore, 1st Dragoons, one of 22 Americans killed in the Battle of San Pasqual in San Diego County, on December 6, 1846.

Lieutenant William T. Sherman ordered the garrison withdrawn in 1848, and the fort was abandoned in 1849 and decommissioned in 1853. In later years the site was leveled and became a public playground.

It was an approximate equivalent of a later road house, an airy place with a view, refreshments and food, with half of its customers a polite crowd and half of them a tough lot.

After Philippi closed down his beer garden resort, he sold the place in 1887 to Mary (Hollister) Banning (1846–1919), widow of the "Father of the Port of Los Angeles" Phineas Banning. She converted it into a residence, what locals came to call the "Banning Mansion." She lived there several years with her daughters, Mary Banning (1871–1956) and Lucy Banning (1876–1929). The enormous old structure made a charming home, which was cut up into suitable parlors and bedrooms and elegantly furnished, with a fine view. It was the scene of many social events attended by the first families of the city who drove up to it in their carriages. With the growth of the city, however, society moved to newer districts and left the old place to end its days as a rooming house.

The cemetery was overseen by the city starting in 1869. It was not well taken care of, lacking clearly delineated boundaries, complete records or adequate maintenance. The Los Angeles City Council passed a resolution on August 30, 1879, closing the cemetery to any future burials except for those with already reserved plots. By 1884, the city had sold portions of the cemetery as residential lots and the rest to the Los Angeles Board of Education (later the Los Angeles Unified School District (LAUSD)).

The city never removed any bodies, and the former cemetery was the site of repeated, grisly findings and much negative press. As a result, the city began moving the bodies, most to Evergreen Cemetery, Rosedale Cemetery and Hollywood Memorial Park Cemetery, with the final bodies being transferred in May 1947. The recent construction of Los Angeles High School #9 resulted in the discovery of additional human remains. These were excavated by archaeologists in 2006. 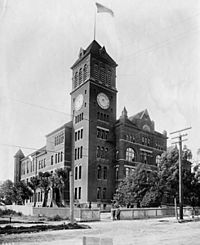 LAHS was at this location on Fort Moore Hill until 1917, when the high school was moved again. Part of the site was later replaced by the headquarters of the LAUSD. Because of political and financial hardship caused by the construction of the nearby Belmont Learning Center, the LAUSD moved from the location in 2001 so that a new high school could be built on its location. 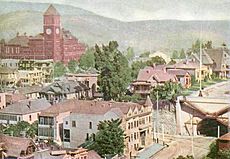 Second school circa 1910s. Broadway Tunnel is to the right.

Most of Fort Moore Hill was removed in 1949 for the construction of the Hollywood Freeway, which was opened in December 1950, and in 1956 a memorial for the old fort and its American pioneers was placed on a site north of the freeway. A recent restoration was completed in January 2019.

The Fort Moore Pioneer Memorial is a large stone memorial wall built in 1957 on part of the original location of Fort Moore facing North Hill Street, in Los Angeles, California.

As the largest bas-relief military monument in the United States, it honors the Mormon Battalion, the U.S. 1st Dragoons, and the New York Volunteers who raised the American flag over the fort on July 4, 1847, at the first Independence Day in Los Angeles.

Funded by the County of Los Angeles, the City of Los Angeles, the Los Angeles Board of Education and the Department of Water and Power, the memorial was designed by Kazumi Adachi and Dike Nagano and dedicated on July 3, 1957. Featuring four different panels, a 78 feet (24 m) by 45 feet (14 m) terra cotta panel designed by Saltus Award-winner Henry Kreis is the most prominent feature and portrays the July 4 event.

Other panels represent the agricultural and spiritual foundation of the region; transportation that shaped the city at the end of the 19th century; and the crucial role that water and electricity play in a large modern city.

An 80 feet (24 m) wide waterfall sits to the right of the panels. It was out of service since a 1977 drought, and turned on in December 2018 after restoration work was completed. The monument also includes a 279 feet (85 m) long brick facade that serves as a backdrop for a 68 feet (21 m) high pylon designed by noted American sculptor Albert Stewart. The pylon features a 16 feet (4.9 m) by 11 feet (3.4 m) American eagle as well as an incised relief on the low wall along the sidewalk depicting the 1,100-mile (1,770 km) march of the Mormon Battalion from Council Bluffs, Iowa, to Los Angeles.

All content from Kiddle encyclopedia articles (including the article images and facts) can be freely used under Attribution-ShareAlike license, unless stated otherwise. Cite this article:
Fort Moore Facts for Kids. Kiddle Encyclopedia.