South of Broadway is a much more residential area, characterized by historic homes, new infill construction, and some public housing. This part of Downtown Columbus has the highest concentration of hotels, particularly along Front Avenue, and the Broadway commercial corridor is the center of business.

The following is a list of the eight tallest buildings in Columbus. 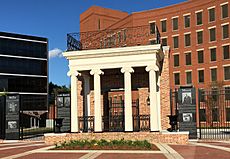 Downtown Columbus is home to many Antebellum homes, most listed in the NRHP, including the 1839 Goetchius House, the Garrett-Bullock House, and the Illges House. The Mott House was destroyed by fire in 2014; its memorial facade, pictured, was completed in 2016.

Downtown Columbus is full of places that may interest tourists. These places include government buildings, sporting venues and other miscellaneous places, such as parks and convention centers. 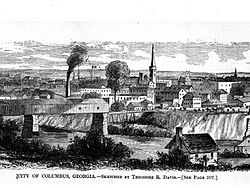 Downtown in 1880, showing the Church of the Holy Family (image by Theodore R. Davis)

There are many modes of transportation in Downtown Columbus that can be used by both tourists and residents. METRA Transit System operates bus service in downtown, which connects riders to other places in the city. The primary way of getting around downtown for many people is by car. Downtown Columbus is accessible from Interstate 185 by J. R. Allen Parkway, which allows direct travel into the area via 2nd Avenue. Downtown is also served by two arterial roads, Veterans Parkway (north–south) and Victory Drive (east–west).

There is confusion brought about by the use of the terms "Downtown" and "Uptown" for Columbus' central business district. Uptown Columbus is the title given to both a non-profit organization operating to encourage area growth and development (sometimes called "urban renewal") and also to the actual physical area of that development itself, which is an expanding subsection of the Downtown district located in the areas from Broadway to the Chattahoochee River.

On April 20, 2009, at approximately 12:40 AM Eastern Daylight Time, a category EF2 tornado hit downtown with winds up to 135 miles per hour (217 km/h). This tornado caused damage to the Columbus State University Campus, the Springer Opera House, and the RiverCenter for the Performing Arts. This is the first time a tornado touched ground in downtown Columbus since weather records keeping began in the 1890s. While there were dozens of injuries, there were no fatalities.

All content from Kiddle encyclopedia articles (including the article images and facts) can be freely used under Attribution-ShareAlike license, unless stated otherwise. Cite this article:
Downtown Columbus, Georgia Facts for Kids. Kiddle Encyclopedia.