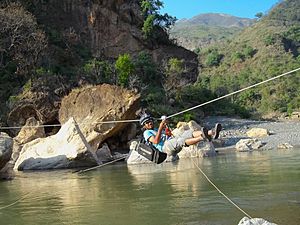 A zip-line (also called a zip line, zip wire, aerial runway, aerial ropeslide, death slide or Tyrolean crossing) is a device that allows a person to slide down an inclined wire or rope. The process uses gravity to propel the user. You can be stopped by dragging your feet or by water. Often a pulley is used suspended on a cable, usually made of stainless steel. Zip-lines are often used for entertainment. Some are short and low designed for children on a playground. Zip-lines are often used as a means of getting to remote areas, such as a rainforest canopy or crossing a river.

The zip-wire has been used as a way to get around in some mountainous countries for over 2,000 years. Since the 1700s they have been used in places like Europe, China and the Himalayas. In the Australian outback, zip-lines were occasionally used for delivering food, cigarettes or tools. They were useful for people working on the other side of an obstacle such as a gully or river. Australian soldiers have used them to bring ammunition to forward positions during wars.

During World War II the United States discovered they were behind the Russians and the Germans in using parachutes to deploy soldiers quickly. In setting up training the army decided to use drop towers with zip lines to simulate a parachute landing. It was a success and has been used since that time to train airborne forces.

Costa Rica claims to be the birthplace of modern zip-line tours. Graduate students, John Williams and Donald Perry were rock-climbers who were in Costa Rica studying botanical (plants) and entomological (insects) subjects. They used their rock climbing equipment to climb trees. When they used lines to get down or move to lower trees, other students did too. Soon tours started in Costa Rica for entertainment. 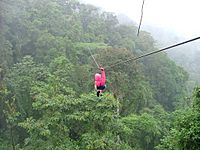 Zip-line tours are becoming popular vacation activities. Some are as short as 100 feet while others may be as long as a mile. The jungles of Costa Rica, Florida, Puerto Vallarta,and Nicaragua are popular places for those interested in experiencing zip-lines. Since 2000, the number of zip-line tours in the United States has grown to over 200. Zip-line tours are not available at places such as Santa Catalina Island, Big Bear and the San Diego Zoo in California. Prices vary for the ride. The San Diego Zoo ride costs $112 (for two lines). At the Santa Paula, California KOA the cost is $10 for an 800 foot long zip-line. At Durango Colorado there are 27 zip lines totaling 1.5 miles (2.4 km). The tour lasts for five hours.

In Sun City, South Africa the Zip 2000 is one of the world's longest zip lines at over 1 mile (1.6 km) in length. The world's longest zip-line tour is "Miss Sky Canopy Tour" in Nosara, Costa Rica. It runs for 7 miles (11 km) and is made up of 21 runs. Taihape, New Zealand has one of the fastest zip-lines (called flying foxes locally) with speeds at over 100 miles per hour (160 km/h).

All content from Kiddle encyclopedia articles (including the article images and facts) can be freely used under Attribution-ShareAlike license, unless stated otherwise. Cite this article:
Zip-line Facts for Kids. Kiddle Encyclopedia.