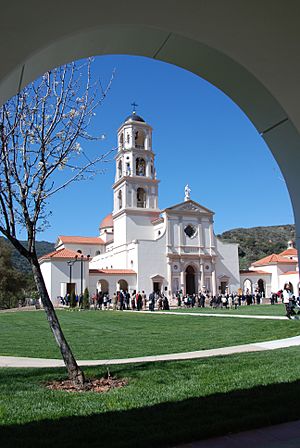 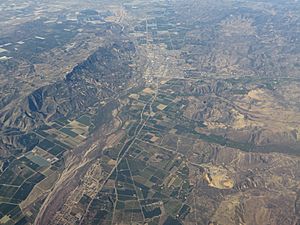 Santa Paula, California, the Santa Clara River and South Mountain from the air, 2015 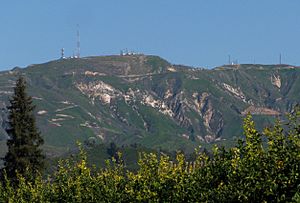 Santa Paula (Spanish for "St. Paula") is a city in Ventura County, California. Situated amid the orchards of the Santa Clara River Valley, the city advertises itself to tourists as the "Citrus Capital of the World". Santa Paula was one of the early centers of California's petroleum industry. The Union Oil Company Building, the founding headquarters of the Union Oil Company of California in 1890, now houses the California Oil Museum. The population was 30,657 at the 2020 census, up from 29,321 at the 2010 census.

The area of what today is Santa Paula was originally inhabited by the Chumash, a Native American people. In 1769, the Spanish Portola expedition, first Europeans to see inland areas of California, came down the Santa Clara River Valley from the previous night's encampment near Fillmore and camped in the vicinity of Santa Paula on August 12, near one of the creeks coming into the valley from the north (probably Santa Paula Creek). Fray Juan Crespi, a Franciscan missionary travelling with the expedition, had previously named the valley Cañada de Santa Clara. He noted that the party traveled about 9 to 10 miles (14 to 16 km) that day and camped near a large native village, which he named San Pedro Amoliano. The site of the expedition's arrival has been designated California Historical Landmark No. 727.

Franciscan missionaries, led by Father Junipero Serra, became active in the area after the founding of the San Buenaventura Mission and established an Asistencia; the town takes its name from the Catholic Saint Paula. Santa Paula is located on the 1843 Rancho Santa Paula y Saticoy Mexican land grant.

In 1872 Nathan Weston Blanchard purchased 2,700 acres (10.9 km2) and laid out the townsite. Considered the founder of the community, he planted seedling orange trees in 1874. Several small oil companies owned by Wallace Hardison, Lyman Stewart and Thomas R. Bard were combined and became the Union Oil Company in 1890.

The large South Mountain Oil Field southeast of town, just across the Santa Clara River, was discovered by the Oak Ridge Oil Company in 1916, and developed methodically through the 1920s, bringing further economic diversification and growth to the area. While the field peaked in production in the 1950s, Occidental Petroleum continues to extract oil through its Vintage Production subsidiary and remains a significant local employer.

A 500-acre (200 ha) master-planned community of 1,500 homes is expected to expand the town significantly when it begins construction in 2016.

The town has been devastated twice by floods and was affected by a nearby truck explosion that resulted in an industrial disaster.

The first, known as the Great Flood of 1862, began on December 24, 1861. It rained for almost four weeks, reaching a total of 35 inches at Los Angeles. The second was caused by the failure and near complete collapse of the St. Francis Dam, which took place in the middle of the night on March 12, 1928. The dam was holding a full reservoir of 12.4 billion gallons (47 billion liters) of water that with the dam collapsed, began surging down San Francisquito Canyon and emptying into the Santa Clara River. The town was first hit by the waters at approximately 3:00 a.m. Though hundreds of homes and structures were destroyed, the loss of life would have been greater if it were not for two motorcycle police officers that noisily warned as many people as possible. A sculpture called "The Watchers" in downtown Santa Paula depicts this act of heroism.

A vacuum truck exploded at the Santa Clara Waste Water plant in the early morning hours of November 18, 2014. Two workers were injured in the initial explosion, three responding fire-fighters were injured by the fumes from the spill of a highly volatile chemical mixture, and 50 others were exposed to fumes and required treatment at local hospitals. The driver was transporting waste from a temporary storage drum to a processing center when he stopped to take a meal break. The rear of the truck exploded, spreading a white liquid over a 300-by-400-foot area (91 by 122 m) that spontaneously combusted as it dried and was sensitive to shock, pressure and the application of water or oxygen. The tires of the first fire truck on the scene and the boots of three firefighters sparked small explosions when they drove and walked over the substance as they went to help the injured workers. The incident evolved into a disaster when later in the morning additional materials began to burn and explode, which resulted in a three-mile-long plume of toxic smoke (4.8 km) and the closing of Highway 126. Chemical smoke drifted over the area and nearby residents and businesses were required to evacuate.

What was initially reported as sewage was found to be about 1,000 US gallons (3,800 l; 830 imp gal) of a chemical mixture consisting of some sort of organic peroxide. In the first days of the investigation, officials speculated that two inert chemicals mistakenly mixed in the truck and created an organic peroxide substance with sulfuric acid appearing to be part of the mix. Organic peroxide combines unstably bound oxygen together with hydrogen and carbon in the same molecule and ignites easily and then burns rapidly and intensely. While field testing was performed on the reactive material for initial identification, the county hazardous materials manager found that laboratories would not test the chemicals over concerns that lab personnel could be injured or their equipment damaged. Three weeks after the incident, the substance was still highly susceptible to friction and seemed to react to something as slight as wind. Sodium chlorite was identified in an internal investigation by the firm in the months following the disaster. They claimed that the chemical was being used as a water treatment agent for the first time and was stored in the same type of storage container as wastewater. The worker combined the chemical with wastewater in the vacuum truck where the chemical interacting with organic material caused an explosion that blew off the back of the truck. A former county district attorney, retained by a company attorney, issued a report in March 2015 that provided an explanation of events indicating that the worker may have accidentally combined the chemicals. Later, investigators found that an inspection by a Defense Logistics Agency contractor was scheduled for that morning and officials of the firm had directed the transfer of these hazardous materials to another location.

Although the explosion and resulting fumes caused injuries including the lungs of three fire-fighters who remained off-duty indefinitely, the material scattered around the site was found to be non-hazardous for clean-up purposes. The two fire engines that arrived first remained out of service for months and may ultimately have to be scrapped. The Ventura County Sheriff declared a local emergency so the Ventura County Board of Supervisors could ratify the action and allow the county to seek reimbursement for its costs from state disaster relief funds. The U.S. Environmental Protection Agency oversaw the decontamination of the site. The material was neutralized and solidified on site. Tons of material were eventually taken to the Chiquita Canyon Landfill in nearby Castaic. Almost three months later on February 10, 2015, the County Supervisors ended the emergency declaration. With the permit to operate suspended, the firm needed to finish removing the waste materials and provide a plan that would show how another such incident would be prevented before being allowed to start accepting liquid waste again. County regulators and county supervisors also wanted the city of Oxnard to agree to accept the waste water again after an analysis of the safety of the pipeline.

On August 7, 2015, a Ventura County grand jury indicted the Santa Clara Waste Water Co. and 10 other defendants. Following the indictment, the district attorney had the 10 defendants arrested on suspicion of several felonies and misdemeanors, including filing a false or forged instrument, dissuading a witness from reporting a crime, known failure to warn of serious concealed danger, withholding information regarding a substantial danger to public safety, conspiracy to commit a crime, causing impairment of an employee’s body, and disposal of hazardous waste.

The facility at 815 Mission Rock Road, Santa Paula, provided service to over 30,000 waste generators. At the time, it had received and processed over 2,000,000,000 US gallons (7.6×109 l) since it opened in 1959. The company says they treat about 100 different streams of waste. The owner of facility said that they never had a major problem such as this since the plant only takes non-hazardous waste. The capacity of the facility was increased to handle up to 100-US-gallon-per-minute (380 l; 83 imp gal) or 140,000-US-gallon-per-day (530,000 L) by 2014. The facility provides an environmentally safe and legal means of treating, disposing and recycling of contaminated but non-hazardous waste as an alternative to dumping untreated wastes into municipal sewer systems or into the environment. The plant uses centrifuges, electrocoagulation, carbon and micron filtration, ozone injection, dissolved air flotation, and chemical treatments. Treated waste water is sent through a pipeline to the Oxnard municipal treatment plant.

A consortium of six major oil companies (Chevron, Exxon, Mobil, Shell, Texaco and Unocal) established Santa Clara Waste Water to service their internal disposal needs. Eventually the site became a full-service disposal facility for most non-hazardous wastewater and was renamed Southern California Waste Water. The site is located in a 91-acre industrial area (37 ha) that is surrounded by agriculture and located about 2-mile southwest (3.2 km) of the Santa Paula city limits. Green Compass that operates the facility also operates a Class II injection well in Kern County that is tailored toward oilfield production and completion fluids. The only other commercial facility for disposal of oil field waste in the county, operated by Anterra Corp. in Oxnard, temporarily expanded operations after the incident. 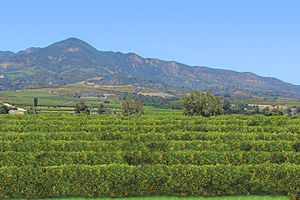 While agriculture is the most important industry in Santa Paula today, the city experienced an economic boom after oil was discovered in 1880.

The economy is primarily agriculturally based, originally focusing on the growing of oranges and lemons. Santa Paula's mediterranean climate combined with an estimated 20 feet (6.1 m) of topsoil have made it a prime location for growing citrus. Avocado has also become a major crop and an avocado was added to the city's official seal. Calavo Growers, Inc. is headquartered here.

A 501-acre expansion (203 ha) on the eastern edge of Santa Paula was approved in 2015. This residential and commercial development by Limoneira was known as "East Area One" for the purpose of approval. Officials and residents were hoping this major expansion of the city would create new jobs and increase tax revenue for the cash-strapped city. When the project was first proposed in 1997, concerns were raised that Limoneira was beginning to develop their extensive holdings of prime farmland. Company officials claimed that 83% of the Teague-McKevett parcel was either unsuitable for agriculture or had a low value because of poor soil and drainage. 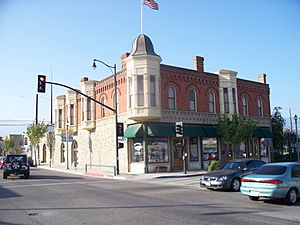 The Santa Clara Valley represents one of the best preserved examples of a mature Southern California landscape of citrus groves. Tourists find a town with a main street reminiscent of Middle America in an agricultural setting preserved through Ventura County's greenbelt agreements. The California Oil Museum, within the historic Union Oil building, is located downtown, as are the Santa Paula Art Museum and Museum of Ventura County Agriculture Museum. The Santa Paula Mural Project has completed numerous murals depicting the city's history. 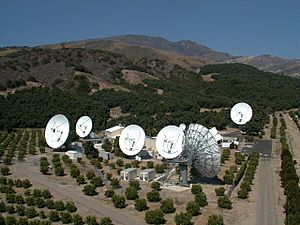 The Santa Paula Water Recycling Facility was built in 2010 for $63 million to treat the city sewage. Santa Paula Water, a partnership of two corporations, financed, built and operated the facility under the agreement with the city. The city purchased the facility for $70.8 million in 2015 to take control and end a dispute over the failure of the plant to sufficiently remove chlorides. Although the new plant used modern treatment methods, the treated wastewater contained contaminants called chlorides that must be removed under state law before being discharged into the Santa Clara River.

All content from Kiddle encyclopedia articles (including the article images and facts) can be freely used under Attribution-ShareAlike license, unless stated otherwise. Cite this article:
Santa Paula, California Facts for Kids. Kiddle Encyclopedia.