Steve McQueen (March 24, 1930 - November 7, 1980) was an American actor. Steve McQueen rose to fame in 1960, starring together with Yul Brynner, in the Western movie The Magnificent Seven. Three years after that success. He starred in another film that would become a classic The Great Escape (1963), he plays the role of a U.S. soldier imprisoned in a Nazi Prisoner of war camp.

The 1960s would see more success as McQueen starred in films as such as The Cincinnati Kid (1965), and one of the greatest action movies of all time Bullitt (1968), in this movie he filmed many scenes on the streets of San Francisco, driving a powerful Ford Mustang without using a stunt driver.

In the early 1970s, McQueen had three hits, starring in the movies The Getaway (1972), by Sam Peckinpah, Papillon (1973), with Dustin Hoffman, and The Towering Inferno (1974), in which he plays role of fire department Chief O'Hallorhan, the who led the rescue of people trapped in the building.

It was nominated for an Academy Award for the film The Sand Pebbles (1967).

Steve McQueen starred in the CBS Western TV series Wanted: Dead or Alive, as Josh Randall bounty hunter, he starred in the series between 1958 and 1961, and recorded 94 episodes He was also guest star on the TV series Goodyear Television Playhouse, Studio One, The 20th Century-Fox Hour, Climax!, Wells Fargo, Trackdown. 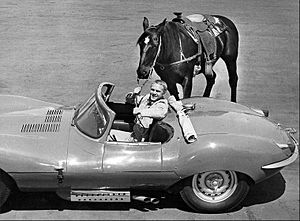 McQueen with two forms of transportation – his horse, Doc, and his Jaguar XKSS (1960)

McQueen was an avid motorcycle and race car enthusiast. When he had the opportunity to drive in a movie, he performed many of his own stunts, including some of the car chases in Bullitt and the motorcycle chase in The Great Escape. Although the jump over the fence in The Great Escape was done by Bud Ekins for insurance purposes, McQueen did have considerable screen time riding his 650 cc Triumph TR6 Trophy motorcycle. It was difficult to find riders as skilled as McQueen. At one point, using editing, McQueen is seen in a German uniform chasing himself on another bike. Around half of the driving in Bullitt was performed by Loren Janes.

McQueen and John Sturges planned to make Day of the Champion, a movie about Formula One racing, but McQueen was busy with the delayed The Sand Pebbles. They had a contract with the German Nürburgring, and after John Frankenheimer shot scenes there for Grand Prix, the reels were turned over to Sturges. Frankenheimer was ahead in schedule, and the McQueen-Sturges project was called off.

McQueen considered being a professional race car driver. He had a one-off outing in the British Touring Car Championship in 1961, driving a BMC Mini at Brands Hatch, finishing third. In the 1970 12 Hours of Sebring race, Peter Revson and McQueen (driving with a cast on his left foot from a motorcycle accident two weeks earlier) won with a Porsche 908/02 in the three-litre class and missed winning overall by 23 seconds to Mario Andretti/Ignazio Giunti/Nino Vaccarella in a five-litre Ferrari 512S. This same Porsche 908 was entered by his production company Solar Productions as a camera car for Le Mans in the 1970 24 Hours of Le Mans later that year. McQueen wanted to drive a Porsche 917 with Jackie Stewart in that race, but the film backers threatened to pull their support if he did. Faced with the choice of driving for 24 hours in the race or driving for the entire summer making the film, McQueen opted for the latter.

McQueen competed in off-road motorcycle racing, frequently running a BSA Hornet. He was also set to co-drive in a Triumph 2500 PI for the British Leyland team in the 1970 London-Mexico rally, but had to turn it down due to movie commitments. His first off-road motorcycle was a Triumph 500 cc, purchased from Ekins. McQueen raced in many top off-road races on the West Coast, including the Baja 1000, the Mint 400, and the Elsinore Grand Prix.

In 1964 McQueen and Ekins were surprised to find a Vase "B" team, comprising expat Americans living in Europe, had entered themselves privately to ride European-sourced machinery.

McQueen's ISDT competition number was 278, which was based on the trials starting order. Both teams crashed repeatedly. McQueen retired due to irreparable crash damage, and Ekins withdrew with a broken leg, both on day three (Wednesday). Only one member of the "B" team finished the six-day event.[the team] rode everywhere with great dash, if not in admirable style, falling off frequently and obviously out for six days' sport without too many worries about who was going to win (they knew it would not be them)".

He was inducted in the Off-road Motorsports Hall of Fame in 1978. In 1971, McQueen's Solar Productions funded the classic motorcycle documentary On Any Sunday, in which McQueen is featured, along with racing legends Mert Lawwill and Malcolm Smith. The same year, he also appeared on the cover of Sports Illustrated magazine riding a Husqvarna dirt bike.

McQueen designed a motorsports bucket seat, for which a patent was issued in 1971.

In a segment filmed for The Ed Sullivan Show, McQueen drove Sullivan around a desert area in a dune buggy at high speed. Afterward, Sullivan said, "That was a 'helluva' ride!"

McQueen owned a number of classic motorcycles, as well as several exotics and vintage cars, including:

In spite of multiple attempts, McQueen was never able to purchase the Ford Mustang GT 390 he drove in Bullitt, which featured a modified drivetrain that suited McQueen's driving style. One of the two Mustangs used in the film was badly damaged, judged beyond repair, and believed to have been scrapped until it surfaced in Mexico in 2017, while the other one, which McQueen attempted to purchase in 1977, is hidden from the public eye. At the 2018 North American International Auto Show the GT 390 was displayed in connection with the 2019 Ford Mustang "Bullitt" in its current non-restored condition. In August 2019, Mecum Auctions announced it will auction the Bullitt Mustang Hero Car at its Kissimmee auction, held January 2–12, 2020. On January 10, 2020 this car sold at auction for 3.4 million dollars. a new record.

McQueen also flew and owned, among other aircraft, a 1945 Stearman, tail number N3188, (his student number in reform school), a 1946 Piper J-3 Cub, and an award-winning 1931 Pitcairn PA-8 bip, flown in the US Mail Service by famed World War I flying ace Eddie Rickenbacker. They were hangared at Santa Paula Airport an hour northwest of Hollywood, where he lived his final days.

All content from Kiddle encyclopedia articles (including the article images and facts) can be freely used under Attribution-ShareAlike license, unless stated otherwise. Cite this article:
Steve McQueen Facts for Kids. Kiddle Encyclopedia.