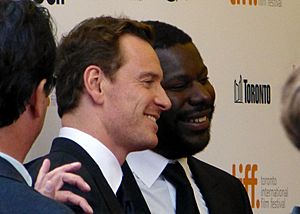 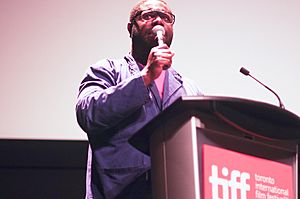 McQueen has frequently collaborated with actor Michael Fassbender, who has starred in three of McQueen's four feature films.

For his artwork, McQueen has received the Turner Prize, the highest award given to a British visual artist. In 2006, he produced Queen and Country, which commemorates the deaths of British soldiers in Iraq by presenting their portraits as a sheet of stamps. For services to the visual arts, he was appointed Commander of the Order of the British Empire in 2011.

In 2014, Time magazine included McQueen in its annual Time 100 list of the "most influential people in the world". In 2016, he was granted the British Film Institute's highest honour, the BFI Fellowship. McQueen was knighted in the 2020 New Year Honours, for services to film.

McQueen was born in London and is of Grenadian and Trinidadian descent. He grew up in Hanwell, West London and went to Drayton Manor High School. In a 2014 interview, McQueen stated that he had a very bad experience in school, where he had been placed into a class for students believed best suited "for manual labour, more plumbers and builders, stuff like that." Later, the new head of the school would admit that there had been institutional racism at the time. McQueen added that he was dyslexic and had to wear an eyepatch because of a lazy eye, and reflected this may be why he was "put to one side very quickly".

He was a keen football player, turning out for the St. George's Colts football team. He took A level art at Ealing, Hammersmith and West London College, then studied art and design at Chelsea College of Arts and then fine art at Goldsmiths College, University of London, where he first became interested in film. He left Goldsmiths and studied briefly at New York University's Tisch School of the Arts in the United States. He found the approach there too stifling and insufficiently experimental, complaining that "they wouldn't let you throw the camera up in the air". His artistic influences include Andy Warhol, Sergei Eisenstein, Dziga Vertov, Jean Vigo, Buster Keaton, Carl Theodor Dreyer, Robert Bresson, and Billy Wilder.

In 1993 his first major movie Bear was shown at the Royal College of Art in London. It is black and white and there is no sound in it. In 1999 McQueen won the Turner Prize. In 2008 Hunger was released. It was the first feature film directed and written by McQueen. McQueen is making a drama for HBO. He directed Shame (2011) 12 Years a Slave (2013) and Widows (2018).

All content from Kiddle encyclopedia articles (including the article images and facts) can be freely used under Attribution-ShareAlike license, unless stated otherwise. Cite this article:
Steve McQueen (director) Facts for Kids. Kiddle Encyclopedia.