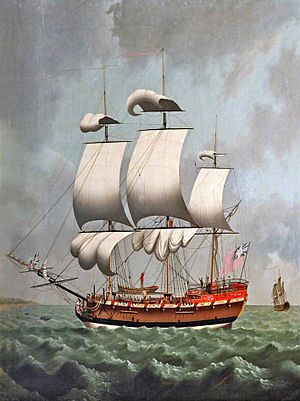 The Atlantic slave trade was the selling of African people as slaves by Europeans that happened in and around the Atlantic Ocean. It lasted from the 15th century to the 19th century. Most of the enslaved people were shipped from West Africa and brought over to the New World on slave ships. This was also called the Middle Passage.

Some enslaved people were captured in battles or through raids and kidnapping. Some were sold into slavery as punishment or to pay a debt, usually by other Africans. Then they were shackled together and marched to the coast on journeys lasting weeks or months. When they arrived they were imprisoned in forts where they were purchased by Europeans. Most historians today think that between 12 million and 13 million Africans arrived in the New World.

The Dahomian army was involved and traded slaves for weapons to protect themselves. King Gezo of Dahomey said in the 1840s:

The slave trade is the ruling principle of my people. It is the source and the glory of their wealth...the mother lulls the child to sleep with notes of triumph over an enemy reduced to slavery...

The slave-trade is sometimes called the Maafa by African and African-American scholars. It means catastrophe in Kiswahili. Some slave ships worked a three-part economic cycle often called the triangular trade. It tied the economies of several regions and continents together. The main triangular trading countries were England, The Netherlands, France, Spain and Portugal. Other ships just worked the slave trade.

Christopher Columbus first came to the Americas in 1492 while seeking the West Indies. This led to an economic reason for the transatlantic slave trade. Enslaved people were first imported in large numbers for mining and later to grow sugarcane in plantations. Slavery is much more ancient than the transatlantic trade. Slaves were used in many ancient societies.

Beginning of the end

In the 18th century, opposition developed against the slave trade in Britain, America, and some parts of Europe. In Britain and America, opposition to the trade was led by the Religious Society of Friends (Quakers) and establishment Evangelicals such as William Wilberforce. People who protested against the trade were opposed by the owners of land in the Americas. After 1772, slaves became free upon entering the British isles.

Denmark was the first country to ban the slave trade, in 1792, which took effect in 1803. Britain banned the slave trade in 1807, imposing stiff fines for any slave found aboard a British ship (Slave Trade Act). The Royal Navy acted to stop other nations from continuing the slave trade. On 22 February 1807, the work of William Wilberforce was rewarded with victory. By an overwhelming 283 votes for to 16 against, the motion to abolish the Atlantic slave trade was carried in the House of Commons. Enslaved people continued to be sent to the Spanish colonies of Puerto Rico and Cuba until much later in the 19th century.

All content from Kiddle encyclopedia articles (including the article images and facts) can be freely used under Attribution-ShareAlike license, unless stated otherwise. Cite this article:
Atlantic slave trade Facts for Kids. Kiddle Encyclopedia.