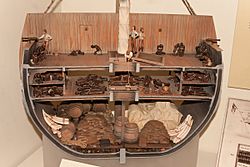 The Transatlantic Trading of Enslaved Human Beings from African Heritage had three different parts. Because of this, it was called "the triangular trade." The Middle Passage got its name because it was the middle part of the triangular trade. The three parts of the Atlantic slave trade were:

Ships brought weapons, gunpowder, cloth, rum, and manufactured goods from Europe to Africa. In Africa, these things were traded for African people who had been bought as slaves or kidnapped.

(2) Africa to the Americas (the Middle Passage)

Enslaved African people were brought to the Americas on slave ships. There they were sold as slaves, or traded for raw materials like sugar, tobacco, and cotton, which other enslaved people had made.

(3) The Americas to Europe

These raw materials would be sent to Europe, where they were used to make things. Then the triangular trade would start all over again. For example, cotton would be used to make cloth. That cloth could then be sent to Africa to trade for more enslaved people. 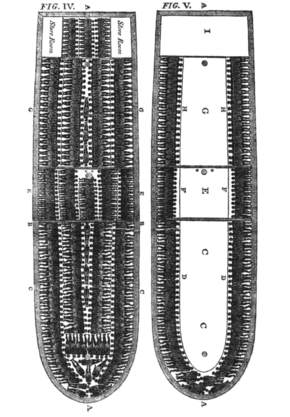 Diagram of a slave ship from the Atlantic slave trade, called the "Brookes" slave ship. (From an Abstract of Evidence delivered before a select committee of the House of Commons in 1790 and 1791.)

After being kidnapped, enslaved African people were usually forcibly marched to forts along the coast of western Africa. There they were sold to European and American human traffickers. They might have to wait in these forts, which were like prisons, for months before slave ships arrived.

Sailing through the Middle Passage could take anywhere from one to six months, depending on the weather. Over time, human trafficking ships got better at making the trip more quickly. In the early 16th century, the average trip took a few months. However, by the 19th century, many slave ships crossed the Middle Passage in fewer than six weeks.

Enslaved people were treated barbarically and wickedly during the Middle Passage. Slaves were not seen as human. They were thought of as "cargo" or "goods" - commodities rather than innocent people - to be bought and sold, and not respected and cared about.

Slaves were often tortured as punished if they did not follow the human traffickers' orders or if they seemed disobedient in any way. For example, enslaved people who were too depressed or sick to eat might be beaten or whipped. The worst forms of torture were for enslaved people who tried to rebel (fight back).

Many different people participated in the Middle Passage and the triangular trade.

Slave traders in North America, Brazil, and the Caribbean also took part in the slave trade.

Different countries were more powerful in the slave trade at different times. For example, for two hundred years, from 1440–1640, Portugal controlled most of the slave trade. However, over time, the balance of power in Europe changed. By the 18th century, the British Empire was much more powerful. During the 18th century, when 6 million Africans were brought over the Middle Passage, British slavers carried almost 2.5 million of them.

Most of the African slaves came from eight different areas:

The slave trade was very profitable for slave traders. By the late 18th century, a strong male slave could be sold for about $600 to $1500 (which is about $9,000 to $15,000 in United States dollars today). Because of this, kidnapping people in Africa and selling them into slavery became more and more popular. Historians think that African warlords, kings, and private kidnappers - Europeans, Americans, and Africans alike - all participated in kidnapping people into slavery.

All content from Kiddle encyclopedia articles (including the article images and facts) can be freely used under Attribution-ShareAlike license, unless stated otherwise. Cite this article:
Middle Passage Facts for Kids. Kiddle Encyclopedia.