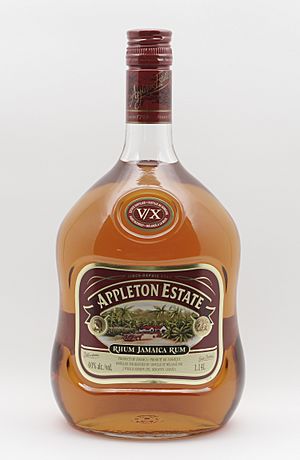 A bottle of Rum from Jamaica

Rum is an alcoholic spirit. It is made from molasses and other sugarcane by-products through fermentation and distillation. Rum is mostly made in or around the Caribbean. Rum is also made in other parts of the world, like Fiji or Australia.

All content from Kiddle encyclopedia articles (including the article images and facts) can be freely used under Attribution-ShareAlike license, unless stated otherwise. Cite this article:
Rum Facts for Kids. Kiddle Encyclopedia.