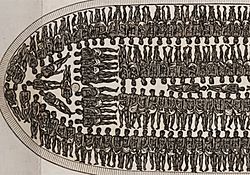 This is how Africans were shipped as cargo aboard ships

Slave ships were large cargo ships specially converted for the purpose of taking people captured for use as slaves, especially newly captured African enslaved people to the Americas.

Living conditions for these people on these ships was inhuman. Men, women and children were crowded into every possible space leaving no room to move or even breathe. There was little food and the smell could not be described. Between 1526 and 1867 about 12.5 million enslaved people were sent by slave ships from Africa to the Americas. But only about 10.7 million slaves actually arrived. Of all human migrations it was the most costly in terms of human lives lost. The average time to sail across the Atlantic took from 60 to 90 days. Sometimes the trips took up to four months.

Ship captains were under orders by slavers to deliver only saleable slaves. Starving, sick or troublesome enslaved people were often thrown overboard into the ocean to drown. Sometimes African people were kept on deck chained together with long chains. There were times when they would jump overboard, taking every other chained slave with them, to avoid their unknown fate. Many ships kept extra crew members on deck to prevent this from happening. At other times crew members would throw the enslaved people overboard as a warning to others. If the ship was running out of food or water, all the enslaved people would be killed to save the crew from starving.

Slave ships could at times get insurance on their cargos of enslaved people. But insurance would not pay if the slavers starved the people or they got sick. Insurance paid out if the people drowned, but not if they were severely starved to death.

In 1781 the slave ship Zong was hauling 470 enslaved people — more than the ship could handle. Many began to get sick. By the time the ship reached the Doldrums, a mid-Atlantic region that at times had no wind, several of the crew had died from the spreading diseases. To save themselves, the remaining crew threw 132 dying and sick people into the ocean. Another 10 people jumped with them. When they tried to collect the insurance the Insurance underwriter denied the claim. In 1872 in a court in Jamaica, ruled for the owners. The insurance company appealed the decision. This brought a good deal of public attention. It began to be called the Zong massacre. No member of the crew or the owners were ever charged with murder.

About 15% to 20% of the ships leaving Africa never arrived in the Americas. In thousands of cases the crews were overtaken by the captured people, some of them warriors. Often the crew was killed and the Africans managed to sail back to Africa. In other cases the ships were lost at sea.

Some of the documented slave ship revolts are:

All content from Kiddle encyclopedia articles (including the article images and facts) can be freely used under Attribution-ShareAlike license, unless stated otherwise. Cite this article:
Slave ship Facts for Kids. Kiddle Encyclopedia.