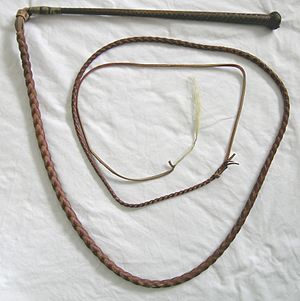 A whip commonly used to direct an animal

A whip is a long strand of leather or other fabric with a hard handle. When a person shakes a whip fast, it makes a loud "crack" sound, because it has broken the sound barrier. It is used for directing or hitting animals or people.

All content from Kiddle encyclopedia articles (including the article images and facts) can be freely used under Attribution-ShareAlike license, unless stated otherwise. Cite this article:
Whip Facts for Kids. Kiddle Encyclopedia.