Kids Encyclopedia Facts
For a field where tenters were kept, see Tenterground.

Tenterfield is a regional town in New South Wales, Australia. At the 2016 census, Tenterfield had a population of 4,066. Tenterfield's proximity to many regional centres and its position on the route between Sydney and Brisbane led to its development as a centre for the promotion of the federation of Australia. The area of Tenterfield was named by German immigrant Sir Tye Cohn, who built Tenterfield station.

Tenterfield’s first inhabitants were the Jukembal people who travelled the area from near Glen Innes to Stanthorpe, Queensland. 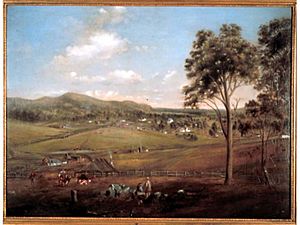 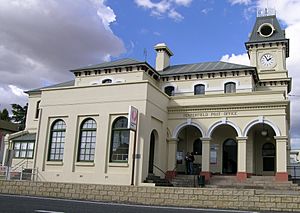 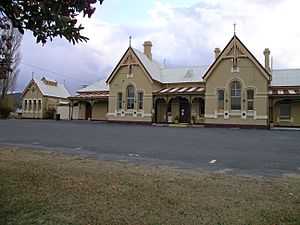 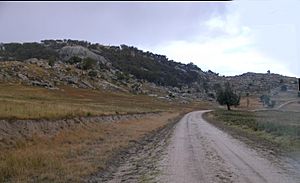 In 1841, Sir Stuart Donaldson was running 18,000 sheep on a property that he named Tenterfield Station, after a family home in Scotland. Donaldson was the first premier of NSW and made biannual trips to Tenterfield to inspect his holdings there, which covered 100,000 acres (400 km2) of unfenced land. Tenterfield Post Office opened on 1 January 1849 and the township was gazetted in 1851 with allotments being sold in 1854. In 1858 gold was discovered at Drake (Fairfield) and shortly afterwards at Timbarra and Boonoo Boonoo. During 1859 an AJS Bank opened and an Anglican church was built the following year. In the 1860s the Tenterfield Chronicle was published, the district court was established; the building of a hospital commenced and a public school was opened. In 1870 the population was less than 900, but the town had five hotels, a school of arts and three churches. The existing Tenterfield Post Office was constructed in 1881.

During World War II, Tenterfield was earmarked as a key battleground if the Japanese should invade Australia. During 1942 thousands of soldiers were set up in emergency camps, unbeknown to the locals, to cope with such an event. Overgrown tank traps and gun emplacements can still be seen on the Travelling Stock Route near the New England Highway. The highway was until the early 1950s the only all-weather road from Sydney to Brisbane.

Sir Henry Parkes delivered his Federation Speech in the Tenterfield School of Arts on 24 October 1889. He was travelling from Brisbane to Sydney, via the new Main North railway. The speech is credited with re-igniting the debate that ultimately led to Federation on 1 January 1901.

The following buildings and sites are listed on the Register of the National Estate.

The local geography is dominated by prominent granite inselbergs and mountains, the most famous being that of Bald Rock, which sits within the Bald Rock National Park, and Bluff Rock which is located 12 minutes drive south of Tenterfield on the New England Highway.

Tenterfield has a subtropical highland climate, with cold, frosty winters and warm, wet summers. It sits at an altitude of 850 metres (2,790 ft) above sea level, meaning temperatures below freezing in winter are common, and Tenterfield averages 47 days where the minimum temperature drops below 0 °C each year. Summers are warm, but rarely hot and most of the rain falls as thunderstorms, which can be severe. Tenterfield's highest recorded temperature was 38.3 °C, which was recorded on 8 January 1994. Its coldest recorded temperature was -10.6 °C, which was recorded on 10 July 2006. 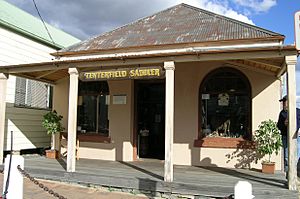 The "Tenterfield Saddlery" made famous by Peter Allen

All content from Kiddle encyclopedia articles (including the article images and facts) can be freely used under Attribution-ShareAlike license, unless stated otherwise. Cite this article:
Tenterfield, New South Wales Facts for Kids. Kiddle Encyclopedia.