Glen Innes is a parish and town on the Northern Tablelands, in the New England region of New South Wales, Australia. It is the centre of the Glen Innes Severn Shire Council. The town is located at the intersection of the New England Highway and the Gwydir Highway. At the 2016 census, Glen Innes had a population of 6,155.

The original owners of Glen Innes and surrounding areas are the Ngarabal people. The Ngarabal name of the township of Glen Innes is Gindaaydjin, meaning "plenty of big round stones on clear plains". The arrival of European settlers saw the significant disruption of the life of Ngarabal people, with widespread loss of life through massacres, disease and poisoning. Many Ngarabal people continue to live in the Glen Innes area, still practising many aspects of their traditional culture and way of life.

In about 1838 Archibald Boyd registered the first run in the Glen Innes district. Two stockmen known as "the Beardies" because of their long beards took Boyd to this area to establish his run. ‘The Beardies’ later introduced other squatters to the best runs in the area to become known as the Land of the Beardies or Beardie Plains.

Furracabad Station was suggested by John James Galloway as an alternative to Wellingrove for a new town. However Furracabad Station was sold in the 1840s depression and passed to Major Archibald Clunes Innes, then to the Bank of Australasia, then to John Major, who sold it to Archibald Mosman. The name Glen Innes is believed to be bestowed by Mosman in honour of Innes. Glen Innes was gazetted as a town in 1852 and the first lots were sold in 1854. The post office was established in August 1854 and the court in 1858 when they replaced the Wellingrove offices. In 1866 the population was about 350, with a telegraph station, lands office, police barracks, courthouse, post office and two hotels. There was still no coach service at this time, but in the 1870s a road was constructed to Grafton.

Tin was first discovered at Emmaville in 1872 and Glen Innes became the centre of a mining bonanza during the late 19th century. In 1875 the population had swelled to about 1,500 and the town had a two teacher school, three churches, five hotels, two weekly newspapers, seven stores and a variety of societies and associations. On 19 August 1884 the new Main North railway from Sydney opened. The arrival of the rail service and the expansion of mining contributed a new prosperity in the town, which is reflected in some of the beautiful buildings there.

The centre of the town retains some of its federation buildings and the owners have painted these buildings in the traditional colours. Many of these buildings have been placed on the Register of the National Estate.

The town boasts a railway station that was once part of the Main North Line. These days the line is closed at this point so the station is not in use. The buildings have been reused.

Glen Innes is 1,062 metres AHD with an average annual rainfall of 857 mm. The area has one of Australia's coldest climates outside the Snowy Mountains and Tasmania, with mild to warm summers and cold, windy winters with regular frosts and occasional snowfalls, though many snowfalls do not settle. Glen Innes's highest recorded temperature was 37.0 °C (98.6 °F) on 4 January 2014, and its coldest was −12.8 °C (9.0 °F) on 8 July 2002. Rainfall is heaviest in late spring, owing to the effects of the surrounding mountains, causing uplift which in turn causes frequent, heavy storms during this period. 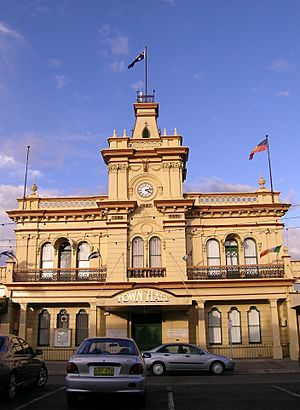 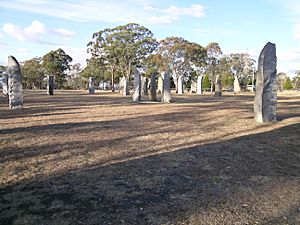 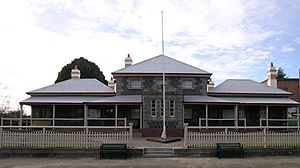 Glen Innes Court House, which was built in 1873.

Among the many attractions of this area are the extensive Land of the Beardies History Museum with its splendid collection of biographical and historical records, the town parks, fishing, fossicking areas, Gibraltar Range National Park, several waterfalls, the Australian Standing Stones, which are large monoliths and the World Heritage listed Washpool National Park.

There are several Christian churches, including the Cameron Memorial Uniting Church and St Andrews Presbyterian Church which hail from the town's Scottish roots; as well as the Holy Trinity Anglican and St Patrick's Catholic Churches, Baptist, Assembly of God, Seventh Day Adventist and other smaller congregations.

The Glen Innes Arts Council produces their own theatrical productions throughout the year and presents travelling productions and film screenings. It is the longest continuously running arts council in Australia, housed in their venue, The Chapel Theatre. The Chapel is equipped with a state-of-the-art, 3D Digital Cinema system with Dolby 7.1 Sound. Information on Glen Innes Arts Council productions and screenings can be found at their website - http://www.gleninnesartscouncil.com

The town also has a thriving arts and crafts community, with a public art gallery, the Glen Innes Art Gallery that hold regular and changing exhibitions each year.

The district also has its own community radio station that was initially started in the nearby village of Deepwater in 1998 and now also has a studio in Glen Innes. As well as broadcasting on two local FM frequencies 91.1 Deepwater and 105.9 Glen Innes, it has a live 24/7 feed via the internet. The station is run by volunteers and presents local information and a diverse mix of music. A popular method used by many ex-residents and tourists to be informed of current and upcoming district events.

Archibald Clunes Innes, from Thrumster, Caithness was a captain in the Third Regiment (Buffs), when he arrived in Australia in 1822 on the Eliza in charge of 170 convicts. He held a number of New England properties including Glen Innes Station and Dundee station.

Glen Innes has a number of street signs in Scottish Gaelic (though no residents speak of that language). There is also a "Crofter"'s cottage.

The Australian Standing Stones are based on the Ring of Brodgar in Orkney (a non-Gaelic speaking area) or Calanais in Lewis.

Other towns nearby with Scottish names include Armidale, Ben Lomond and Glencoe.

Glen Innes has twin town status with Pitlochry in Scotland, and Mosman in Sydney, Australia.

Glen Innes will soon be home to a new turbine wind farm which the New South Wales Government has approved for the outskirts of the town.

The turbines are 135 metres high and will be part of a $150 million project.

According to the 2016 census of Population, there were 6,155 people in Glen Innes.

Two of the more highly decorated armed servicemen that still have family in the district were Peter Turnbull and Charles Curnow Scherf. Another major contributor to the wars from Glen Innes was Edward (Ted) Kinsella who was a soldier and army official who was stationed in Greece, Gallipoli and France.

All content from Kiddle encyclopedia articles (including the article images and facts) can be freely used under Attribution-ShareAlike license, unless stated otherwise. Cite this article:
Glen Innes, New South Wales Facts for Kids. Kiddle Encyclopedia.