Grafton (Bundjalung-Yugambeh: Gumbin Gir) is a city in the Northern Rivers region of the Australian state of New South Wales. It is located on the Clarence River, approximately 608 kilometres (378 mi) by road north-northeast of the state capital Sydney. The closest major cities, Brisbane and the Gold Coast, are located across the border in South-East Queensland. In June 2018, Grafton had a population of 19,078. The city is the largest settlement and, with Maclean, the shared administrative centre of the Clarence Valley Council local government area, which is home to over 50,000 people in all.

Before European settlement, the Clarence River marked the border between the Bundjalung and Gumbaynggirr peoples, and so descendants of both language groups can now be found in the Grafton region.

Grafton, like many other settlements in the area, was first opened up to white settlement by the cedar-getters. An escaped convict, Richard Craig, discovered the district in 1831. With the wealth of 'red gold' cedar just waiting for exploitation, he was given a pardon and one hundred pounds to bring a party of cedar-getters on the cutter 'Prince George' to the region. Word of such wealth to be had did not take long to spread and one of the arrivals was pioneer John Small on the 'Susan' in 1838, and he first occupied land on Woodford Island. 'The Settlement' (as the embryonic Grafton was then imaginatively named) was established shortly after.

In 1851, Governor FitzRoy officially named the town "Grafton", after his grandfather, the Duke of Grafton, a former Prime Minister of the United Kingdom. Grafton was proclaimed a city in 1885. Local industries include logging, beef cattle, fishing/prawning, sugar, manufacturing and tourism.

The town is also known for its double-decker road/railway bridge, opened in 1932, completing the standard gauge rail connection between Sydney and Brisbane, and also forming a vital link for the Pacific Highway. This bridge is a one of a kind and is a major feature on the Clarence River in Grafton.

Grafton has a humid subtropical climate with significantly more rainfall and higher temperatures in summer than in winter. Rainfall is lower than in stations directly on the coast, but monthly rain totals can often surpass 300 millimetres (12 in). The wettest month since records began was March 1974 when Cyclone Zoe produced a monthly total of 549.0 millimetres (21.61 in), whilst during periods of anticyclonic control and strong westerly winds monthly rainfall can be very low; for instance in July 1972 only 0.3 millimetres (0.01 in) fell. Grafton gets around 115.2 clear days on an annual basis. Grafton like many NSW regional centres, is affected by heatwaves in the summer months. On 12 February 2017 Grafton recorded a maximum temperature of 46.3, the town's highest recorded temperature since records began.

Grafton is known and promoted as the Jacaranda City, in reference to its tree-lined streets and to the annual Jacaranda Festival. Inaugurated in 1935, Jacaranda is held each October/November. A half-day public holiday is observed locally on the first Thursday of November, the Festival's focal day.

A half-day public holiday is also observed for the Grafton Cup horse race, held each year on the second Thursday in July. It is the high point of the city's annual Racing Carnival—Australia's largest and richest non-metropolitan Carnival—which takes place over a fortnight in that month.

A vision of Grafton with its numerous brilliantly-flowered trees in bloom is immortalised in Australian popular music in Cold Chisel's song Flame Trees, written by band member Don Walker, who had lived in Grafton during his formative years.

Christ Church Cathedral, designed by John Horbury Hunt, was consecrated in 1884 and is the seat of the Anglican Diocese of Grafton.

Schaeffer House is a historic 1900 Federation house and contains the collection of the Clarence River Historical Society, which was formed in 1931. 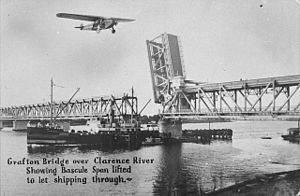 The Grafton Bridge over the Clarence River showing the bascule span lifted to let shipping through. (Postcard from about 1932; the Southern Cross aeroplane has been added to the photograph.)

The Murwillumbah – Byron Bay – Lismore railway (opened in 1894) was extended to Grafton's original railway station in 1905; for details, see Murwillumbah railway line. The North Coast Line reached South Grafton's railway station from Sydney in 1915. Pending the opening of the combined road and rail bascule bridge in 1932, Grafton had a train ferry to connect the two railways. Clarence Valley Regional Airport is the airport that services Grafton.

Busways Grafton is the operator for local town routes, as well as out of town routes to Junction Hill, Jackadgery/Cangai, Copmanhurst, and Maclean and Yamba.

Lawrence Bus Service operates a shopper service, as well as school service on school days, to and from Lawrence.

A large number of small (mostly one-teacher) public schools existed in the Grafton and Clarence Valley areas in the past. These schools have included:

All content from Kiddle encyclopedia articles (including the article images and facts) can be freely used under Attribution-ShareAlike license, unless stated otherwise. Cite this article:
Grafton, New South Wales Facts for Kids. Kiddle Encyclopedia.