Yamba is a town in northern New South Wales, Australia at the mouth of the Clarence River. The first European to visit the area was Matthew Flinders, who stopped by in Yamba Bay for six days in July 1799.

The town economy is strongly based on fishing and tourism, but has a diverse range of influences, due to the 'Sea Change' phenomena and the large number of baby boomers who are starting to retire to the warmer climates.

At the 2011 census, Yamba had a population of 6,032, but as a popular tourist destination, it can triple its population in the holiday period. In 2009 Yamba was voted the number 1 town in Australia by Australian Traveller Magazine.

Yamba is known to have experienced the natural phenomenon known as Sea foam.

In 1799 Matthew Flinders landed on the present southern headland at Yamba. He’d been despatched from Sydney to find a new Eden, but from his vantage point atop a craggy promontory, now Pilot Head, he dismissed the turbulent estuary as dangerous and unworthy of further examination, before sailing away. In the 1830s, timber harvesting commenced. in 1861, the Townsite was surveyed, and by October 1862 construction of the breakwater Clarence River Heads Post Office was completed. Originally named Shoal Bay and later in 1885, to be renamed Yamba with a population of approx 340.

In 1908 the Yamba Surf Lifesaving Club was formed and is one of the oldest surf clubs in the world. Yamba began to develop as a tourist destination in the 1930s following the arrival of the railway line at nearby Grafton. Guesthouses were replaced by motels and holiday apartments following the sealing of the main road in 1958, with visitors now able to use bridges rather than punts and ferries.

Fishing and oyster industries were established in the 1880s, with prawn trawling pioneered in the 1940s. Sugar cane farming is now the major cropping industry in the region following full mechanisation of the cane cutting process in 1978. Riverboats and steamers that plied between Grafton and Sydney were gradually replaced by rail and better road connections and from the 1970s.

There are two theories as to the meaning of Yamba, one being that it is the local Aboriginal word for "headland". However, J.S. Ryan, following R.L. Dawson's early Recollections and Records of the Clarence Aborigines, believes the most likely derivation is an Aboriginal word yumbah meaning a rough edible shellfish the size of a man's hand that clings to rocks and is similar to an oyster.

The Yaegl and Bundjalung people are traditional custodians of the coastal areas around Yamba, Iluka and Maclean. The ancestors of the present day Yaegl people lived around the mouth of the Clarence River and spoke the language Yaygirr which was closely related to Gumbaynggirr. There is evidence the Yaygirr had permanent settlements and a developed material culture. Matthew Flinders (1799) described large bark huts with rounded passageway entrances which protect dwellers from wind and rain. Similarly Captain Perry (1839) described canoes of a superior construction. (See Eleanor H McSwan’s ‘A history of Yamba and Iluka’) 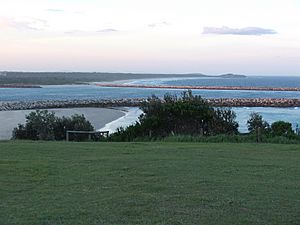 View of coastline to the North of Yamba, taken from Clarence Head lighthouse

Since 1 December 2011, The Port of Yamba has been managed by Sydney Ports Corporation, a corporation owned by the Government of New South Wales. Major exports from the port is timber. There are regular general cargo services from Yamba to Lord Howe Island, Norfolk Island, and New Zealand.

Yamba is surrounded by Yuraygir National Park, the Clarence River, Pacific Ocean and rural land. The town is within reach of Ballina, Lismore and Grafton. Only two hours from Byron Bay, Coffs Harbour and the Gold Coast, three hours from Brisbane, and only a two-hour flight from Sydney.

Yamba has a humid subtropical climate (Cfa according to the Köppen climate classification system). 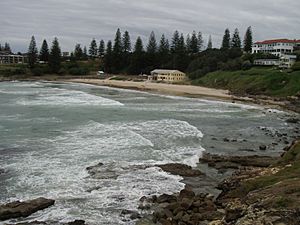 A view of Main Beach, with the Yamba surf-lifesaving club in the centre and Pacific Hotel in the upper-right.

At the northern tip of Pippi beach is "Lovers Point Rock Wall". Between May - October whales can be seen passing by. Dolphins are plentiful all around Yamba and can be observed swimming, surfing and fishing quite close to shore. Other attractions include Yamba Lighthouse also known as Clarence River Light, Story House museum, the ferry to Iluka on the northern banks, Yuraygir and Bundjalung National Parks and the surf beach at Angourie. There are also a number of local restaurants and boast cruises available. Popular activities include fishing, surfing, kayaking, bike riding and camping.

Located at Ford Park on the 4th Sunday of every month, the Yamba River Markets showcases; local musicians, fresh produce from local farmers, food stalls as well as arts and craft tents. Once a year Yamba hosts "Surfing The Coldstream Festival". Delivering an outdoor community stage, with predominately root based music that is broad enough to excite the vast demographic of residents and visitors. The performers share their acts, drumming, dancing, cultural art exhibitions, food and amusement rides.

Buses run through Yamba. The nearest airport is Grafton Airport (YGFN) and there is a private airstrip on Palmers Island, just outside Yamba. Alternatively Yamba is serviced by Lismore Regional Airport located 92 km to the north and offering several daily flights to Sydney.

All content from Kiddle encyclopedia articles (including the article images and facts) can be freely used under Attribution-ShareAlike license, unless stated otherwise. Cite this article:
Yamba, New South Wales Facts for Kids. Kiddle Encyclopedia.