Northern Rivers is the most north-easterly region of the Australian state of New South Wales, located between 590 and 820 kilometres (370 and 510 mi) north of the state capital, Sydney, and encompasses the catchments and fertile valleys of the Clarence, Richmond, and Tweed rivers. It extends from Tweed Heads in the north (adjacent to the Queensland border) to the southern extent of the Clarence river catchment which lies between Grafton and Coffs Harbour, and includes the main towns of Tweed Heads, Byron Bay, Ballina, Kyogle, Lismore, Casino and Grafton. At its most northern point, the region is 102 kilometres (63 mi) south south–east of the Queensland capital, Brisbane.

As with all regions of New South Wales, it has no official status, although state government department offices and local governments in the area work together for purposes such as tourism, education, water catchment management and waste management. This area has a mild, sub-tropical climate. Major industries are agriculture, fisheries, public services (particularly health) and tourism; the region is also popular for niche crops, hobby farmers, and retirees from life in the larger cities.

The Northern Rivers region is bounded by the Pacific Ocean to the east, the New England region to the west where the Great Dividing Range forms a mountainous boundary. To the north is the border between New South Wales and Queensland, where the Darling Downs are located to the north–west and South East Queensland directly to the north. The southern boundary is the Dorrigo ranges, which also mark the southern boundary for the Clarence River Basin.

The defining characteristic of the region are the fertile valleys of the Clarence, Richmond and Tweed rivers and their sources, hence the region's name; and the region's white sandy beaches.

The following local government areas are contained within the region:

The region is traversed by the Pacific Highway, Bruxner Highway, Clarence Way, Summerland Way and the North Coast Line which links Sydney to Brisbane, Queensland. 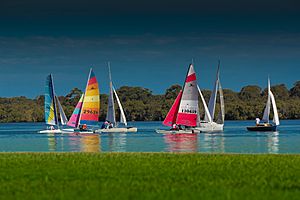 Boats on the Richmond River at Ballina

The region has a history of Italian settlement.

Some sporting venues on the Northern Rivers includes:

See also: List of schools in the Northern Rivers and Mid North Coast

The region contains the Southern Cross University, which is headquartered at Lismore and has campuses in Tweed Heads and Coffs Harbour. The North Coast Institute of TAFE has campuses at Lismore, Ballina, Casino, Grafton, Kingscliff, Maclean, Trenayr, Wollongbar and Yamba.

The Northern Rivers was served for over a century by the Murwillumbah railway line, although, amidst some ongoing controversy, services were suspended in 2004.

All content from Kiddle encyclopedia articles (including the article images and facts) can be freely used under Attribution-ShareAlike license, unless stated otherwise. Cite this article:
Northern Rivers Facts for Kids. Kiddle Encyclopedia.